At least two websites that offer the service of ripping audio files such as MP3s from YouTube videos have been contacted by Google, threatening "legal consequences," reports TorrentFreak. A violation of YouTube's API terms of service is the cited reason for the legal notice, for which the website owners were given seven days to comply.

The websites are YouTube-MP3.org and Music-Clips.net, both of which provide the service of a downloadable audio file for any given YouTube video. (Music-Clips.net offers audio file downloads in a variety of formats from several different video websites, while YouTube-MP3 offers a more streamlined experience with MP3s only.)

Websites such as these are very popular, especially with younger internet users. TorrentFreak conducted an informal survey of younger internet users and found that every single one had used some kind of YouTube conversion service to listen to music on their mobile devices. YouTube-MP3 claims that tens of millions of people have used its services, and estimates that roughly 200 million global users have used a service like it and Music-Clips. It seems that YouTube has become a huge alternative to file sharing websites for unauthorized music downloads. The music labels are not happy with this, unsurprisingly.

Google, which owns YouTube, is also not pleased with these websites, and claims that they are in violation of the terms of service for YouTube's API, though the owner of YouTube-MP3 claims that his website does not use the API to pull YouTube videos. A copy of the letter, written by Associate Product Counsel of YouTube Harris Cohen and sent to Music-Clips, was shared with TorrentFreak. 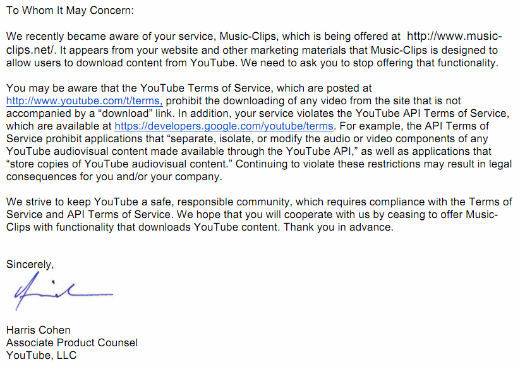 Of course, taking down all such websites will be quite the task, even for Google. YouTube-MP3 and Music-Clips are just two examples of dozens of alternatives that all provide similar services. YouTube-MP3, for its part, has refused to close its service and has demanded to speak directly to a representative of YouTube or Google.