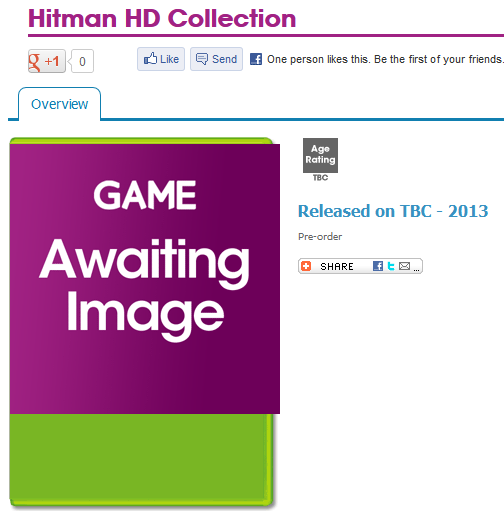 Hitman has been around since the early 2000s, and yet has only received four titles thus far. The fifth, Absolution, should be coming out soon. Your fix of assassinating should be making the leap into full HD graphics soon, even if the older titles are left behind. Or will they?

Information leaked from UK retailer GAME seems to suggest a potential HD collection for the franchise coming out, with three games included. Previously, it had been suggested that a 'Triple Pack' was coming to the PlayStation 3 but now it seems that a full HD collection could be arriving on the 360 as well. Considering IO Interactive's track record, we'd be surprised if the PC was left behind in this deal. The PC was where the Hitman franchise started (Hitman: Codename 47 was a PC exclusive), and every game in the series has received a release on it. No console has received all of the titles, though the PC has.

If the pack is of three games, we could assume they will be Hitman 2: Silent Assassin, Hitman: Contracts, and Hitman: Blood Money. It seems unlikely that Codename 47 will be remastered, for Contracts was a revised version of the game with newer refinements. If Blood Money is remastered it will be unusual. Few games from this current generation have been re-released in this generation, except as Platinum Hits on consoles. Blood Money could be the first, for it was a PS2-era title released on the Xbox 360 as well. The Xbox 360 version of the game was prettier looking, though has dated quite poorly.

Famously, Blood Money encountered issues on the Xbox 360 if you tried to play it on a 50Hz television. The game would only run on 60Hz televisions but this was poorly advertised on the box, and consumers could be left with a game they could not play until they changed their television. It is food for thought though, with monitors now capable of 120Hz. In the space of one console generation we've doubled that. Maybe Blood Money could do with a re-release, for the story probably will hold some relevance to Absolution. While still highly playable, the graphics are hardly inviting by modern standards on any console.

Source: GAME | Link may not remain for long.