HP's Chromebook x360 14 G1 is a mouthful to say, but it's a high-end Chrome OS convertible. It packs an eighth-generation Core i7 vPro CPU, 16GB RAM, and a 14-inch 1080p display. It's primarily designed for businesses, but anyone might be interested in such a machine.

It does have one fatal flaw though, and I won't make you read through the whole review to find out what it is. There's no pen support, which is somewhat of a dealbreaker when it comes to convertible PCs. You can use it as a tablet, but not to draw or take handwritten notes.

Other than that, this machine is phenomenal. Read on.

Made of aluminum, the HP Chromebook x360 14 G1 looks pretty traditional with its silver body. The HP logo that's used is the older one, rather than the one that shows up on premium PCs. Yes, HP has two logos that it puts on laptops. As you'd expect, on the top-left of the lid, there's a Chrome logo. 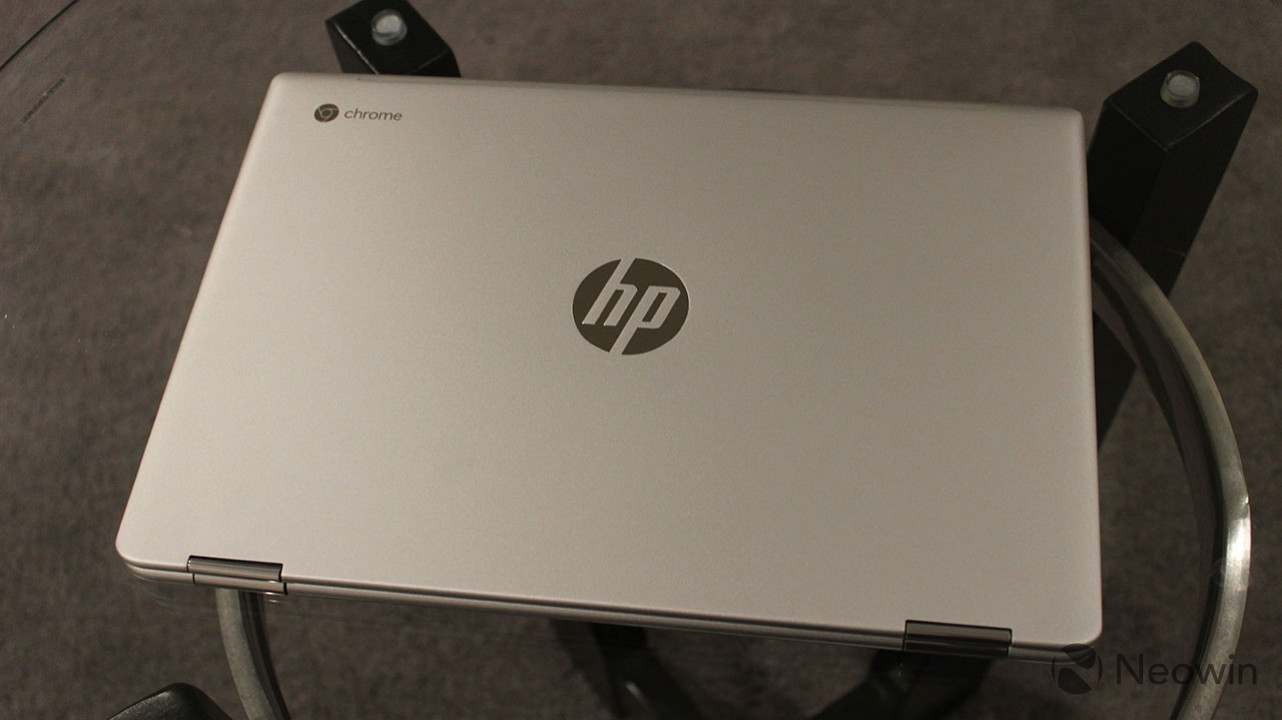 It also weighs in at 3.7 pounds, which is fairly heavy. It's actually the kind of thing where you'll pick it up not expecting it to be as heavy as it is. At 0.63 inches thick, it looks like it's going to be pretty light.

The back side of the PC shows rounded hinges, a departure from the angled edges that HP has been using in its Windows products. I'm going to draw a lot of parallels between the Chromebook x360 and HP's Windows products, because this is supposed to be made for businesses and it seems like the team that made it didn't even talk to the EliteBook team. 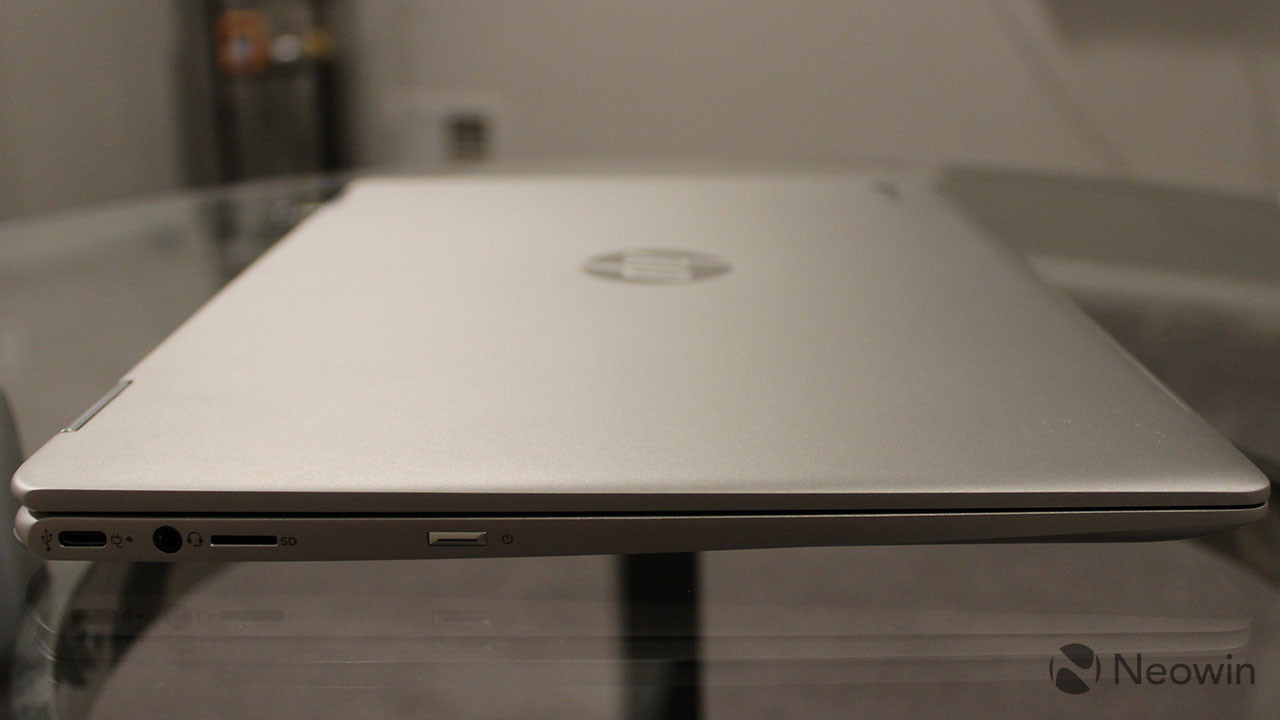 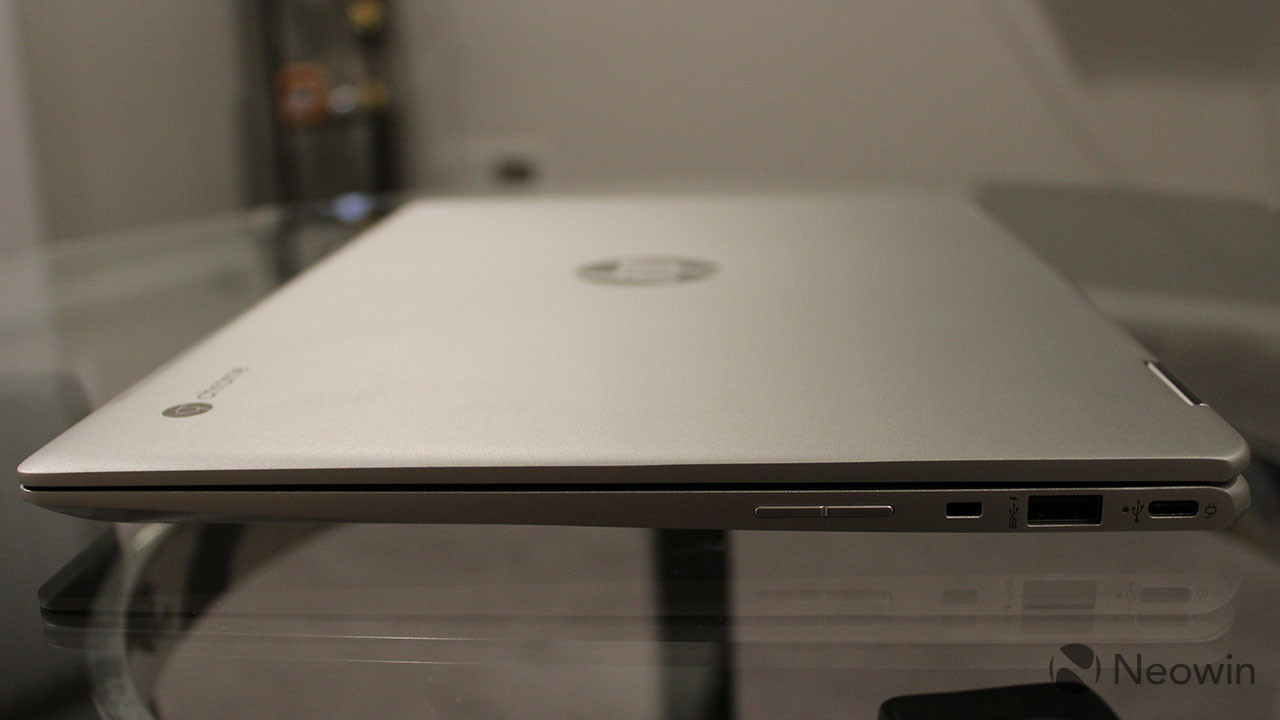 While it's disappointing that there's no Thunderbolt 3 here, it's really nice that there are USB Type-C ports on both sides of this machine. Typically, HP puts them both on the right side, which can sometimes get in the way if you're trying to charge it while you're using it. I've always thought that a power port on both sides makes more sense.

The Chromebook x360 14 G1 also goes through nine different MIL-STD-810G tests, so it should be pretty durable. MIL-STD-810G should mean that it can handle things like extreme temperatures, shocks, humidity, sand and dust, and more. 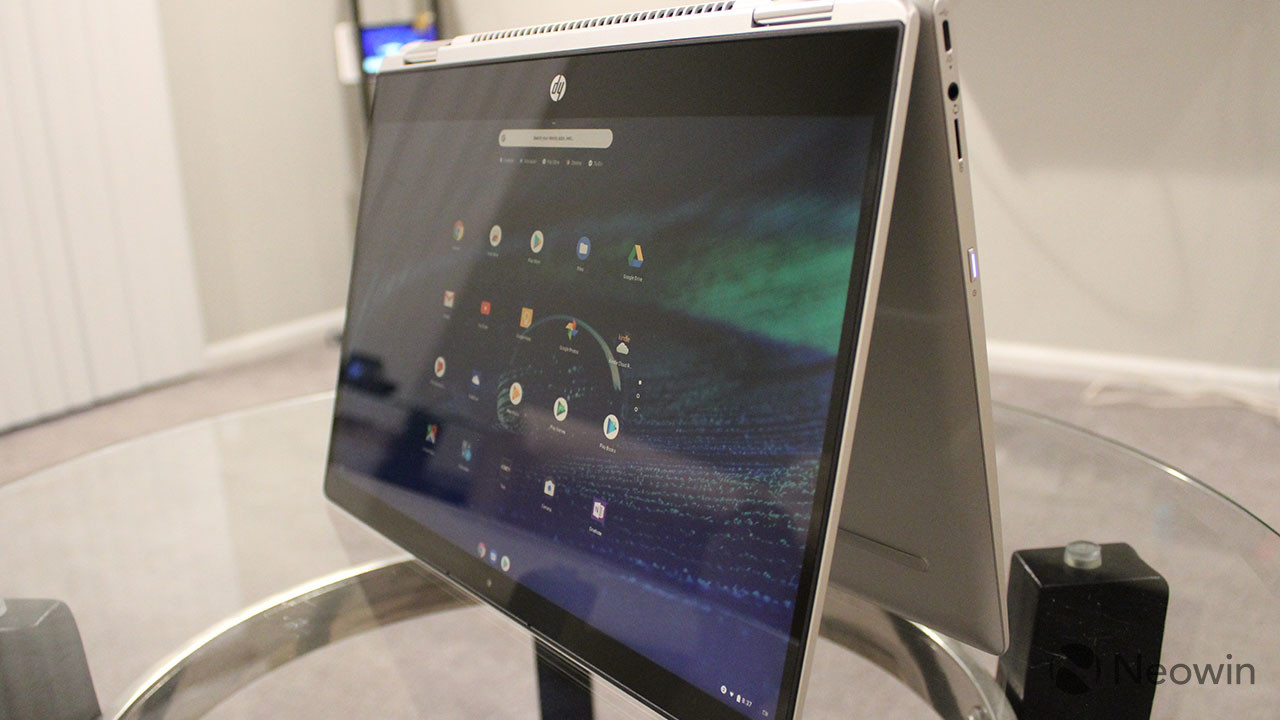 Naturally, the x360 design lets you use it in other form factors. Most of the time, you'll probably be using it as a standard laptop, but you can also prop it up in tent mode and watch a movie, or you can fold the display all the way back and use it as a tablet.

Using it as a tablet comes naturally to Chrome OS, since it has Android app support. Obviously, these apps were designed with touch in mind.

The HP Chromebook x360 14 G1 has a 14-inch 1080p touchscreen. The screen looks great, even if it is a little bit glossy. It does get pretty bright though, so the glossiness shouldn't get in the way of outdoor use. 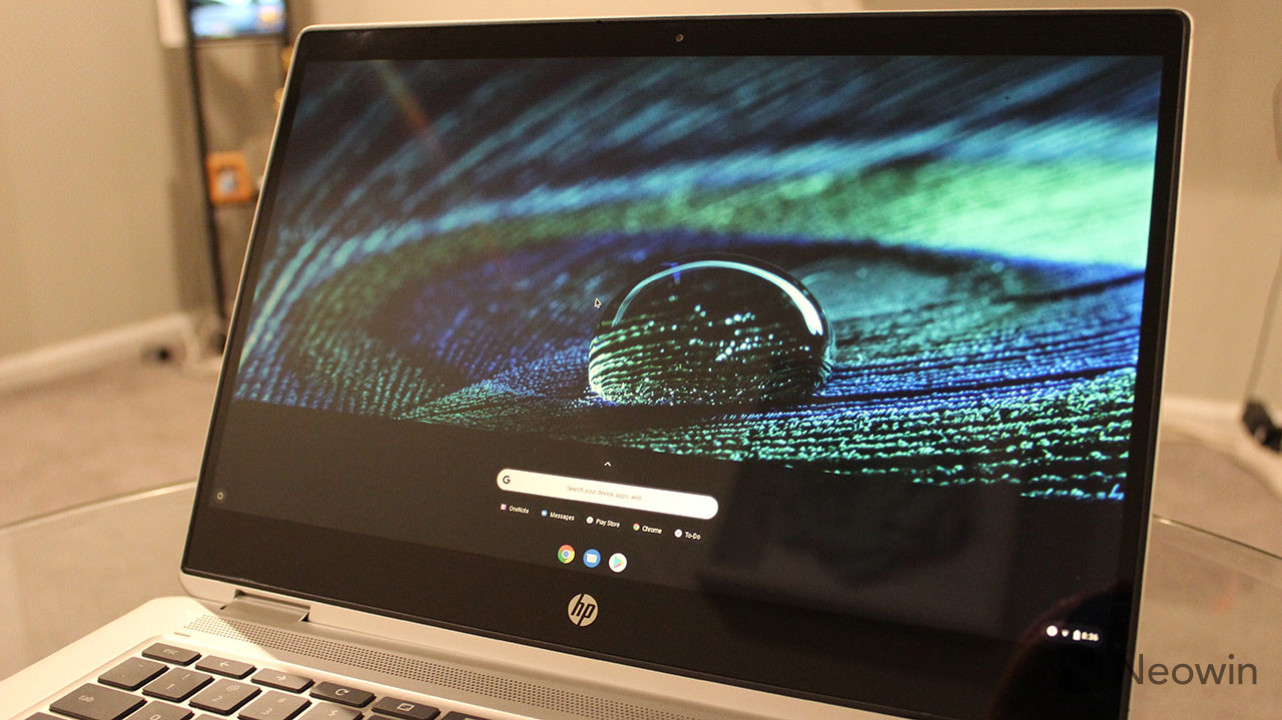 As can often be the case for HP laptops, it has narrow side bezels and large top and bottom bezels. The side bezels come in at 7.5mm, while the top bezel fits the webcam and comes in at over double the size. The chin is the largest bezel, and all it's used for is the HP logo. I'm not completely against a large bottom bezel though, since it can prop up the display. 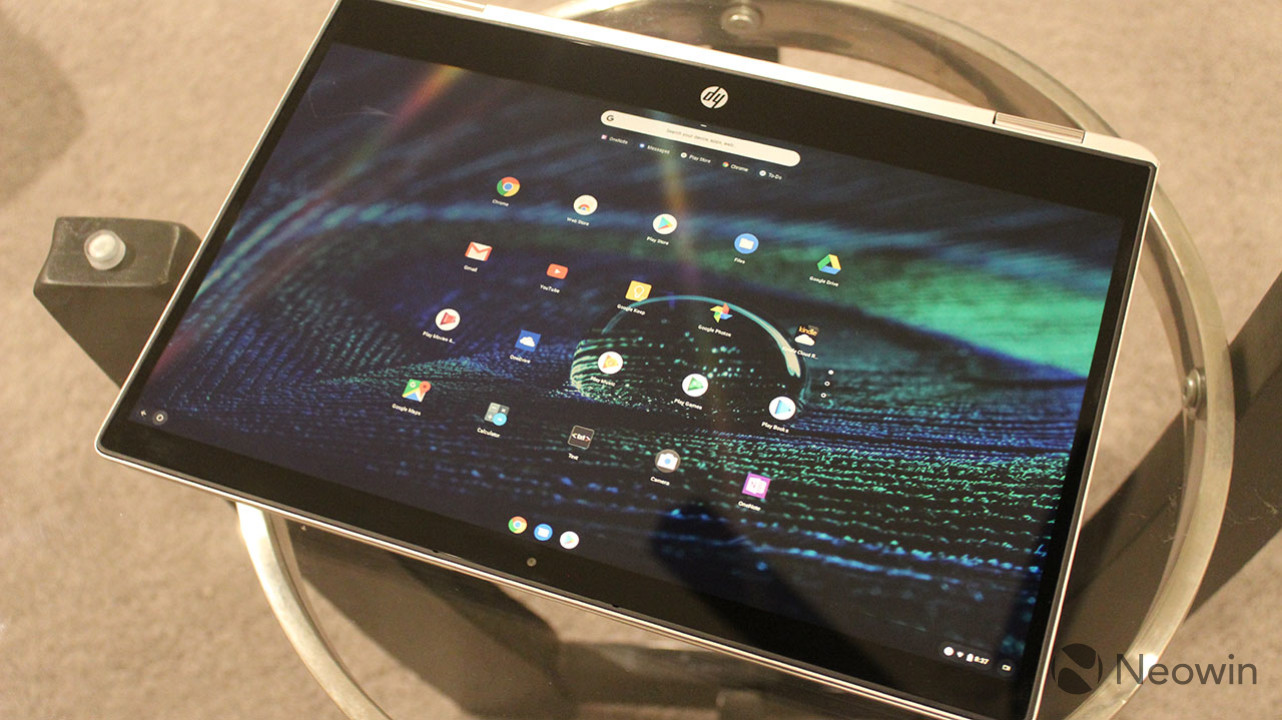 The biggest downside to the display is the lack of pen support. This is really just something that doesn't make any sense to me. Every major Windows 10 convertible has pen support these days, and even Apple now has pen support in its entire range of iPads. Android apps are made for touch, and that's a good thing, but be sure that you won't be craving pen usage.

There's also no Sure View option. Sure View is HP's privacy display, which started off in its business devices and made its way to the consumer lineup. Basically, it keeps people looking over your shoulder from seeing what you're up to. Company reps have often said that there are two kinds of people: those that need Sure View and those that don't know they need Sure View. Since it's been a staple of HP's business laptops for some time now. I have no idea why it's not in this one.

The Chromebook x360 14 G1 has a good keyboard, not a great one. Once again, I'm drawing the parallel to the EliteBook series, which seems to be aimed at the same business customers as this PC.

Let's be clear about something. The Premium Collaboration Keyboard on the HP EliteBook x360 1040 G5 is one of the best keyboards on the market. It's quiet, accurate, and comfortable. HP decided to leave this out on the Chromebook x360, presumably to hit the price point that it wanted to. Just based on the logo used, this clearly isn't meant to be a premium PC and is aimed at the mainstream. Still, I have to wonder if the team that built it worked with the team that builds the rest of HP's commercial portfolio. 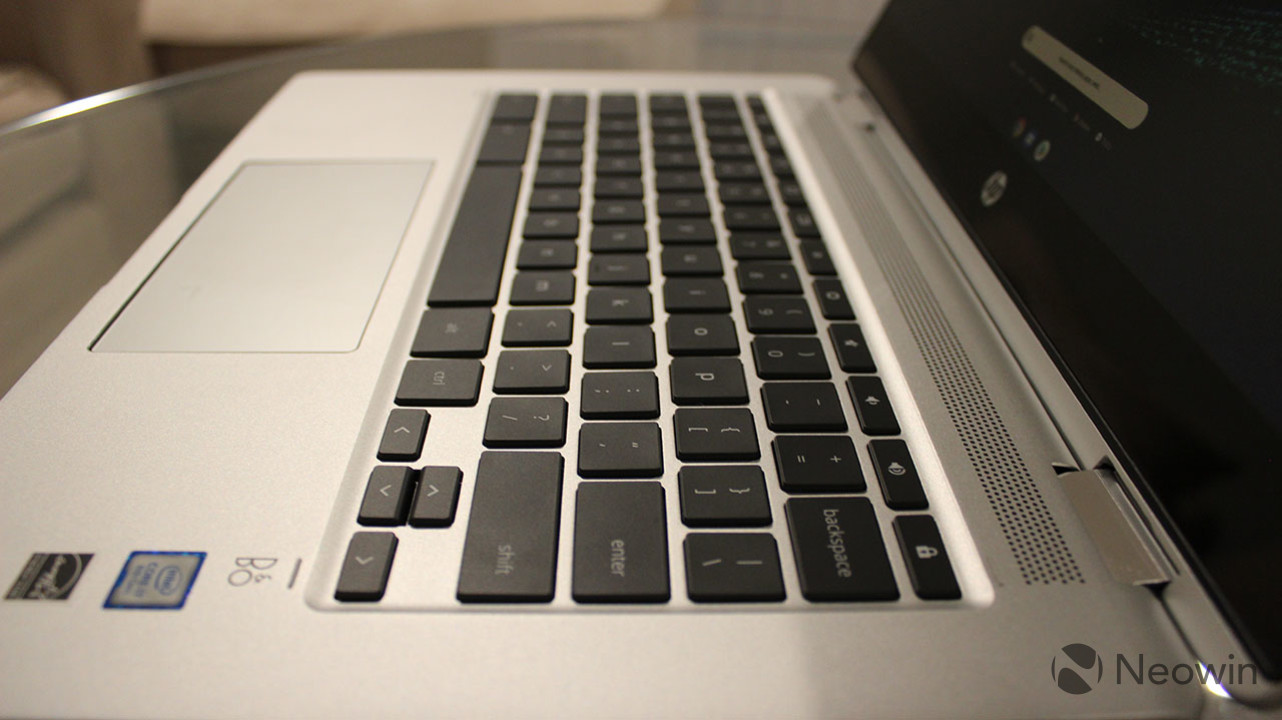 But again, the keyboard is pretty good. If HP didn't make such a wonderful keyboard on another device, I'd have nothing bad to say at all. It's accurate, and as far as comfort goes, it's pretty standard. It's quieter than the Chromebook 14 that I reviewed a couple of weeks ago, which is really nice.

The keys have the same lowercase styling that you'll see on all Chromebooks, and as usual, there's a different layout from Windows 10 PCs. Obviously, there's no Windows key. There's also no Caps Lock key, which is instead replaced by a search key. To turn Caps Lock on, you'll have to hit alt-search. There are also no F-keys like we've had on other operating systems for decades. Chrome OS is a modern operating system, which had a chance to start at the beginning, not including legacy features. It makes sense not to have F-keys.

Below the keyboard is a clickable glass trackpad, which is large enough. It's also comfortable and accurate, and I've got no complaints at all in that department. 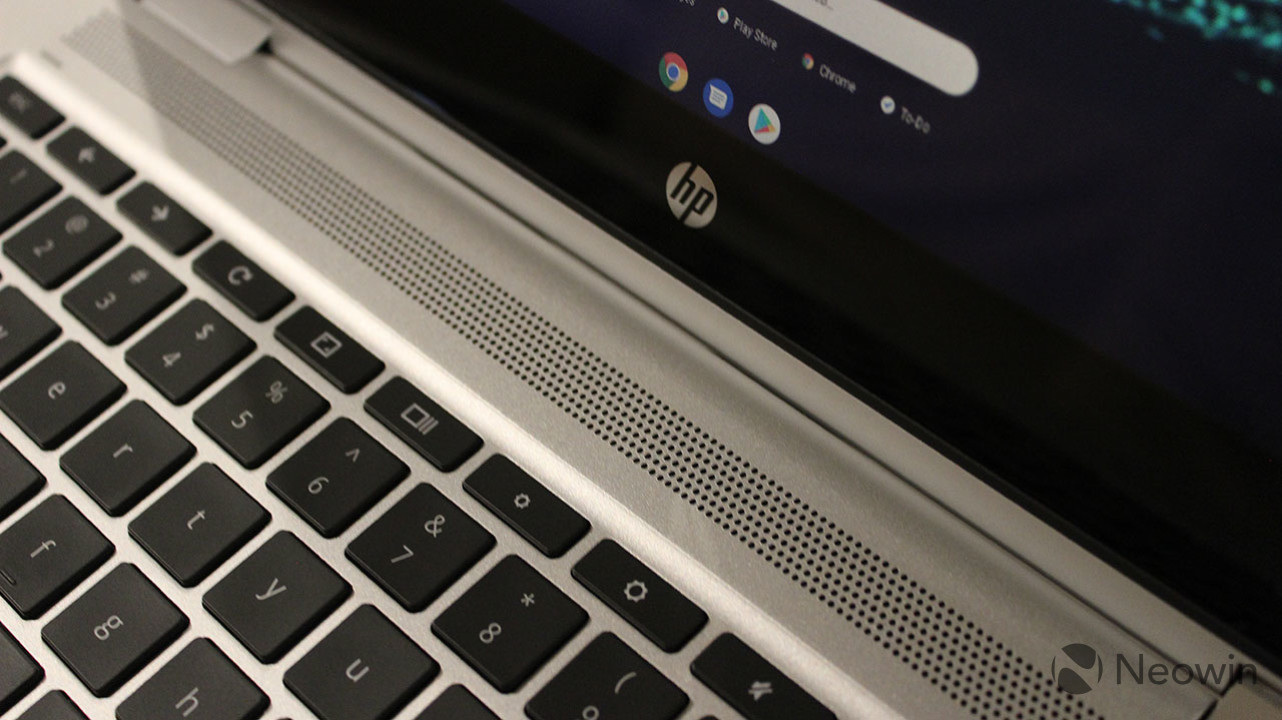 Above the keyboard is a speaker grille, which pumps out some quality Bang & Olufsen sound. HP's partnership with B&O has been great for the audio quality experience, putting solid sound in devices of all price points.

When I reviewed the HP Chromebook 14 - a clamshell with much lower-end parts - I noted that it struggled with multitasking, and that the x360 would be much better (HP sent me both at the same time). It is. The Chromebook x360 14 G1 that the company sent me includes a Core i7-8650U CPU and 16GB RAM, which is more than enough on Windows 10, let alone a lightweight OS like Chrome OS.

There are some parts of Chrome OS that are not lightweight though, and I'm talking about Android apps. Android apps can be a bit clunky, but you definitely get a better experience with this kind of hardware. With the Chromebook 14, I was forced to use web apps for things like Skype, Slack, and OneNote. 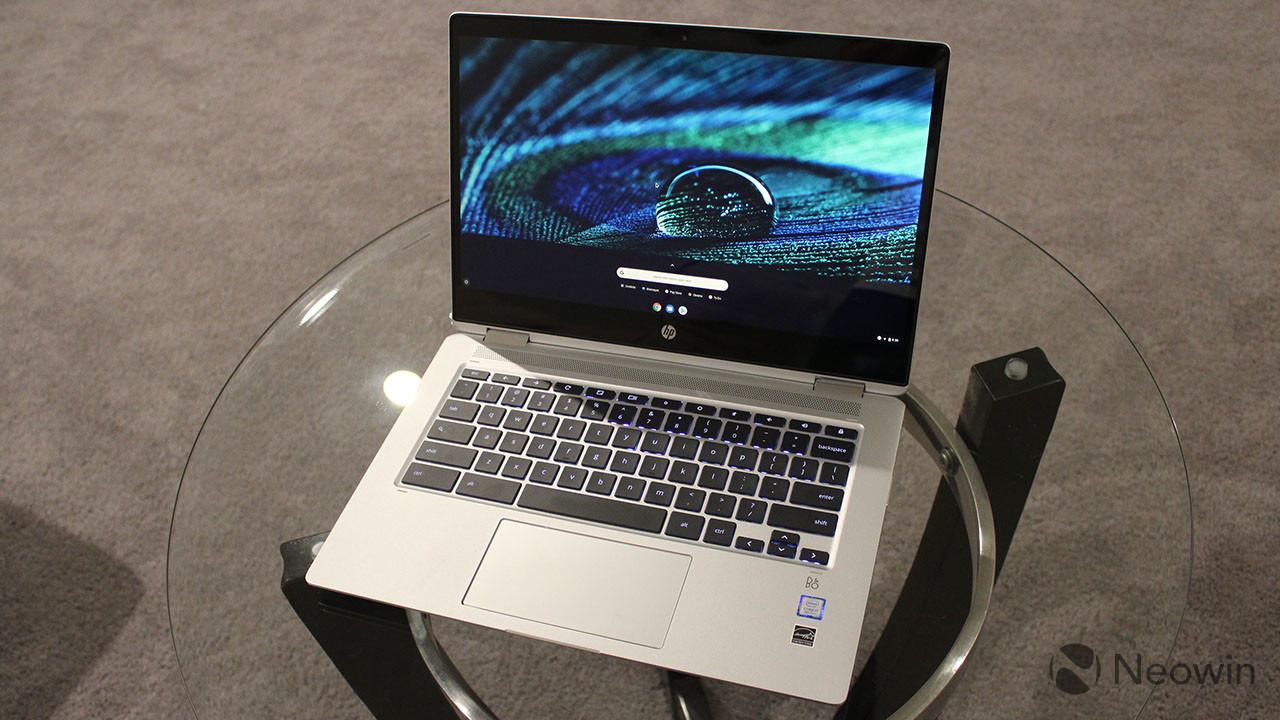 With this machine, it was easy to use Chrome along with multiple Android apps, without wasting tons of time waiting for things to load.

The Core i7-8650U is a 15W vPro chip, the same that you'd expect to find in any high-end business laptop or convertible. The U-series is the standard for that, and vPro adds various security features. It's from the Kaby Lake R family, which is the first of the two iterations of eighth-generation chips that Intel made. Yes, it's confusing.

The base model, which is considerably less expensive, comes with an Intel Pentium 4415U, which has two cores and four threads - half of the Core i7 model -, along with 8GB RAM. You'll probably want to bump up the specs to at least a Core i5-8350U if you buy this PC.

The battery life from the 60.9Wh battery is actually quite good. I was able to get between 10 and 12 hours out of it. What's also cool is that it doesn't use much power when it's on standby, and it doesn't seem to use any when it's powered down. Oddly, I've had issues with HP laptops where they drain power when they're not on.

It also wakes up pretty much instantly, a nice feature of Chrome OS. It boots fast, and it wakes fast. Updates occasionally require a restart, but even then, you're back up and running in seconds.

The HP Chromebook x360 14 G1 is an excellent, yet flawed, Chrome OS convertible. On one hand, it's one of the best Chromebooks I've used, simply because it has a Core i7 and 16GB RAM, along with a nice display and keyboard. 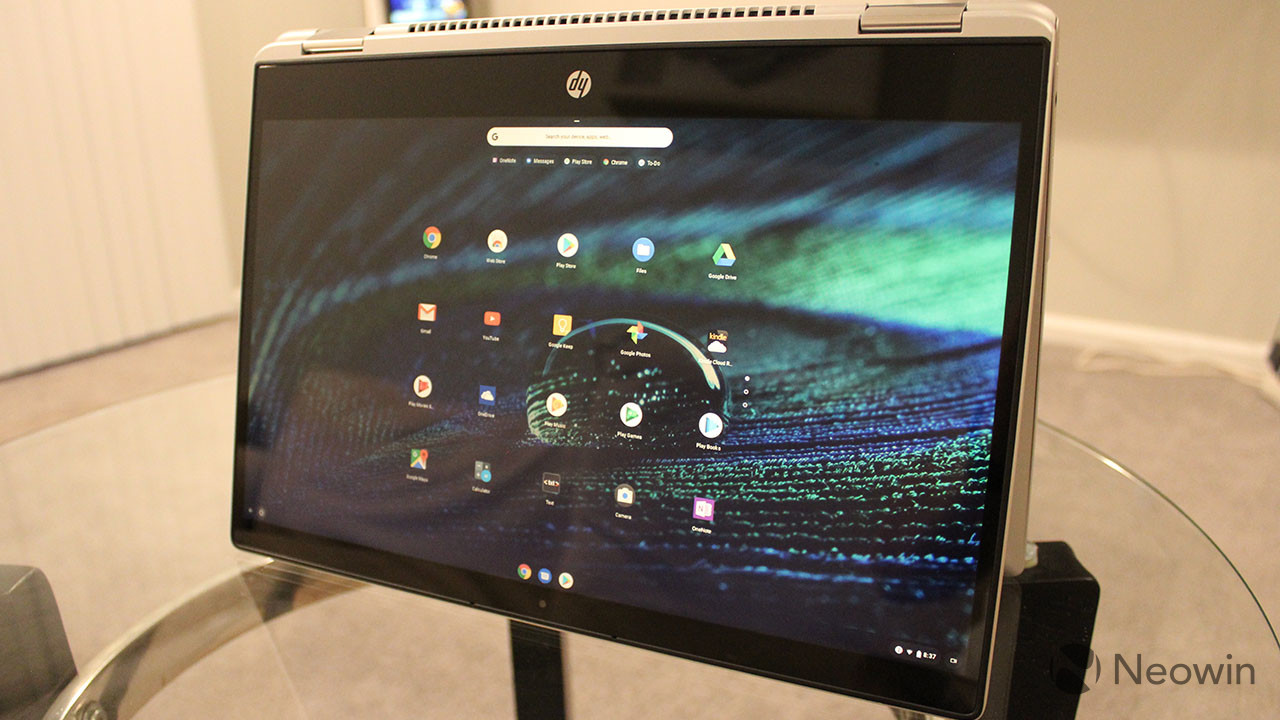 On the other hand, it's missing some core features that I've come to expect from HP. There's no Sure View option, which is really strange for a business PC from the firm. And as I've talked about multiple times throughout this review, there's no pen support. I'd also like to have seen the Premium Collaboration Keyboard, and maybe even an option for 4G LTE. These are all key business features.

The biggest issue is that HP has set such a high bar for itself. I wouldn't complain about a lack of Sure View from Dell, because Dell doesn't have Sure View. But HP's Windows 10 commercial PCs are really good, and it just seems like the Chromebook guys didn't talk to the Elite guys here. Honestly, I don't know why HP didn't just take one of its EliteBook convertibles and install Chrome OS on it.

At $1,250, the Chromebook x360 14 G1 is definitely a great product. The key is that you have to want Chrome OS. If you're buying new laptops for your business and can go either way between Windows 10 or Chrome OS, an EliteBook from the 800 series is still better hardware, let alone the 1000 series. 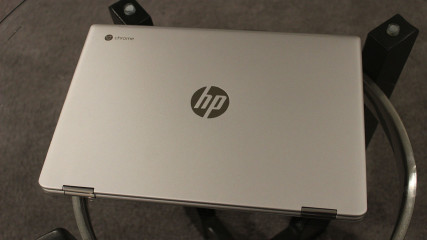 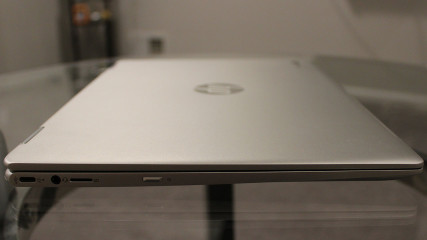 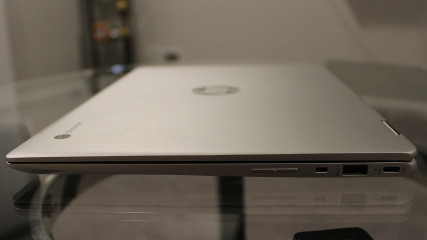 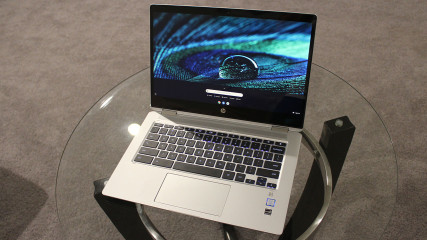 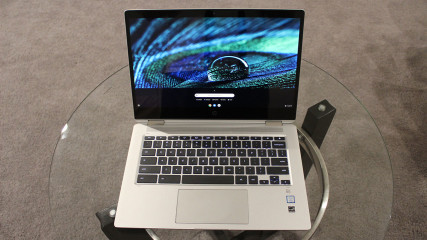 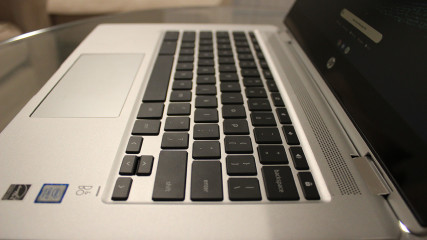 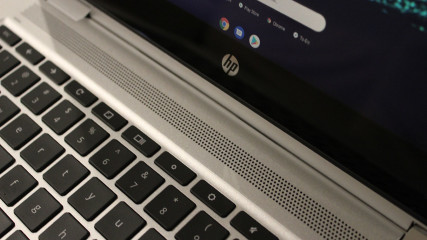 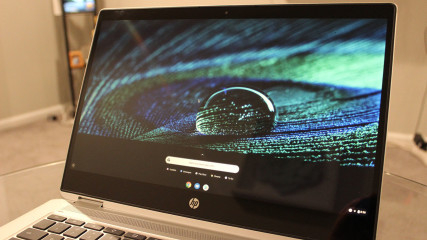 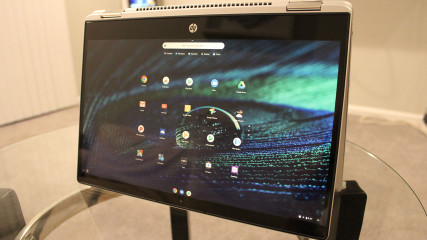 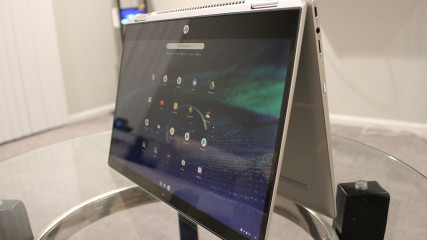 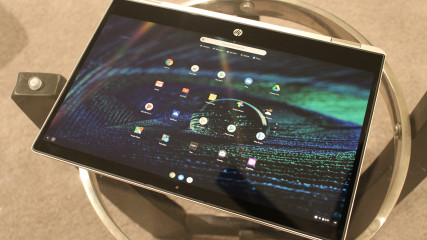