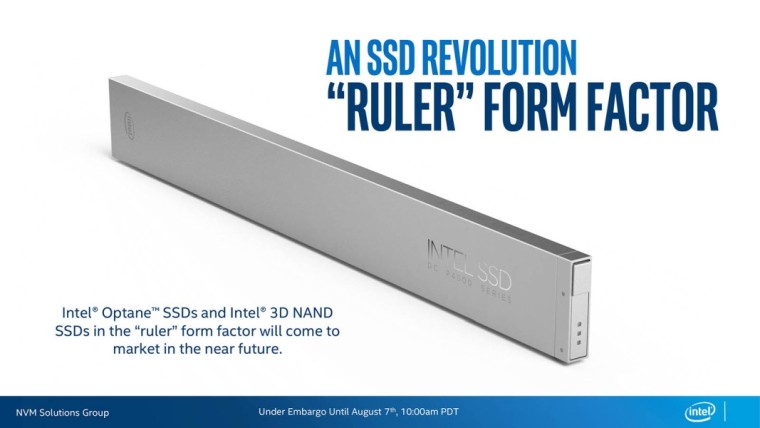 Lately, Intel seems to be pushing the envelope with new form factors of computing products. Last year, the semiconductor giant launched the second iteration of its Compute Sticks, single-board computers designed to be used in media center applications or other limited space situations. The firm is also gearing up for the release of the Compute Card, a credit card-sized computer that will fit in your wallet.

The company did not stop at computers though, as it tries to bring that same level of innovation into its storage business. As part of the company’s new non-volatile Optane memory system rollout, Intel first released its enterprise PCIe implementation for servers and a few days later, the firm unveiled its consumer-focused Optane Memory module. Now, the company has teased its new long and skinny ‘ruler’ form factor SSDs that aspires to revolutionize enterprise storage.

The new form factor focuses on achieving high storage density that needs as little power and cooling as possible. Intel says that the new ruler SSDs are intended for use in super high-density storage racks, with up to 1PB in a single 1U server. To put that in perspective, in order to achieve the same amount of storage with 10TB mechanical hard drives, a fully loaded, 100-bay 4U server is required.

As this reveal is just a tease, Intel did not reveal any other information about the product, such as dimensions or connectors, but the company says that it is planning to bring to market SSDs that utilize the new ruler form factor in the near future.