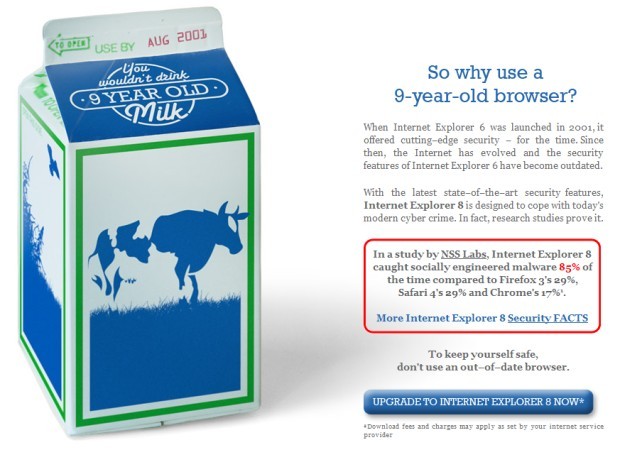 The Windows Team Blog points us to a report browser usage showing that Internet Explorer 8 usage is on the rise throughout the world.

With all versions of Internet Explorer accounted for, Microsoft's share of users actually dropped from last month by .34% but usage of Internet Explorer 8 climbed 1.17% to account for 32.04% of the whole IE share of 60.4%. Chrome's share grew by 0.36% to 7.52% from last month and Firefox had a slight gain of 0.02% to 22.93% worldwide. This is a nice change for Firefox as they have been slowing losing market share for the past few months. In January of this year Firefox had 24.43% of the market.

The study reported that, "Internet Explorer 6 share declined 0.87% to 16.99%.  Share of the nearly decade-old Internet Explorer 6 fell below 5% in Europe and is nearing 5% in many developed markets such as U.S., UK and France.  The major holdout for IE6 is China with over 46% share (50.5% if you include editions), which is significantly skewing global share."

Microsoft says that those still using Internet Explorer 6 are, "concentrated in developing or emerging markets as well as enterprises with substantial application dependencies that take time to migrate." With IE9 on the way Microsoft is doing all it can to move users away from IE6, the browser they liken to spoiled milk.

The beta for IE9 is expected to be released in a couple of weeks, but while you wait Microsoft has offered the IE Test Drive Site where you can see some of the features you have to look forward to in IE9. Internet Explorer Platform Preview requires Windows Vista or Windows 7.