Just over a year ago, shortly before iOS 9 was released, iOS 8 had reached 87% of Apple's mobile devices. Now, iOS 9 has peaked, as the company begins rolling out the very latest version of the operating system.

Within just three days of its release last September, iOS 9 had already made its way to 50% of Apple's i-devices - an incredible achievement, whichever way you look at it. The install rate slowed considerably after that, of course, rising to a still-impressive 75% four months after its launch.

Today, Apple released iOS 10 for many - but not all - of its devices, and with that rollout now underway, iOS 9 installations will inevitably decrease as users upgrade to the new version. 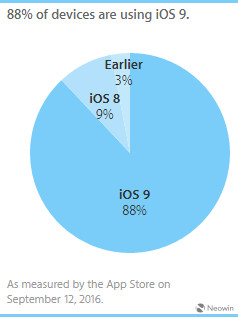 According to the Apple Developer site, as of yesterday, 88% of iOS devices were running version 9.x, while the proportion of iOS 8 devices had fallen to just 9%. Around 3% of active devices were using earlier versions of the OS.

That stands in stark contrast to Android, highlighting the differences between how the two companies manage updates on their respective platforms. The newest version, 7.0 Nougat, started its rollout last month, but the previous version - Android 6.0 Marshmallow, which was released eleven months ago - has so far reached just 18.7% of active devices, according to data that Google published today.

Meanwhile, today's iOS 10 rollout hasn't gone entirely smoothly so far; within hours of it beginning, the company found itself apologizing to its customers. Apple admitted that there had been a "brief issue with the software update process" after many users complained that their devices had been 'bricked' when trying to install it.