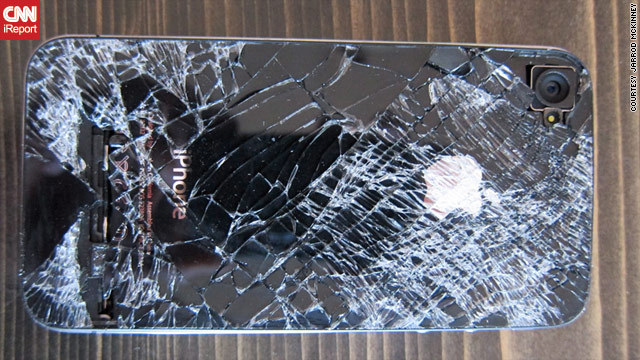 Some people just can't live without their iPhone 4. That apparently includes a skydiver who decided to keep his Apple smartphone with him when he took a recent plunge from a perfectly good airplane. However, his iPhone 4 dropped out of his pocket while he was dropping down from over 13,000 feet. Surprisingly, as CNN reports, the battered and beaten phone emerged from the huge fall with the ability to still make phone calls.

37 year old Jarrod McKinney of Minnesota said that he's not sure exactly when his iPhone 4 got out of his pockets during his skydive, saying that in the rush to get out of the airplane he forgot to zip up the pockets on his skydiving pants. If you are wondering why he decided to skydive with his iPhone in the first place, he stated that he liked to have the phone around if his jump destination doesn't go as planned and he has to phone someone to find him and pick him up.

Luckily, McKinney managed to locate his iPhone 4 via a GPS tracking app after he safely landed himself to the ground via parachute. The iPhone had made its impact about a half mile away from where McKinney landed on top of a building. As you can see from the above picture, the phone won't be able to play Angry Birds or use any other apps. The report states that when McKinney's skydiving instructor Joe Johnson decided to call the phone on a whim, the call went through and McKinney answered.