Kirby may not be Nintendo’s most popular video game franchise, but the pink blob has been around since 1992 – longer than other franchises such as Pokémon. The reason these games go under the radar for a lot of folks might have to do with their colorful, somewhat childish appeal.

Even so, the series lives on and it has received a high number of new entries in the past few years, mostly on the Nintendo 3DS. In 2018, the Nintendo Switch is seeing its first release from the franchise with Kirby Star Allies.

The first thing to note about this game is that you shouldn’t come into it expecting a significant challenge. Part of the “childish” appeal I mentioned above comes from the accessible mechanics and stages. This is a series of games to help you wind down and relax, to get through and enjoy at your own pace. Star Allies fits perfectly in that spirit, and it may be one of the best in the series in that regard, save for one big drawback I’ll get to later. 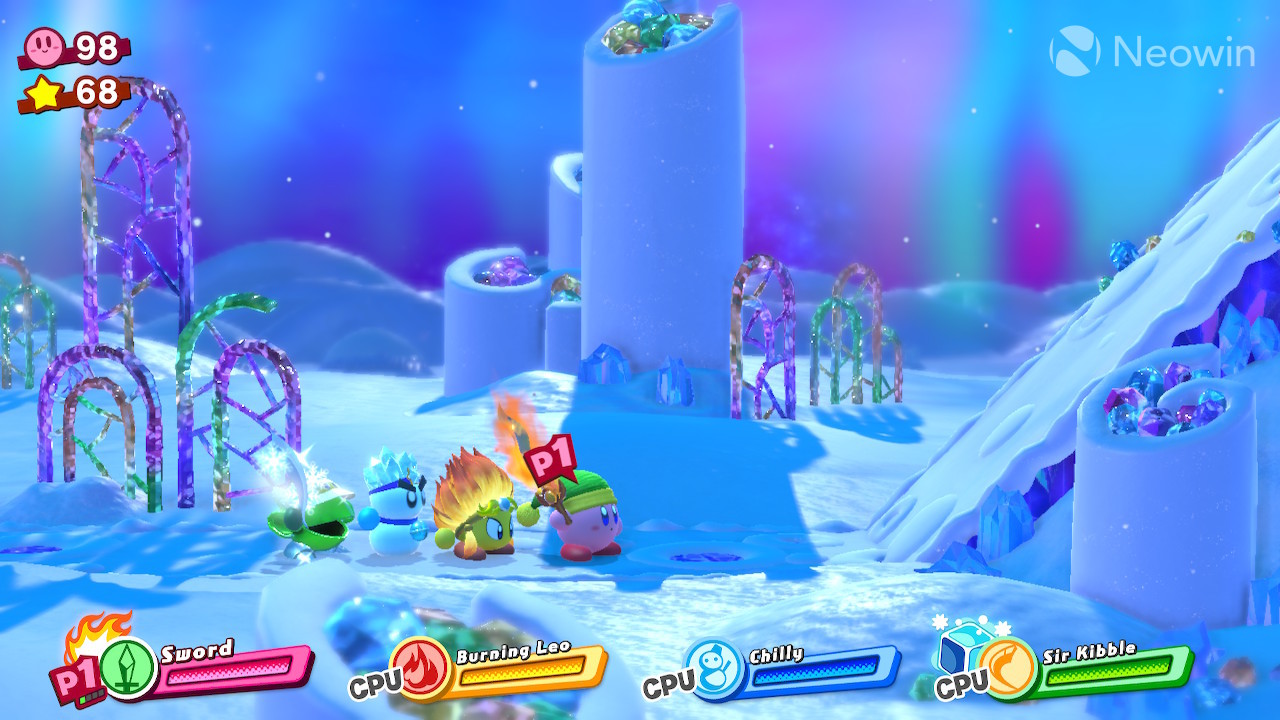 It all starts with the beautiful HD graphics provided by the Switch’s hardware. This may seem like a moot point at a time where consoles are hitting 4K resolution at 60 frames per second, but this is the first time we see a Kirby game rendered in HD - if we assume that the clay-looking Kirby and the Rainbow Curse on the Wii U doesn’t count.

The looks don’t justify the fact that this is one of the few Kirby games that run at just 30 frames per second, but Star Allies isn’t a tremendously fast-paced game to the point where this is a big deal, and it does look very nice.

Art isn’t all about visuals, and the soundtrack in this game contributes to an environment that feels well thought out. It’s not mind-blowing by any means, but the music almost always seems to perfectly fit the stage you’re playing, and it adds to the beauty of the game.

The game heavily focuses on the multiplayer experience, and up to four players can cooperate through the game. Additional players will control characters which embody the copy abilities which Kirby typically absorbs, but Star Allies also introduces Dream Friends, special characters – such as King Dedede – who can fight alongside Kirby. Dream Friends can have both all-new items but also add special twists to existing items, like Dedede’s hammer or Meta Knight’s sword. 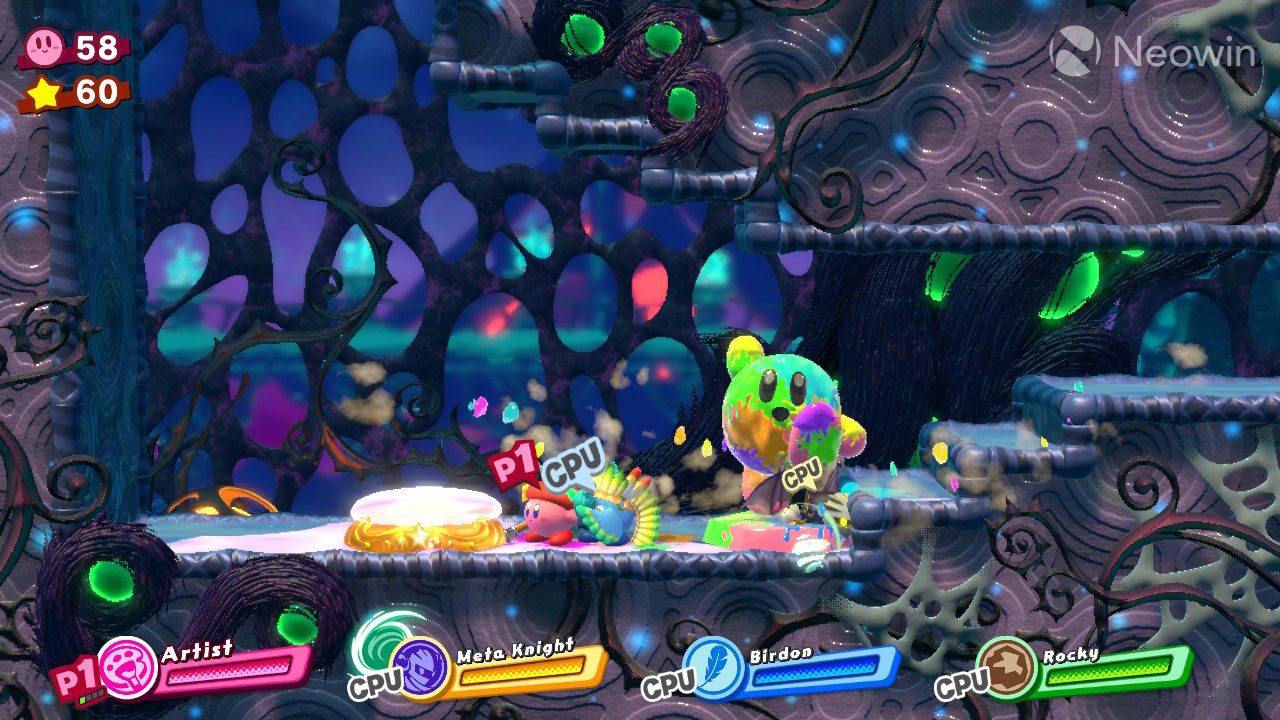 Not only does the game introduce these new characters, but it also introduces a new mechanic which allows the players to combine copy abilities, adding ice or fire elements to weapons such as the sword or even the yo-yo. The amount of different combinations this allows is huge, and it’s a fantastic incentive to explore all that can be done in the game. Some combinations are predictable, others are a bit more surprising, and it’s incredibly fun to discover them by accident or on purpose.

This introduces one of the shortcomings of the game, however. The game’s heavy focus on multiplayer means that if you have no one to play with, the additional characters will be controlled by AI. This would be acceptable, but the cooperation required by the game to combine different abilities and elements just doesn’t work with AI.

The AI-controlled friends are terrible at figuring out what you want them to do, and the game provides no mechanism to allow players to control what the non-human players do. This can make the experience genuinely frustrating at times, as players will see themselves forced to choose very specific characters to give the AI allies less room for mistakes, which, once again, limits the freedom to try new things in a game that’s all about exploring the different abilities and combinations.

And Dream Friends themselves leave a bit to be desired. I played the game a while after the initial release, and an update had already been pushed to introduce more Dream Friends, but even then there were only six to choose from. The original release of the game had just three Dream Friends available. For a game that encourages trying things out, this feels somewhat limiting. Nintendo does plan to introduce more with future updates, but it feels like it may be too late now that I've already beaten the game.

The story of Star Allies is as basic as any previous Kirby game has been. An outer space threat attacks Dream Land, corrupting some of its inhabitants in the process. Most notably, King Dedede, who has typically been a boss towards the end of previous Kirby games. Star Allies puts a bit of a spin on the old formula by making Dedede (“His Royal Nemesis”) the boss at the end of the very first world, which helps create some curiosity as to who the player might face off against later in the game.

As mentioned previously, the story mode in Star Allies is far from challenging – even with the poor CPU-controlled allies - which is something to be expected from Kirby games, but I was a little disappointed to find out that boss fights are made easier every time you get defeated in one. The game refers to this as the enemies getting “tired”, and there’s no way to disable this in the settings. 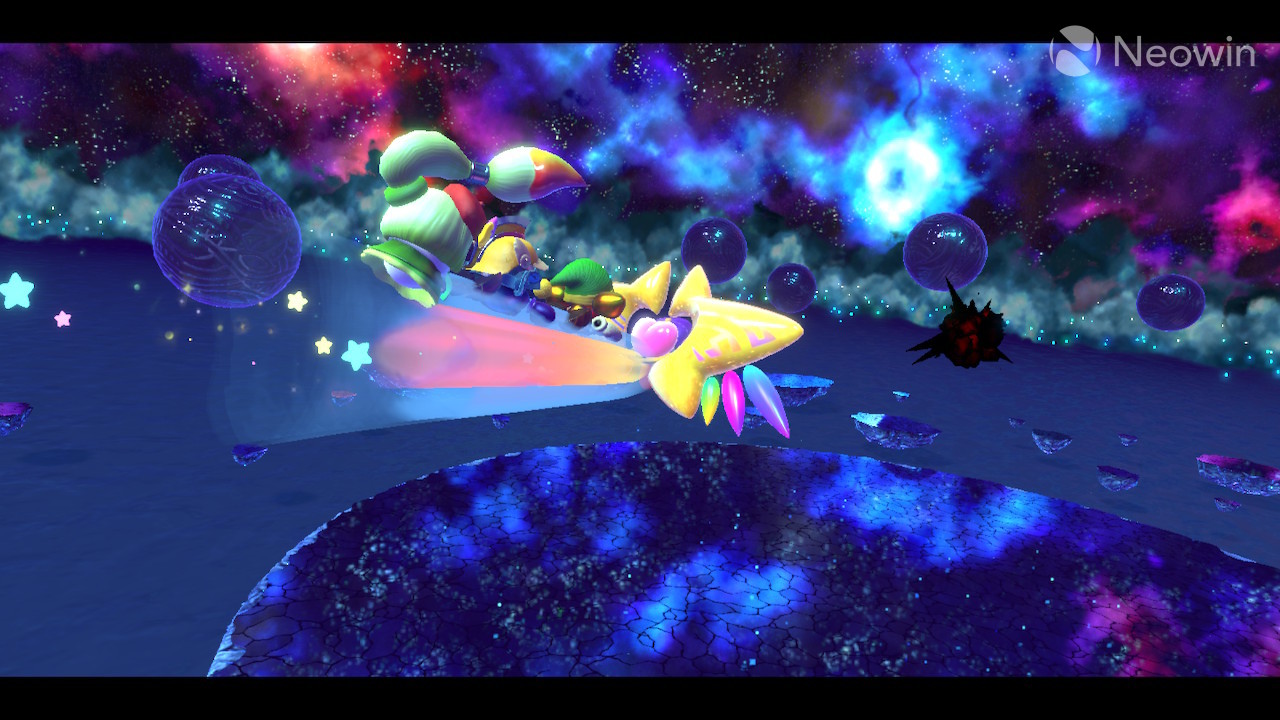 While it’s not particularly challenging for most of the time, the game does hit a high note with the last boss fight. Probably helped by the unprecedented graphics power of the Nintendo Switch (for a Kirby game, that is), this is the first time in my experience where I’m taken to a fully 3D environment to fight an enemy. The sheer size of the enemy and the environment make for a battle that, while not particularly hard, does feel somewhat grand.

Beat the story mode and you’ll find that the game is far from over. In addition to a couple of extra stages added to the story mode after the last boss, two new game modes are unlocked: Guest Star ???? Star Allies Go! and The Ultimate Choice, both of which offer slight twists on the core experience.

In Guest Star ???? Star Allies Go!, players control any of the allies from the main game. Kirby itself is not present in this game mode, making room for the embodiment of all the copy abilities. Dream Friends are also available to choose from, but only after you’ve cleared the challenges with a regular copy ability.

This is a sort of time attack mode mostly based on the content from the main game which is adapted to fit a more continuous layout, meaning each world from the main game – aside from the last one – turns into a single stage. There are also slightly different challenges, with reworked puzzle sections and a bigger focus on fights, with stage progression often stopping to send out a series of enemies for the player to defeat.

There are also light RPG elements in this mode, with speed, attack, and health power-ups hidden throughout the stages to make progression easier. This is especially helpful during boss fights, as regular enemies are usually very easy to kill. Speaking of bosses, there’s an all-new one in this mode which you don’t find when playing through the story mode. 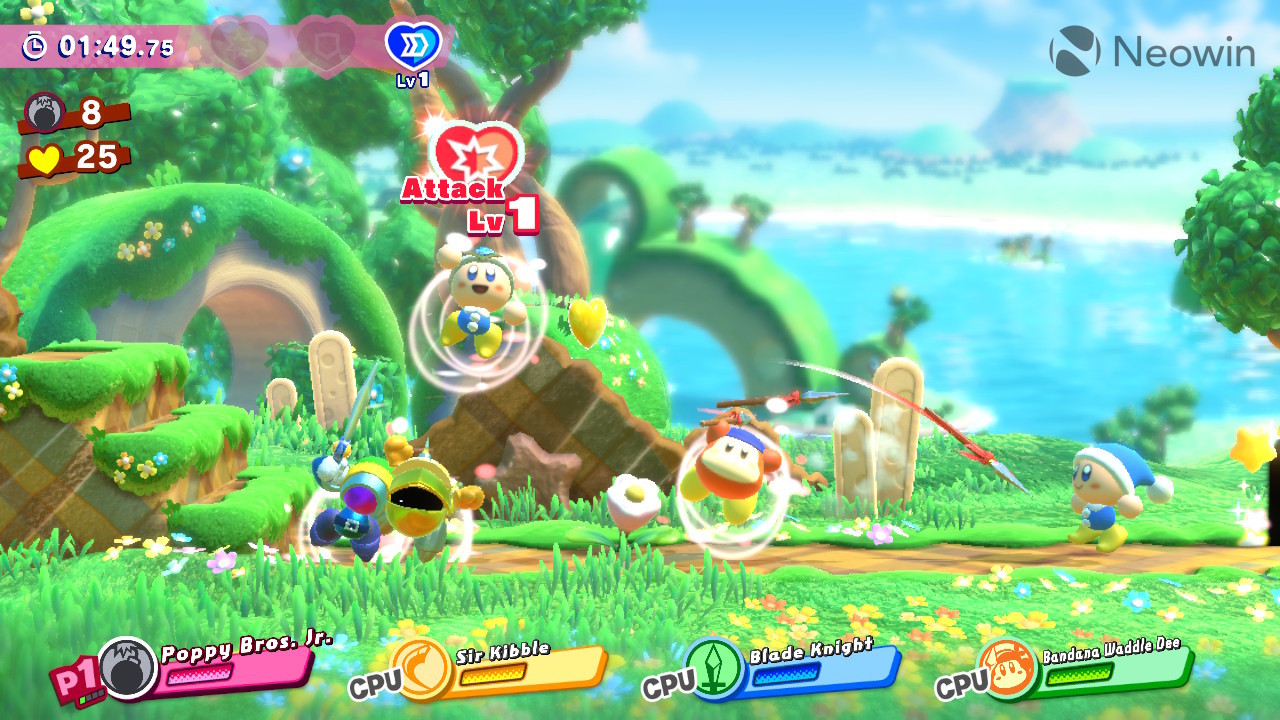 Despite keeping track of the time it takes the player to beat each stage, the game doesn’t provide any sort of way to compare results with others, which makes it somewhat superfluous to aim for the fastest times.

A similar issue affects the other post-story game mode, The Ultimate Choice. Here, the game doesn’t track the time so much as it scores the player’s performance. The top three scores are stored locally in the game, but there’s once again no sort of leaderboard to speak of.

The Ultimate Choice is a “boss rush” mode, where the player must face a series of back-to-back boss fights based on the main story mode. There’s a total of eight difficulty levels (though the last one is initially hidden), which increasingly add more bosses to face, provide less effective healing items in the break room, and – at the very top of the scale – introduce another all-new boss fight.

While other game modes allow the player(s) to change up members of the team by acquiring new copy abilities from enemies, The Ultimate Choice forces the team to be set from the very beginning, with the only possible changes coming from combining the existing copy abilities. The only room for change is if one player chooses to play as regular Kirby, which can absorb copy abilities from some of the mini-bosses found during the challenge. However, these don’t provide a lot of options for transformation. 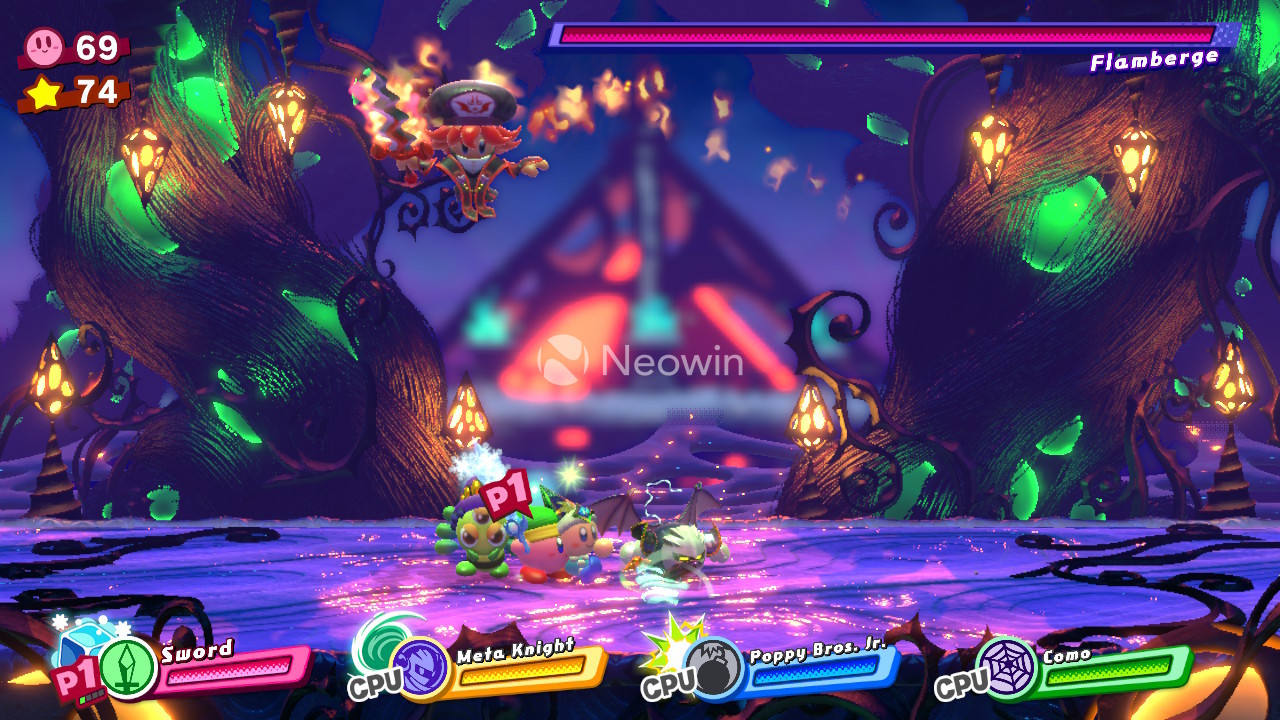 As mentioned earlier, one shouldn’t come into a Kirby game expecting a tremendous challenge, but The Ultimate Choice is the exception to the rule. The highest difficulty setting is a serious challenge, made all the harder by the poor CPU-controlled allies. I found myself having to try again dozens of times to make it to the end. In this mode, the fights don’t get easier every time the player is defeated, and losing in any of the battles forces you to start from the beginning of the streak.

As you play through all these game modes, you’ll collect puzzle pieces that make up celebration pictures. These are simply illustrations of characters from the franchise, and puzzle pieces are required to access them. It’s a nice bonus for fans, but it feels like a lackluster incentive to play through the game time and time again.

As a bit of a footnote, the game also includes two competitive mini-games which can be played with up to four people on the same console. In one of them, players compete using a baseball bat to send a meteor to outer space and see which one gets further. In the other, the competitors must cut down a tree as fast as possible while avoiding enemies. Both are very simple, but each one has three different difficulty levels to add some complexity for more experienced players.

Whether or not you should play this game is highly dependent on whether you’re playing it alone or with friends. The game has a great art direction and it is very enticing to try out all the combinations of abilities as you go through every stage but dealing with AI-controlled friends makes a major dent on that experience. On the other hand, playing through all the content with friends, discovering all the possible combinations of abilities, and coming up with different strategies accordingly can be both joyful and challenging. Your decision should consider how you’re planning to play the game.

For the purpose of this review, the game was acquired in physical format through Portuguese retailer Worten. You can buy a digital copy from the Nintendo eShop for $59.99, or get it from Amazon where it is currently available for $54.99.