At Mobile World Congress this year, Lenovo announced its new ThinkPad X-series. This year's ThinkPad X390 replaces last year's X280, so there's no more 12-inch model. By shrinking down the bezels by 50%, Lenovo was able to fit a bigger screen into a similarly-sized footprint.

Not only that, but the larger model is still 12% thinner and 5% lighter than its 12-inch predecessor. There's also an IR camera for Windows Hello with Lenovo's ThinkShutter privacy guard, all of the ports you need, a Core i7, 16GB RAM, and more.

Read on for our review:

Part of me wants to call the ThinkPad X390 a smaller version of the ThinkPad X1 Carbon, but it's not quite as light and it's not made out of carbon fiber. It's still really light though at just 2.84 pounds, and with its small footprint, it's very portable.

It comes in any color you want, as long as it's black, and the top is made out of PPS while the base is made out of magnesium and aluminum. The materials certainly give it a solid feel, and like all ThinkPads, it's MIL-STD-810G certified against 12 different test, checking conditions like vibration, humidity, extreme temperatures, sand, high altitude, shock, and more. 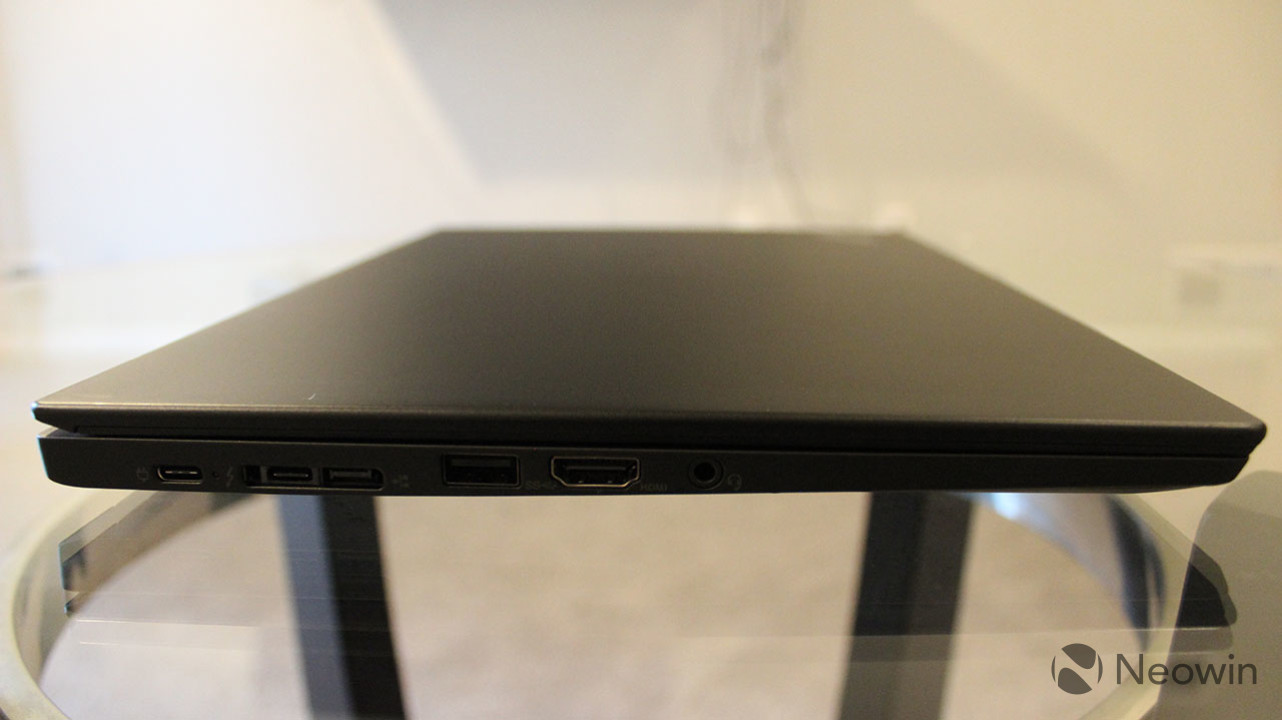 As far as ports go, the ThinkPad X390 has just about everything that you need. On the left side, there's a USB Type-C port that's for power, and there's another one for Thunderbolt 3 and mechanical docking. There's also a USB 3.1 Gen 1 port, HDMI 1.4, and a 3.5mm combo audio jack. 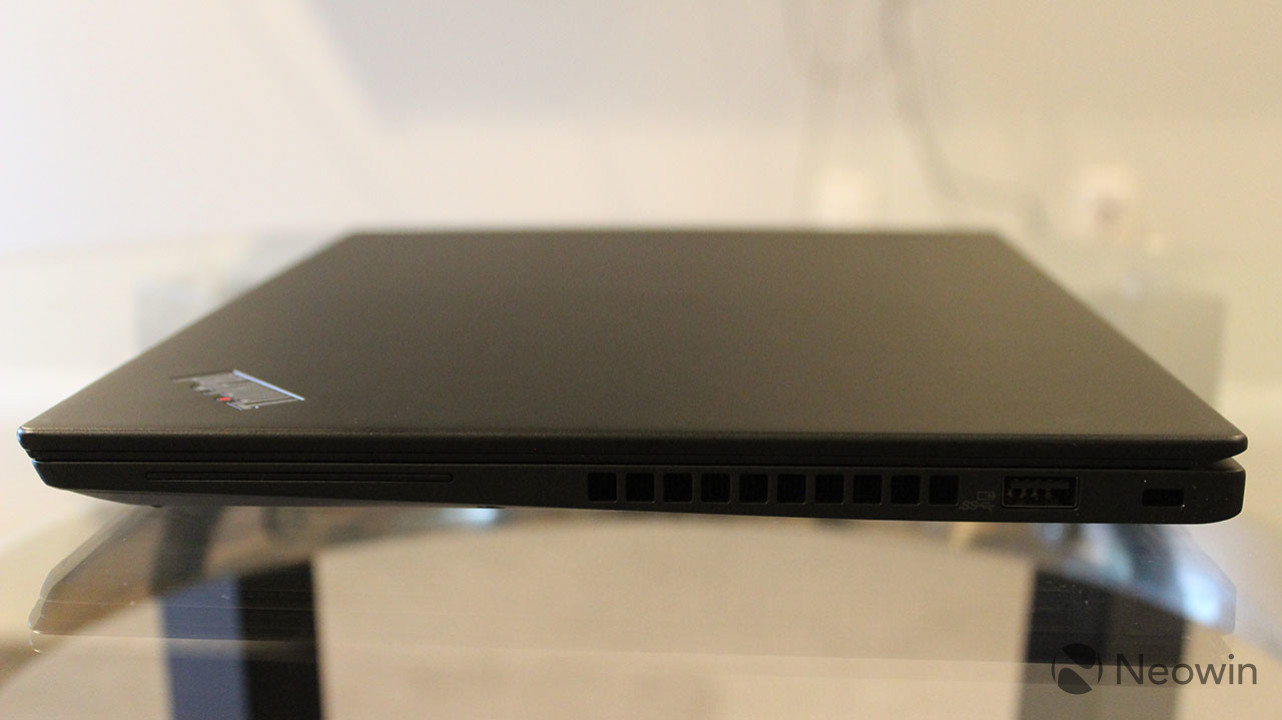 On the right, there's another USB 3.1 Gen 1 Type-A port and an optional Smart Card reader. Finally, on the back, there's a tray for a microSD card and a nano-SIM. If you didn't get a cellular model (and Lenovo did not send us the cellular model), you'll get a tray that doesn't have a space for a SIM card. 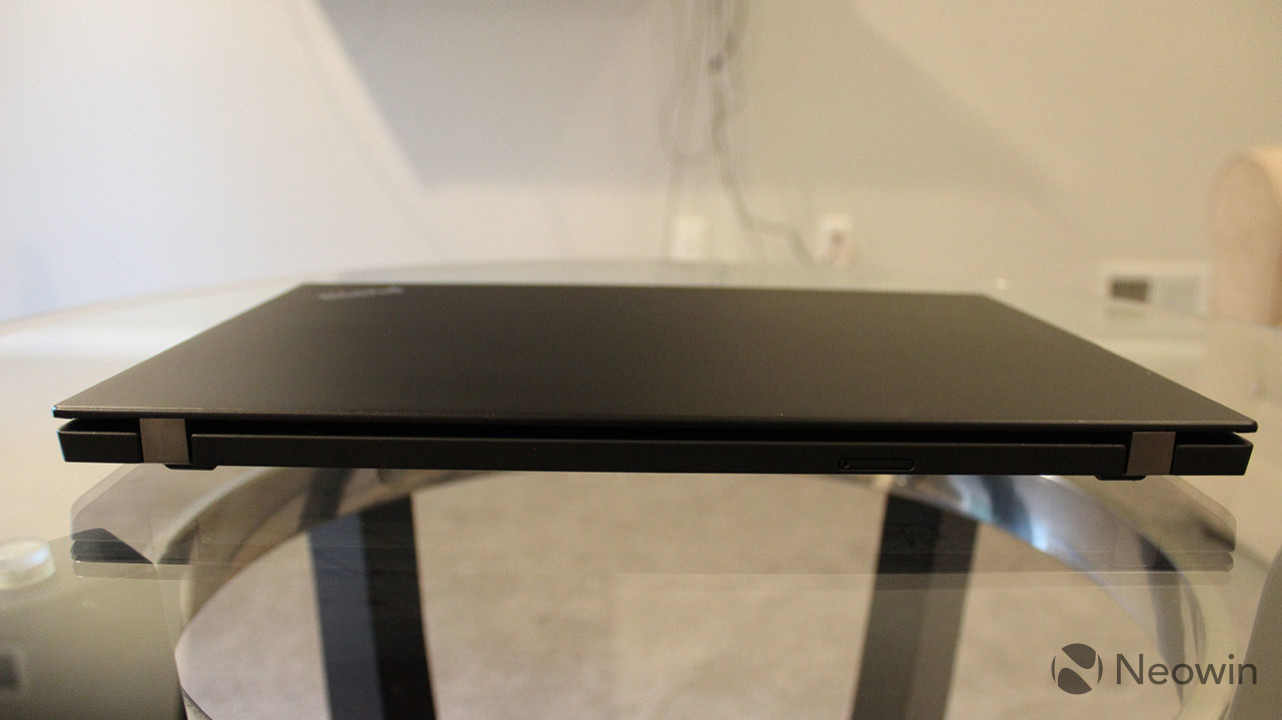 The problem with trays that require a pin tool to remove them on PCs is that it makes it hard to swap out your microSD card. The pin removal method implies that you'll want to keep your microSD card in there all the time, which I don't think is always the case. I wouldn't use this to transfer some photos from my camera; really, it's only good for storage expansion. 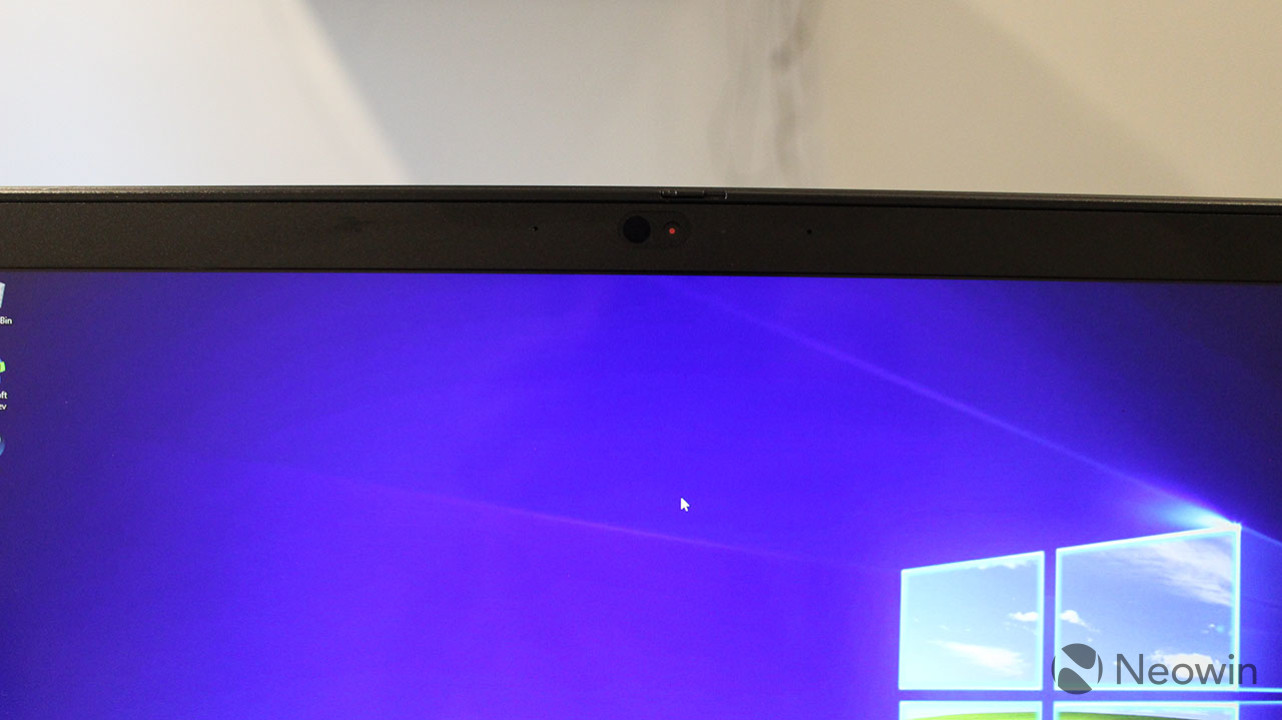 Looking at the inside of the device, we can see that there's a webcam and an IR camera, both of which can be covered with the mechanical ThinkShutter privacy guard. In the previous generation, customers were forced to choose between the IR camera and ThinkShutter, so now you can have both.

The Lenovo ThinkPad X390 includes a 13.3-inch LCD, available in WXGA, FHD, and FHD with multitouch support. The model that Lenovo sent me is the 1080p one with multitouch, and for the most part, it's fine.

While the colors are accurate in general, in that they're not washed out or oversaturated, my unit has some light bleeding in all four corners. It's not particularly noticeable during general usage, but it's definitely something that would keep me from classifying it above 'fine'. If you need a great display, you'll want to look for one of the OLED or Dolby Vision ThinkPads. 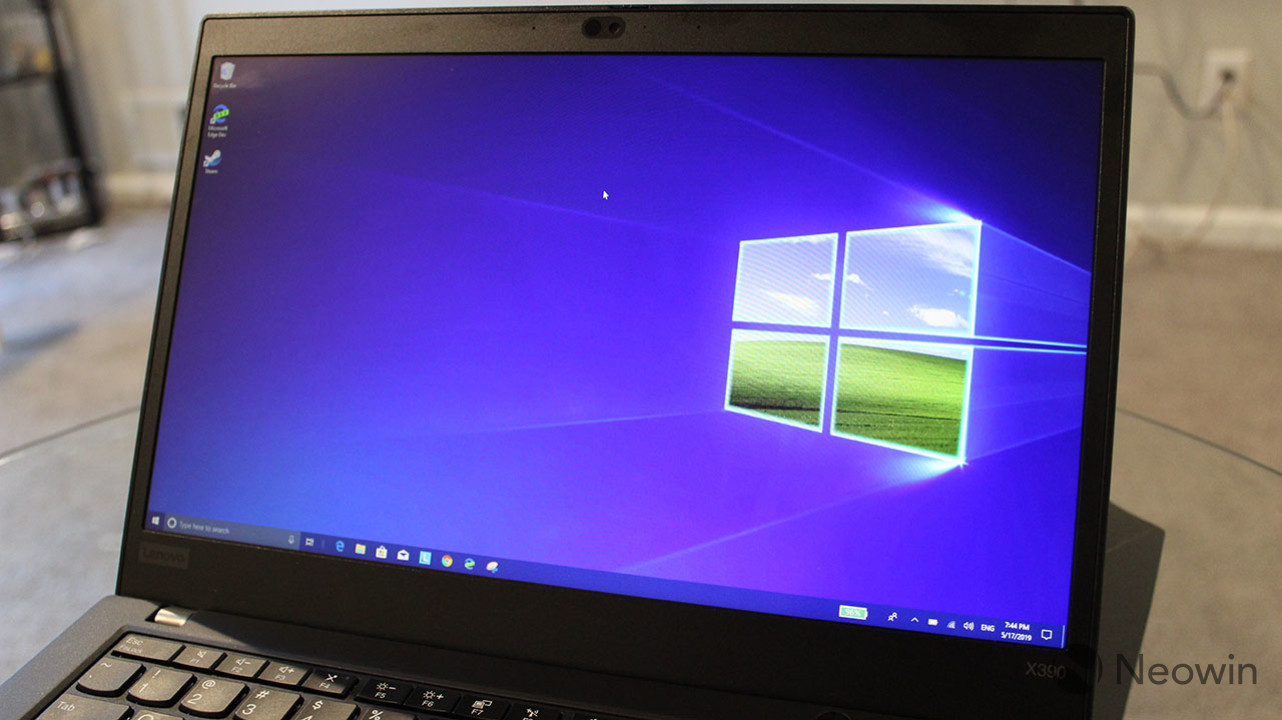 In fact, as far as anti-glare screens go, the color representation is actually pretty good. In previous generations, I've seen anti-glare displays that look way too washed out. This one gets the job done.

What's cool is that Lenovo shrunk down the bezels by 50% in this model, at least in the side bezels. The top and bottom ones are still fairly big. That's what allowed the firm to fit the 13.3-inch screen in a body that's almost the same size as its 12-inch predecessor.

While it supports multitouch, there's no pen support, although that's to be expected for a clamshell laptop.

Unlike most ThinkPad keyboards, I actually have mixed feelings about the one on the ThinkPad X390. The problem is that it's too small, and I'm pretty sure that Lenovo kept the same size as the one on the X280. This is probably the biggest drawback to the X390, something that I also pointed out in last year's review of the X280. 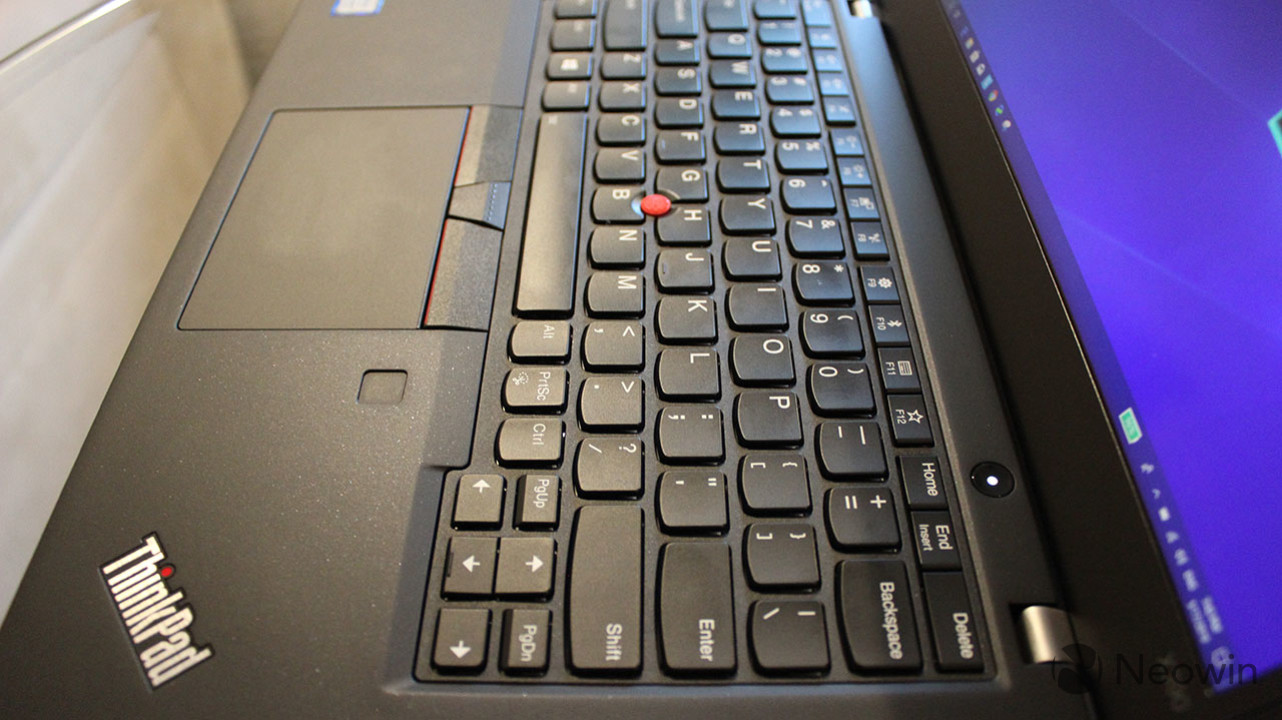 The keys are smaller, and the keyboard as a whole is smaller than other ThinkPads. The strange thing is that it didn't have to be this way. There's plenty of room on the sides of the keyboard to make it bigger; this wouldn't be a hard problem to solve.

Naturally, the keys themselves are great. Like all ThinkPad keyboards, they're accurate while still being quiet to type on. In fact, if this is the only PC you use, you'll probably get used to the size. After all, if you don't mind the size, then you'll love the keyboard.

As with most ThinkPads, there's a red TrackPoint between the G, H, and B keys. This allows you to move the pointer, using the physical buttons above the trackpad to click. It takes some getting used to, although if you're a diehard ThinkPad user, you've probably been using it for years. 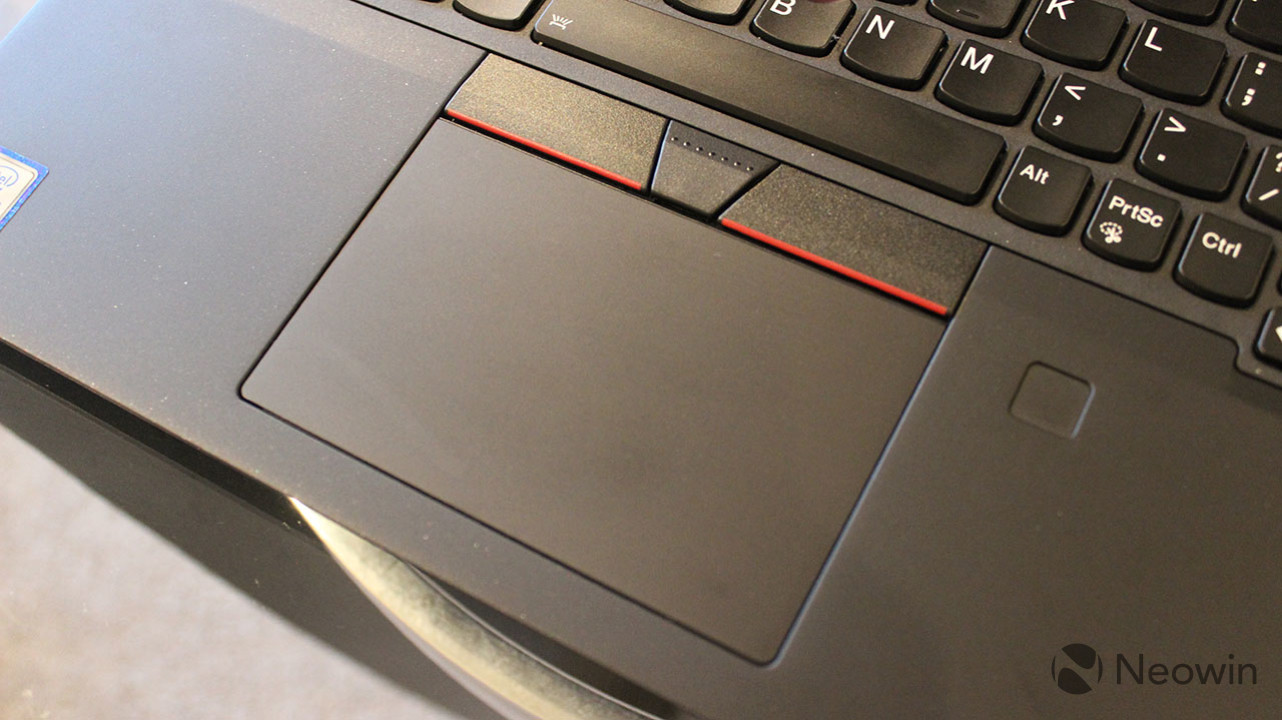 The trackpad itself is clickable as well, although those physical buttons are still quite useful for dragging and dropping, and other things that can be challenging when working with a trackpad. It uses Microsoft Precision drivers, so the trackpad is pretty good.

To the right of the trackpad is a fingerprint sensor, which is mediocre as usual. It's really great that Lenovo finally started adopting IR cameras for Windows Hello last year, because the company's fingerprint sensors aren't exactly top of the line. And of course, there's a power button that's placed above the keyboard, rather than on the side of the device like you'd find on ThinkPad convertibles.

The Lenovo ThinkPad X390 includes an Intel Core i7-8565U, 16GB DDR4 2400MHz RAM, and a 512GB M.2 PCIe NVMe SSD. The CPU is from the Whiskey Lake family, a 15W quad-core chip that's sort of Intel's second-generation eighth-generation CPU. It's not a vPro variant, and the X390 isn't available in vPro, probably because when it was announced, Intel hadn't announced the vPro flavors yet.

As you'd expect from a machine that's so light and portable, there's no dedicated GPU. This is really an on-the-go laptop, so expect it to be really good at productivity tasks, rather than GPU-intensive things like playing games or video editing. Of course, it does have an i7 and 16GB RAM, so you can do either of those things if you need to. But if they're your primary tasks, go for something with a little more mustard. 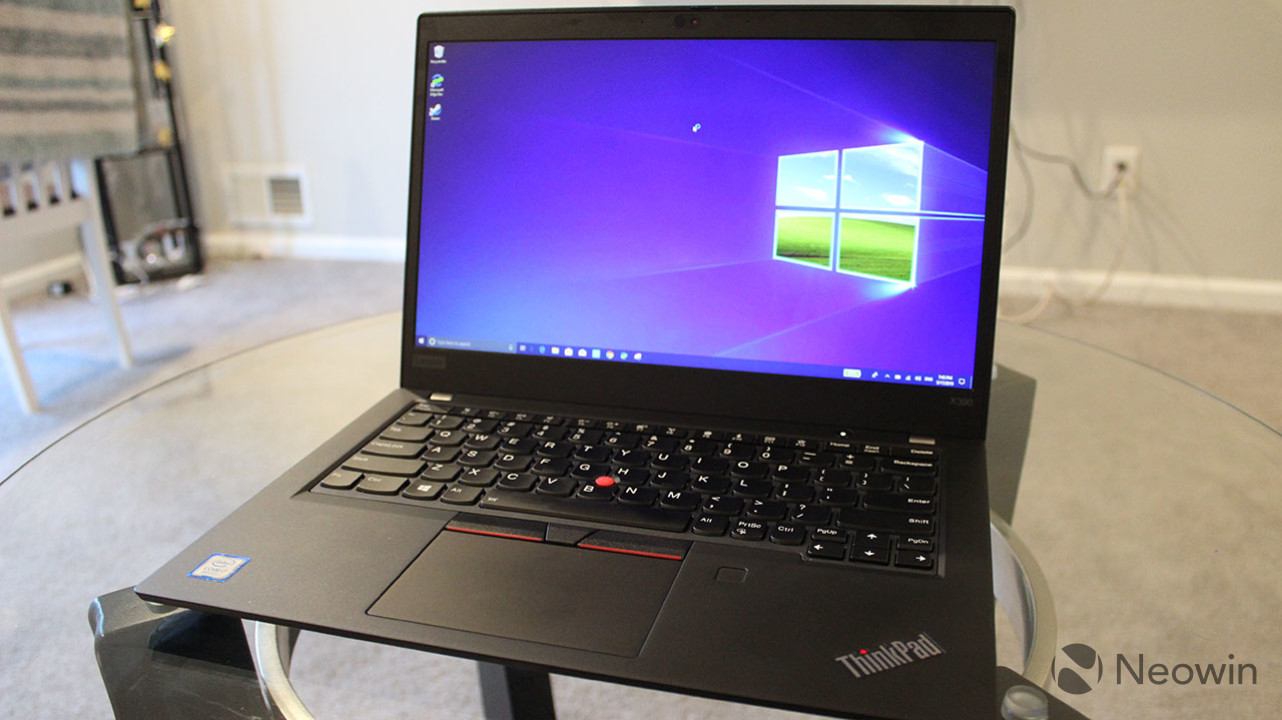 If you're doing most of your work through the browser with tons of tabs open, Office, and so on, the ThinkPad X390 is definitely up to the job.

As far as battery life goes, I was pleasantly surprised. In everyday use, I found that it gets a solid eight hours, meaning that you can bring it to work and not bring the charger. If you do bring it though, it has Lenovo's Rapid Charge technology, which gets you 80% in 1.2 hours.

As you can see, the X390 performs quite well on the test, better than 74% of other results. The next test is Creative, and it checks more GPU-intensive tasks like video editing, mainstream gaming, and so on.

The ThinkPad X390 does pretty well on the Creative test as well, which is good and expected. But again, if this stuff is your primary task, I'd urge you to check out something with a dedicated GPU. Finally, the Work test checks productivity-related tasks like writing and spreadsheets.

The Work test is where the X390 really shines. Again, this thing is engineered for productivity. I also ran the general test in PCMark 10, in case you need more context.

If you're looking for an ultra-portable laptop where you don't have to compromise on display size, this is certainly something to pay attention to, along with Dell's XPS 13. It's solid in terms of performance in build, with a pretty good display.

The keyboard is a bit cramped, although, like most keyboards, you should be able to get used to it pretty easily. In fact, that's my only real complaint. 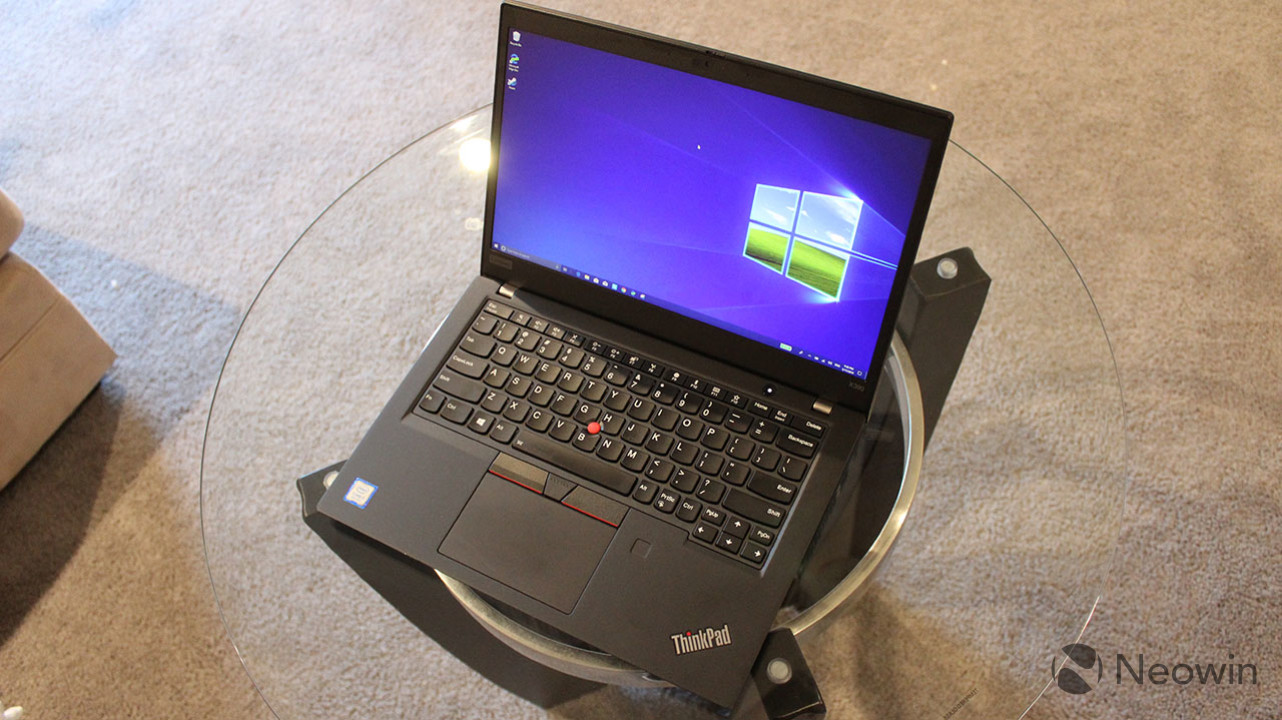 Ultimately, the Lenovo ThinkPad X390 punches above its weight, which is just 2.84 pounds. The performance is solid, and it's incredibly easy to just throw in a bag and take it with you. And at that weight, it's still got the build quality that we've come to expect from ThinkPads, with various MIL-STD-810G tests.

This PC starts at $746.25, although the model that Lenovo sent me will run you $1,484.10, which is nearly double the price of the base model. Upgrades include the CPU, RAM, storage, and display, and it's completely customizable. If you're looking for something that's easy to carry around, check it out.