Microsoft announced its next-generation Xbox One gaming console during a press event held at its Redmond, Wash., headquarters Tuesday morning, finally revealing the device that's been the subject of rampant rumors and speculation for months.

The live presentation focused heavily on television capabilities provided by the console, including the ability to integrate itself with set-top boxes from television service providers through the use of an HDMI input port, though that capability will only be available in the U.S. at launch before a global rollout. A collective program guide combines listings of live television with trending entertainment listings compiled from both friends and the Xbox Live community as a whole.

Microsoft wants the Xbox One to be used for more than just gaming.

"Today we put you at the center of a new generation in the living room – where your games look and feel like nothing else, where your TV becomes more intelligent, where all of your entertainment comes alive in one place," Mattrick said.

Entertainment options beyond live television functionality were also extensively displayed, as applications will be a major feature of the device. Xbox One's operating system combines Microsoft's Xbox software with the kernel of Windows, bridging the gap between the company's console gaming platform and entertainment services offered on its flagship operating system. The console's 64-bit architecture enables users to switch between the two environments on the fly or multitask between them. Users can snap separate programs or services to different sides of the screen, as in Windows 8 – a demonstration of this capability showcased a user simultaneously watching a movie and video chatting with a friend through Skype.

"To jump-start this new generation of development, Microsoft Studios is investing more than ever in studios around the world to create new and original [intellectual property] for Xbox One," he said. "In fact, we have more titles in development now than at any other time in Xbox history."

One of those original franchises, Remedy's "Quantum Break," blends the console's two major features – gaming and television – by featuring gameplay that parallels a bundled television show. 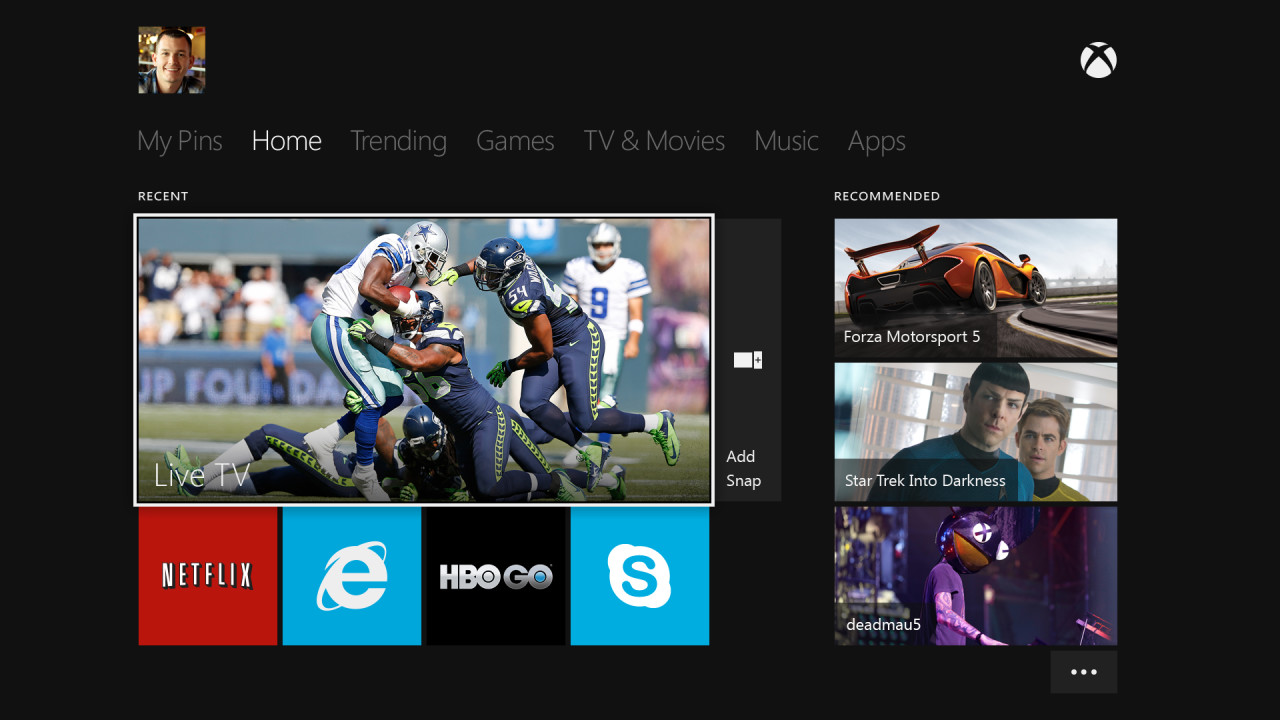 An eight-core CPU and 8GB of RAM power Microsoft's new console, which also has a 500GB hard drive, Blu-ray drive, USB 3.0 ports and built-in 802.11n WiFi. Three methods of input let users control Xbox One: a physical controller, the next-generation Kinect motion sensor, and SmartGlass apps available for tablets and smartphones. Both a controller and Kinect sensor will come bundled with all Xbox One consoles.

A next-generation Kinect sensor will be bundled with each Xbox One, which Microsoft says will be a big part of the console for gaming and TV content.

Kinect's voice commands and physical gestures were touted extensively at the event, as the sensor will allow users to wake the device from standby by simply saying "Xbox on." The next-generation Kinect's camera provides 1080p motion capture capable of reading a user's heartbeat and tracking more joints than the current-generation version of the sensor. Additionally, the sensor can instantly recognize which user is interacting with the console.

Xbox One's controller will be overhauled from Xbox 360 version to provide dynamic impulse triggers, allowing developers to program varying levels of feedback. Developers can change the levels to suit their particular games, such as slowly increasing the level of feedback when revving an engine in a racing simulator. The controller's directional pad also features increased resistance compared to the version on its Xbox 360 counterpart, changing a feature of the Xbox 360 controller extensively maligned by users.

The controller and next-generation Kinect sensor can work together to provide two simultaneous forms of input, a departure from the Xbox 360 input methods which allow only a single form of input to be used at a time. Marc Whitten, general manager of Xbox Live, said the combined input provides a "lag-free experience," a stark contrast from the current-generation Kinect sensor, which has often been chastised for its slow input recognition.

In addition to the hardware announcements, Microsoft stated Xbox One's launch will be accompanied by an updated version of Xbox Live that will rely heavily on cloud services, allowing users to play games as they're installed in segments in the background. Microsoft claims a "smart match" system will result in faster matchmaking and essentially eliminate waiting in game lobbies. Xbox Live will now also support massively multiplayer online games, which haven't been possible on current console network infrastructures.

Though Microsoft confirmed many recent rumors, it didn't address any digital rights management requirements of its upcoming console. Previous rumors indicated Microsoft's next Xbox console would limit the sale of used games and require a persistent Internet connection.

Mattrick said Xbox One will launch "around the world later this year," though no specific release date or price was announced.