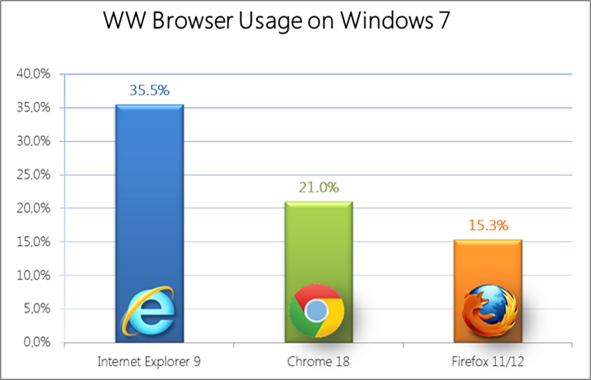 As they do at the start of every month, Microsoft updates its official Internet Explorer blog with Internet Explorer 9 user stats in Windows 7 during the previous month. This time, the stats come for April 2012, and Microsoft says that worldwide, IE 9 is used by 35.5 percent of PC users on Windows 7, compared to 21 percent for Google's Chrome 18 and 15.3 percent for Mozilla's Firefox 11/12. In the US, IE 9's stats jump up to 52.9 percent compared to 15.1 percent for Chrome 18 and 12.5 percent for Firefox 11/12.

The stats come from Net Applications, which Microsoft considers to be more accurate than other sources such as StatCounter. However, Net Applications' site shows that for all web browser versions on all operating systems IE 8 still leads worldwide with 26.22 percent. IE 9 is next with 15.91 percent, followed by Chrome 18 with 13.9 percent, and Firefox 11 with 11.35 percent.

One interesting tidbit is that Firefox 3.6 accounted for 2.43 percent of web browsers worldwide in April 2012, according to Net Applications. Mozilla shut down official support for Firefox 3.6 last week and plans to automatically update the browser to Firefox 12 sometime later this month, although users can set the browser to keep this from happening if they choose to.