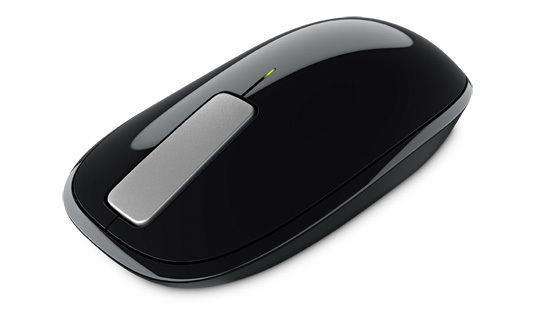 After being leaked by a web site earlier this month, Microsoft has now officially revealed the newest member of its long running PC mouse hardware family. It's the Explorer Touch Mouse and it's now on sale at Microsoft's web site for $49.95 in two colors, black and storm grey. There's also a Limited Edition version of the mouse that is priced the same and has the same features but comes in two different colors, sangria red and rust red. This is the third member of the Touch Mouse family that includes the original Touch mouse and the Arc Touch mouse.

The wireless Explorer Touch mouse has a strip on top that takes the place of the traditional scroll wheel. The strip can scroll documents on screen with a flip of the finger as it goes up and down or from side to side. It has five programmable buttons and also uses Microsoft's own BlueTrack technology that uses a blue beam that supposedly allows the mouse to be used on nearly every surface. The mouse also requires 100 MB of hard drive space and Microsoft claims it can be used for up to 18 months on one single charge. The mouse's nano transceiver can be put into the PC or stored away inside the mouse when not in use.