Microsoft normally likes to tell the whole world when it puts in a new feature on the Bing website, but this week a very nice addition has been revealed with no fanfane from the company; people who go to the site can now bring up a 35 button scientific calculator. 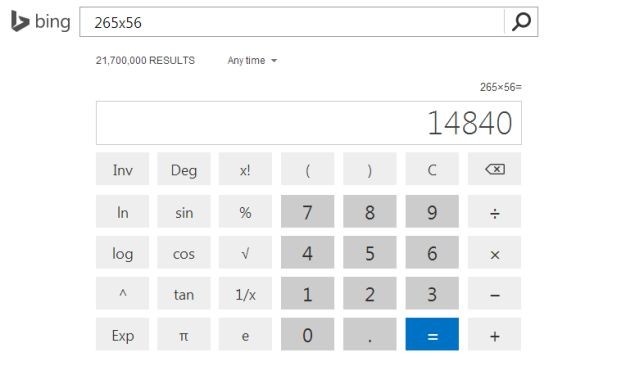 All a user has to do to activate the calculator is to go to Bing.com and type in any simple math problem in the search box. Bing will then not only give the user the answer to the problem but also generates the virtual calculator, which can handle more advanced math issues like sines, cosines, and tangents, in addition to simple addition, subtraction and more.

While it's great that Microsoft has put in this kind of functionality in Bing, Google added its own calculator on its search site nearly two years ago. Also, for some reason, the Bing calculator does not appear on at least some mobile web browsers such as Windows Phone's Internet Explorer or Google's Chrome. Hopefully Microsoft will expand this addition to more platforms in the future. In the meantime, PC users can at least go ahead and use the calculator to their heart's content.