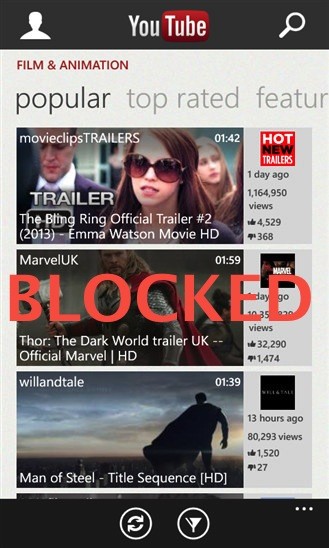 Microsoft has published a letter that goes after Google and their antics of blocking the YouTube app. The letter, which is posted below, attacks Google and claims that the reason the application has been blocked are manufactured solely to shut down Microsoft’s application.

Microsoft claims that the reason Google blocked the YouTube app is because they did not use HTML5 for the foundation of the YouTube application. According to Microsoft, this was an odd request since the iOS and Android app currently do not use HTML5 and that building one out, using HTML5, would take significant time and resources.

We could paraphrase the rest of the letter for you but this is one of those times that Microsoft absolutely nailed it on the delivery. The letter clearly calls into question Google’s love for openness and even the ‘Don’t be evil’ motto, if you read between the lines.

The full letter is posted below:

You may be wondering what happened to the YouTube app for Windows Phone. Last May, after we launched a much improved app on our platform, Google objected on a number of grounds. We took our app down and agreed to work with Google to solve their issues. This week, after we addressed each of Google’s points, we re-launched the app, only to have Google technically block it.

We know that this has been frustrating, to say the least, for our customers. We have always had one goal: to provide our users a YouTube experience on Windows Phone that’s on par with the YouTube experience available to Android and iPhone users. Google’s objections to our app are not only inconsistent with Google’s own commitment of openness, but also involve requirements for a Windows Phone app that it doesn’t impose on its own platform or Apple’s (both of which use Google as the default search engine, of course).

When we first built a YouTube app for Windows Phone, we did so with the understanding that Google claimed to grow its business based on open access to its platforms and content, a point it reiterated last year. As antitrust enforcers have launched investigations against Google – some of which are still ongoing – the company has reiterated its commitment to openness and its ability to stick to its openness commitments voluntarily.

With this backdrop, we temporarily took down our full-featured app when Google objected to it last May, and have worked hard to accommodate Google’s requests. We enabled Google’s advertisements, disabled video downloads and eliminated the ability for users to view reserved videos. We did this all at no cost to Google, which one would think would want a YouTube app on Windows Phone that would only serve to bring Google new users and additional revenue.

There was one sticking point in the collaboration. Google asked us to transition our app to a new coding language – HTML5. This was an odd request since neither YouTube’s iPhone app nor its Android app are built on HTML5. Nevertheless, we dedicated significant engineering resources to examine the possibility. At the end of the day, experts from both companies recognized that building a YouTube app based on HTML5 would be technically difficult and time consuming, which is why we assume YouTube has not yet made the conversion for its iPhone and Android apps.

For this reason, we made a decision this week to publish our non-HTML5 app while committing to work with Google long-term on an app based on HTML5. We believe this approach delivers our customers a short term experience on par with the other platforms while putting us in the same position as Android and iOS in enabling an eventual transition to new technology. Google, however, has decided to block our mutual customers from accessing our new app.

It seems to us that Google’s reasons for blocking our app are manufactured so that we can’t give our users the same experience Android and iPhone users are getting. The roadblocks Google has set up are impossible to overcome, and they know it.

Google claims that one problem with our new app is that it doesn’t always serve ads based on conditions imposed by content creators. Our app serves Google’s advertisements using all the metadata available to us. We’ve asked Google to provide whatever information iPhone and Android get so that we can mirror the way ads are served on these platforms more precisely. So far at least, Google has refused to give this information to us. We are quite confident that we can solve this issue if Google cooperates, but fixing Google’s concern here is entirely within Google’s control. If Google stops blocking our app, we are happy to work with them on this, entirely at Microsoft’s expense.

Google also says that we are not complying with its “terms and conditions.” What Google really means is that our app is not based on HTML5. The problem with this argument, of course, is that Google is not complying with this condition for Android and iPhone. Again, we’re happy to collaborate with Google on an HTML5 app, but we shouldn’t be required to do something that apparently neither iPhone nor Android has successfully figured out how to do.

Google raises concerns about our branding too. The funny thing about this point is that we’ve been using the same branding continuously since 2010 for an inferior YouTube app. Now that we have an app that gives users a fuller YouTube experience, Google objects to the branding (even though we’ve taken additional steps to clarify that we are the author of the app). Go figure.

Finally, Google cites a degraded experience. Since 2010, Google permitted a Windows Phone app that was far below the iPhone and Android app experiences. Reviews of our new app are unanimous that the experience is much improved, and we’re committed to making adjustments to improve it further. If Google were truly concerned about a degraded experience, it would allow our users access to the new YouTube app they love.

We think it’s clear that Google just doesn’t want Windows Phone users to have the same experience as Android and Apple users, and that their objections are nothing other than excuses. Nonetheless, we are committed to giving our users the experience they deserve, and are happy to work with Google to solve any legitimate concerns they may have. In the meantime, we once again request that Google stop blocking our YouTube app.