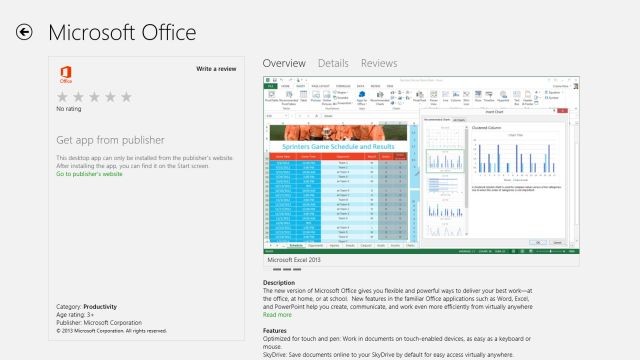 If you have a copy of Windows 8 and have been wondering if Microsoft would release the new version of Office 2013 as a desktop app in the Windows Store section, wonder no more: Microsoft Office 2013 has appeared in the Store just a few hours ago.

Of course, since Office 2013 is a desktop app, the section in the Windows Store is actually something of a placeholder. You still have to click on an URL which will open up IE10 that will then take you to the Office website where you can complete your purchase.

Still, for those of you who are using the Modern UI in Windows 8 almost exclusively (and yes, we know there are some of you out there), this should be a quick and easy way to download and install the new version of Office. Microsoft has said that Office 2013 has been made with Windows 8 in mind with a number of touchscreen-based features. Office 2013 also has its own app store with over 200 third party add-ons for the software suite.

People who own a Windows RT device, including the current version of Microsoft's Surface tablet, have had access to a free full version of Office Home and Student RT 2013 since its launch in late October.