Amazon has a long history of making a lot of different types of products, throwing them against the wall, and seeing which ones their customers like. Some, like the Fire Phone, fell flat on their faces, while others, like the Kindle, have been amazing sellers for the company. It's hard to predict what will be a hit with customers, and looking at the Amazon Dash Buttons proves that.

So when Amazon first announced the Echo device back in November, 2014, many people were skeptical. Some felt the price was too high, others assumed their phone would work just as well, and many didn't want an "always listening" device in their home. However Amazon made a smart move and instead of simply creating a product, they made a platform that any company can hook into. In my review of the product last year, I specifically said that in its current form, the device had potential, and since that time, the potential has come out: The platform now integrates with many home automation systems (including Nexia, Nest, and WeMo and Hue), you can pay your Capital One credit card, and there's over 500 different "skills" available with the device. 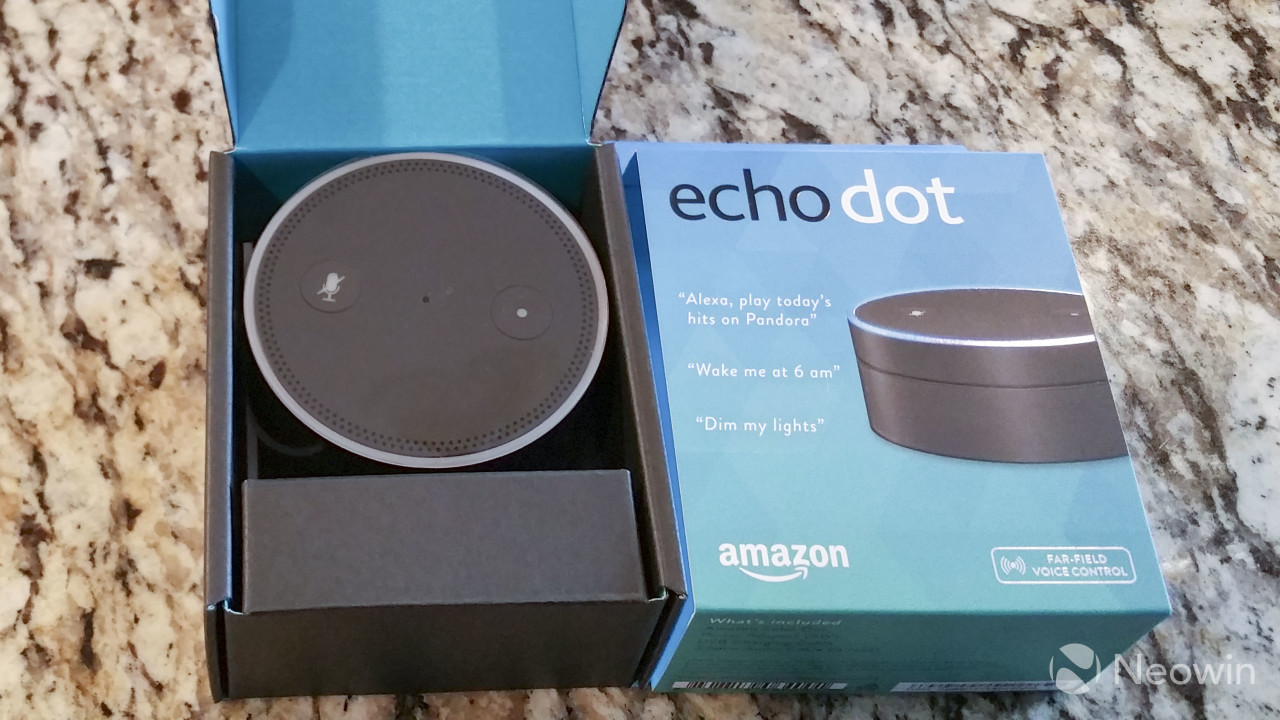 The Echo Dot is, for all intents and purposes, a miniature version of Amazon Echo. If you've seen the original Echo, picture chopping off the top inch-and-a-half, adding a 3.5mm headphone, and you have what the Echo Dot looks like. In addition, it can work by itself: The full-sized Amazon Echo is not required to be in your house, although you'll need to find someone with the original Echo to actually purchase the Echo Dot for you because you currently can't purchase it on Amazon's website.

I knew that Echo Dot was going to be a tiny Echo, but when I received the package in the mail, I was still a little surprised at how small and light the packaging was. 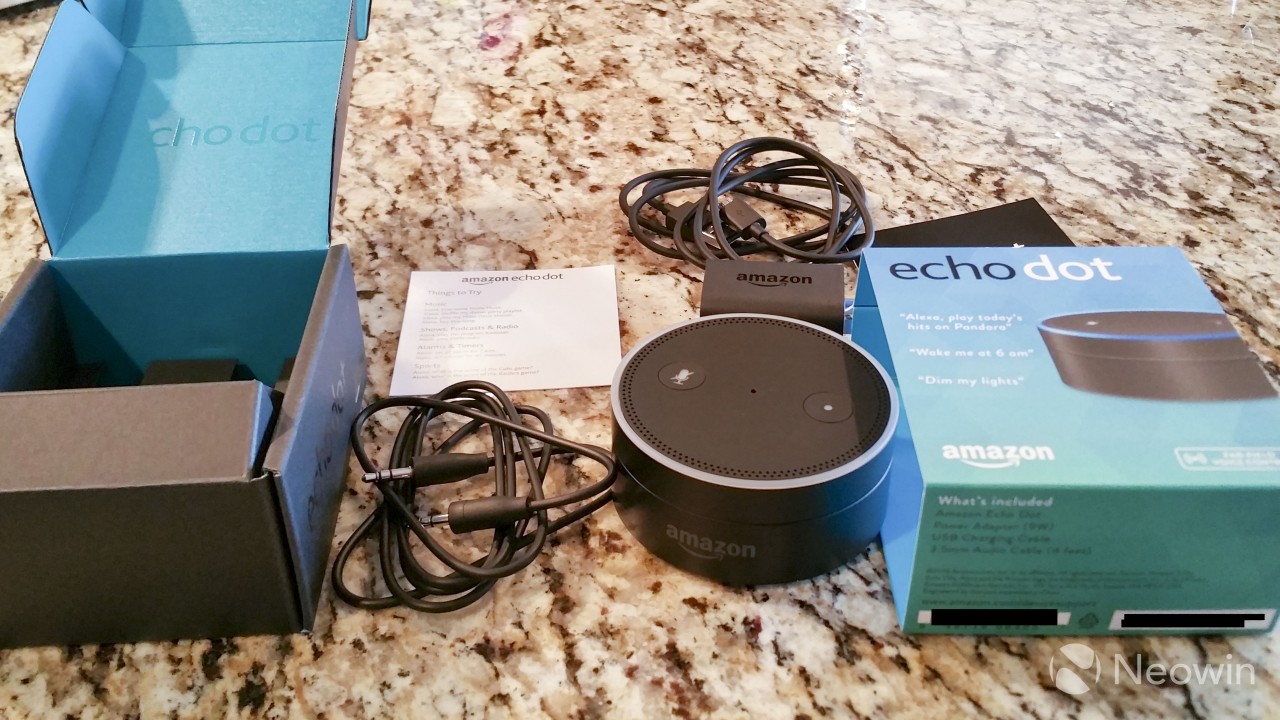 The box itself is only slightly larger than the Echo Dot, with a little extra room to store the included accessories which consist of the power adapter (and USB cable) and a 3.5mm cable to connect Echo Dot to an external speaker. Other than that, the only other thing in the box was a "Things to try" document for those new to the platform, and a tiny instruction manual.

What's the same with Echo and Echo Dot?

Amazon Echo and Amazon Echo Dot have a lot of similarities, not the least of which is the activation name, although I'm still trying to figure out where the name "Alexa" comes from. It's important to note that you can currently choose between three different "wake words" for each of your devices: Alexa, Amazon, or Echo. Strangely, "Dot" is not a choice.

Both devices have the same high-quality microphone array, allowing the Echo Dot to hear your voice commands just as well as the Echo. During my testing, I put the Echo Dot in our front room, roughly 30 feet away from her big sister. Even that wasn't far enough, as frequently both devices would try answering a question or play music for me when asked. I'd recommend changing the wake word if you're going to use Echo on the same floor as Echo Dot.

The voice recognition accuracy is also the same between the devices. While it's continuously getting better, it's frustrating when Echo either doesn't hear the wake word, or doesn't understand the question you're asking. That said, compared to its cell-phone competitors like Cortana and Siri, the voice accuracy seems to be much higher.

The controls on both devices are also the same. The top of the Echo Dot is a ring that can be turned to modify the volume, the mute button tells the device to stop listening, and the action button tells it to listen for a command.

Although there are very few differences between Amazon Echo and Amazon Echo Dot, they will probably determine which device you want to purchase for your home.

The first, and most obvious difference, is that Echo Dot is lacking the high quality speaker of its big sister. You can still use the device the same as you do with the original, but the audio quality is lacking. It still works great for hearing the weather or a news report, and can still control your home automation system the same as before, but if you're going to use it to listen to music, you'll find it lacking as the speaker is worse quality than even most laptops.

Which leads me to Echo Dot's biggest difference: an integrated 3.5mm audio jack. If you want the smaller footprint of the Echo Dot, but still want high quality audio, you can easily connect the (included) 3.5mm audio cable to any speaker system. It's important to note that when you do this, the internal speaker on Echo Dot is disabled. This means if your speaker is turned off (like in a stereo system), you won't be able to hear anything Echo Dot says. 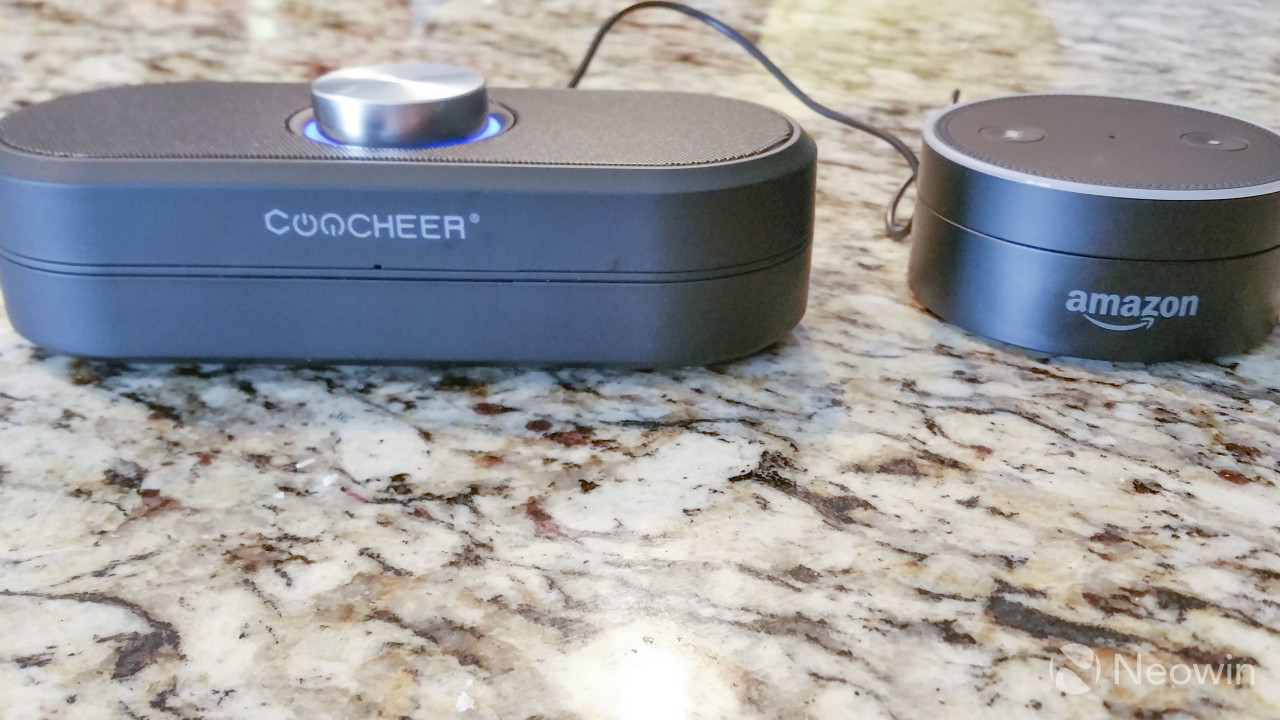 To test this, I connected my Coocheer CH-080 Bluetooth Speaker to the Echo Dot. As expected, the audio quality was much better and sounded more on-par with Dot's big sister, albeit with less bass. Being able to quickly connect a nice $20 portable speaker and have a comparable experience to the original Amazon Echo is a nice way to save some money at the expense of counter space. Having the flexibility to connect any stereo system to Echo Dot is fantastic.

I did notice that Echo Dot stops using the built-in speaker whenever a cable is connected to the 3.5mm jack, regardless of whether a speaker is connected on the other end, so keep that in mind when setting up the device. 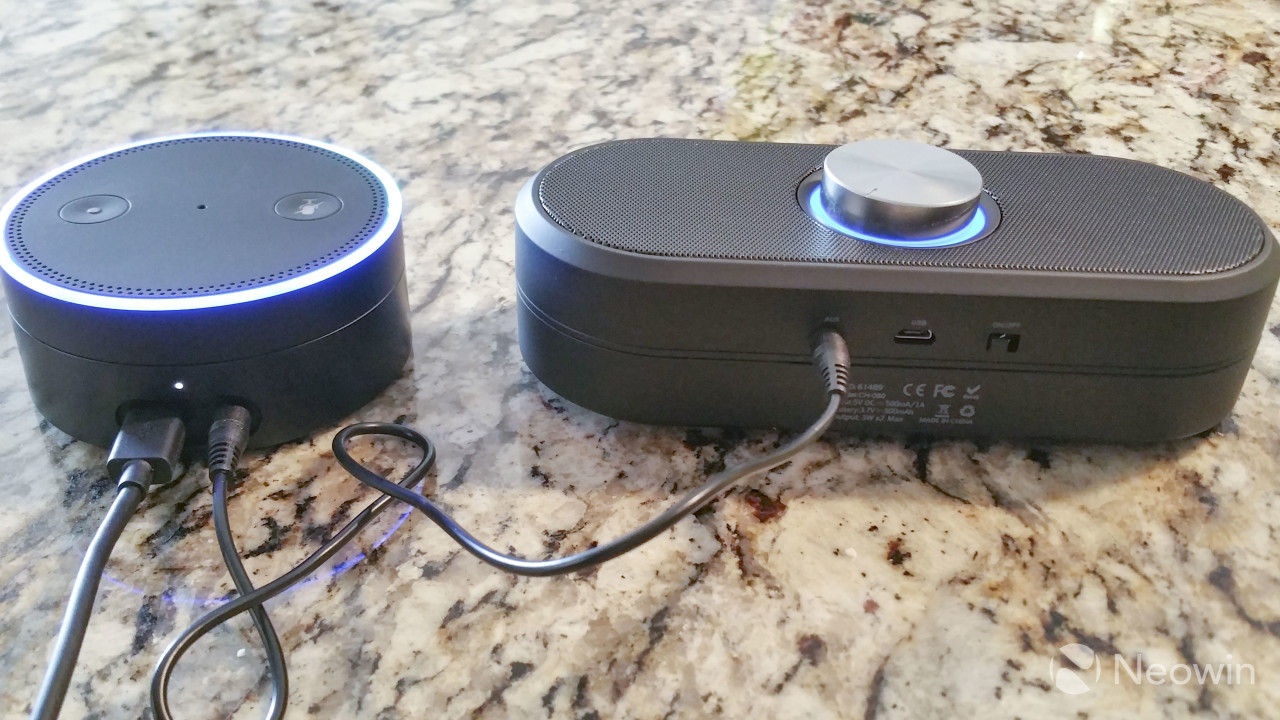 The other big difference between these siblings revolves around Bluetooth. With the original, you would pair a Bluetooth source to the Echo so that you could play music from your phone or other device through the Amazon Echo speaker. However the new model reverses this, allowing you to send audio from the Echo Dot to a Bluetooth speaker. This is useful if you don't want to use the 3.5mm connection but still want higher quality audio output.

Which one should I get?

Get Echo if you want to play music without a second speaker. Get Dot if you don't care about music. Or get both if you want control from different rooms without breaking the bank.

If you're looking to add voice recognition into your home, but either don't care about audio quality or are planning on pairing it with a secondary speaker, the Amazon Echo Dot is a great product and at only $90, is a tremendous value compared with Dot's big sister. If you have a supported home automation system, being able to turn lights on and off, change the thermostat, and find out general information about the sensors in your home without having to pull up an app is amazing.

If you're going to use the device to play music from your Amazon account or sites like Pandora or TuneIn Radio, and don't already have an external speaker, then you're probably better off purchasing the original Amazon Echo for $180, because the speaker in the original device is great. 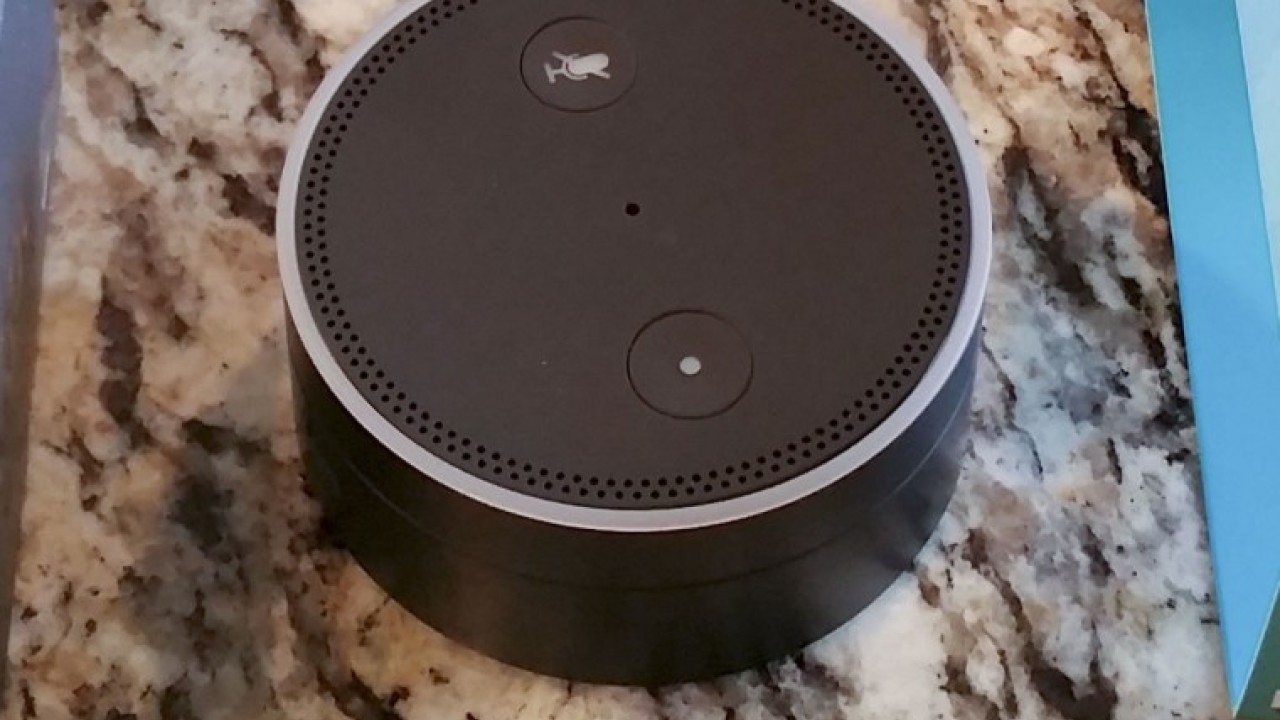 The Amazon Echo and Echo Dot devices have very few weaknesses, and they will be fairly subjective for most. One complaint I've heard people bring up is the privacy concerns around having a device "always listening" in on you. Unfortunately, that cat is already out of the bag, with devices like the Xbox One Kinect, and even your own cell phone always listening. If you purposely don't own a cellphone, tablet, or laptop with a microphone, you'll probably want to avoid the Echo and Echo Dot as well.

The other Echo Dot weakness is the lack of a quality speaker, but that was actually a design decision for the device, as it was created to link with a good speaker, so it's hard to count that as a negative.

It's clear that Amazon has made an amazing product at a great price point, and support for the Echo brand is only going to get better.