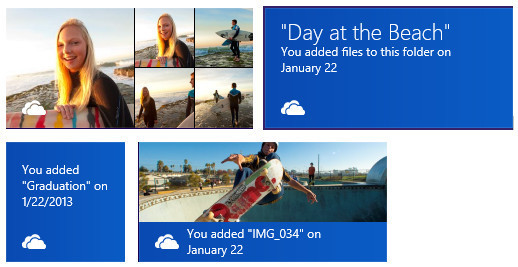 A new report claims that Microsoft is planning to add quite a few new features to its SkyDrive cloud data storage service in the near future. That's according to Liveside.net, which has broken a number of stories concerning SkyDrive over the past several months, including the recent addition of uploading panorama photos for Windows 8.1 users.

Liveside.net's latest story claims, via unnamed sources, that Microsoft will add a new way to share SkyDrive files with others; the rumor is that Microsoft will soon allow SkyDrive users to pick up to 100 files from different locations. The user will then have a custom list of files that can then be shared with others. This new feature is supposed to help others to find shared files more quickly than the current method, which sometimes makes them go through many different folders to find the one that is being shared by the SkyDrive user.

Yet another new feature that's mentioned in this story is what's being called folder mounting. Currently, the desktop SkyDrive client won't allow any files that are shared with your folder to be synced up to your PC. This new feature will "mount" files from SkyDrive accounts that are being shared with your account so they can be synced with your PC files and allow for offline file access to these shared files for the first time.

Finally, the story claims that Microsoft will soon allow for device settings to be backed up and managed on a SkyDrive account. The article does not state what devices will have this support but adds that both Windows 8.1 and Windows Phone 8 already support device back ups to SkyDrive.