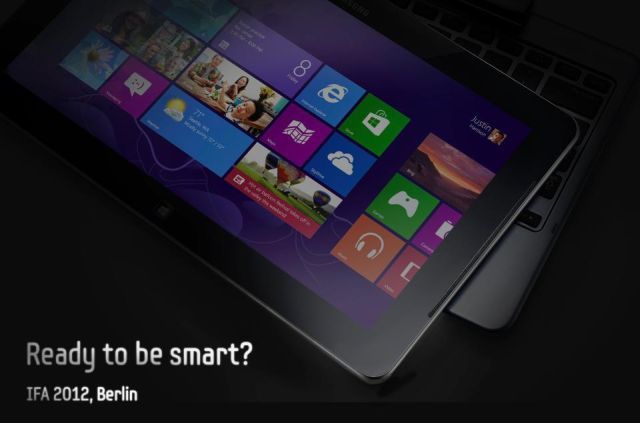 Last week, Samsung teases the world with a YouTube video that showed glimpses of an unannounced notebook. The video's description said that the device would be "Windows 8-ready". Now the company has posted up a new image that reveals even more about Samsung's Windows 8-based product.

The Samsung Notebook Facebook page shows the device that's clearly running the "Modern" Windows 8 user interface. It also confirms that the product will be a notebook-tablet hybrid, with a screen that will swivel around to expose a physical notebook keyboard.

The caption of the photo shows that Samsung will offer details of its Windows 8 hybrid at the IFA trade show in Berlin this week. Samsung will be holding a press conference during the event on Wednesday, where it could also offer some details about its upcoming Windows Phone 8 devices.

As we have reported before, Lenovo used its Twitter page last week to tease the rest of the world about its Windows 8-based IdeaPad Yoga notebook-tablet hybrid product. All of this activity means that we will be in for a ton of Windows 8 and Windows Phone 8 hardware announcements over the next few week, leading into the October 26th consumer launch of Windows 8 itself.