Development of polling app Straw seems to be ticking along pretty well, and after reaching version 2.0 last year, it later went on to get a new web interface, along with an integrated Bing image search function.

Today, another new feature is available on Straw: the ability to create custom topics, rather than being restricted to the predefined topics list. 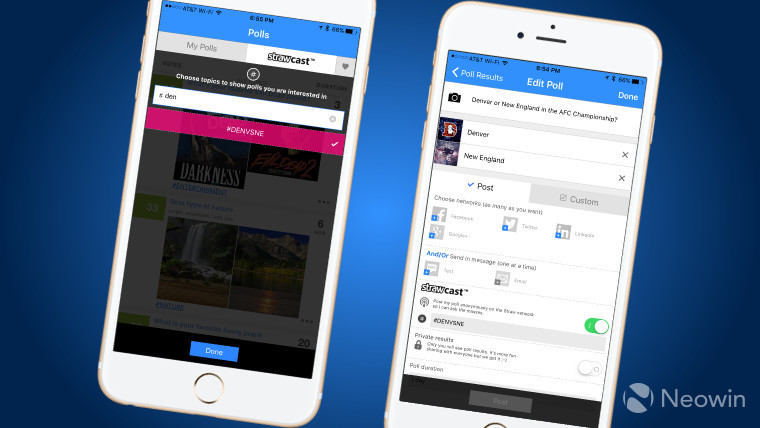 The existing list of topics covers a wide range of general themes, such as politics, news and sports, but with the new feature - which is being delivered initially as a beta - users can define their own new topics.

You can still post to the existing topics, but when you put together a new poll and opt to add it to StrawCast - making it visible to users around the world - you'll be given the option to create a new topic of your choosing. Topics are identified by hashtags, and if your chosen hashtag is already in use, you can choose to add your poll to that topic, or create a unique one instead.

This allows users to create highly specific polls on current events or local issues. Voters can easily find these polls by tapping on the StrawCast tab, tapping the # symbol, and then entering the hashtag of the topic they're looking for.

The new custom topics feature is rolling out today in preview form for now, on iOS, Android and Windows Phone, but further refinements and additional functionality are promised in the coming weeks.

While not officially a Microsoft app, Straw was developed by some of the company's employees, including Ben Rudolph (better known in the Microsoft community as 'Ben the PC Guy').

The latest version of Straw, including StrawCast Custom Topics beta, is available now as a download for: