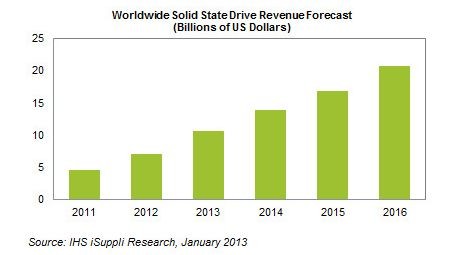 While sales of Windows 8 notebooks and ultrabooks have apparently gotten off to a slow start, a new study predicts that Windows 8 PCs will help to boost the sales of solid-state drive (SSDs) to double their amount in 2013 compared to 2012, and even higher sales in the next few years.

iSuppli's study says that in 2012, SSD shipments were at 39 million units; the research firm claims that number will go up to 83 million units in 2013. By 2016, yearly sales of SSDs are predicted to be as high as 239 million units, which iSuppli says will take up about 40 percent of the total hard drive market.

The newest wave of ultrabooks loaded with Windows 8 has started to generate enthusiasm, with the superthin computers likely to pick up more steam this year. Upcoming ultrabooks based on Intel Corp.’s Haswell microprocessor architecture also have the potential to catch on with consumers. These factors should boost SSD prospects this year.

iSuupli also points out that Flash memory prices continue to go down, which will make SSDs more affordable and thus more attractive for PC makers to include in their products. All of these factors will make it far more likely for your next PC to have an SSD inside instead of the regular mechanical hard drive.