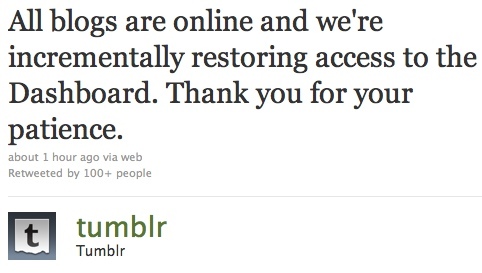 Sweet relief everyone, Tumblr confirmed that it is now back online and all blogs on the service are up and running again. For those that have been living under a rock, Tumblr went down on Sunday afternoon and hipsters everywhere were bent out of shape. Unable to blog, Tumblr users took to twitter en masse and began to lament the loss of their blogging service. Tweets about kittens, moleskins, and Starbucks tripled. Tumblr responded on Monday with several tweets that confirmed the service was dealing with a database cluster problem and working hard to fix it. After almost 24 hours of downtime, the service has been restored without the loss of data. You can almost hear the collective sigh of relief from millions of users.
Thus far, Tumblr has provided only a few details on the exact cause of the outage. The service claims it was a database and migration issue and not the result of an attack from 4chan. It was not long ago that 4chan and tumblr waged an online war over the suspected theft of 4chan memes by tumblr. The two communities waged a denial of service attack against each other that resulted in both websites going down. Now that the service is back online, hipsters can grab a cup of joe and get back to their blogging. Non-hipsters can rest easy as their twitter feed will soon be clear of tweets rife with extreme tumblr withdrawal.