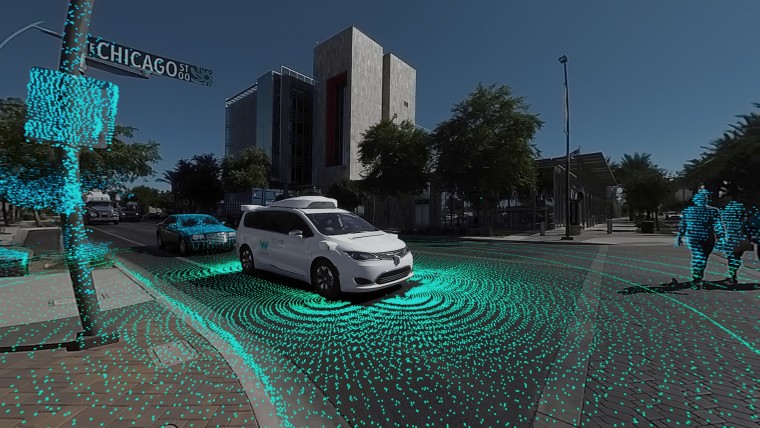 Alphabet's autonomous cars subsidiary, Waymo, has been testing its vehicles on the streets since the end of January 2017, when a fleet of 100 autonomous Chrysler Pacifica minivans hit the streets of Mountain View, California and Phoenix, Arizona. Since then, the company has offered free rides to residents of Phoenix and by the end of last year, some journalists were given a test-drive in its secretive "Castle" facility in California.

But Waymo is now broadening its public relations efforts with the release of a 360-degree video featuring the technology behind its self-driving cars. The company's goal is to demonstrate Waymo’s constant 360-degree field of view in order to "help people understand our technology and how it can make it safer and easier for everyone to get around", as stated in a Medium post.

The video, which was recorded during a trip on the streets of Phoenix, was later edited based on a simplified amount of the data collected by the car. Also, as you can see in the picture above, lots of graphics were added to make the video pleasant to the human eyes - of course, that is not how Waymo actually sees the world.

Either way, it is really cool to watch as the car makes real-time predictions of what each pedestrian, cyclist or vehicle will do next. By the end of the video, you are taken to the backseat to experience a virtual ride without a driver.

Of course, the timing for the release of this video could not be better. Two weeks ago, Waymo was authorized by the Arizona Department of Transportation to start charging riders of its fleet of autonomous minivans around the state. On﻿ Monday, the California Department of Motor Vehicles decided to authorize autonomous vehicles to ride without a person in the driver’s seat, starting April 2. The previous implementation was required so a human could take control in case of an emergency. However, the new rules state that companies with self-driving vehicles need to be able to take control of them remotely, and communicate with law enforcement and other drivers if something goes wrong.

As the government starts to authorize the first wave of autonomous cars to take the street and to charge for riding services, it is now up to the private sector to convince people of the system's benefits.