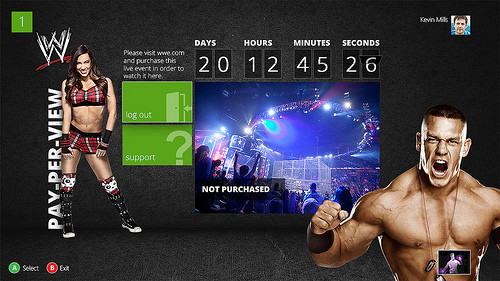 Even though the World Wrestling Entertainment is more of an entertainment group than a sports league, there's no doubt that the wrestlers involved in WWE are true athletes when it comes to their actions inside the ring. That action, combined with the over-the-top characters and storylines, has kept WWE hughly popular around the world.

Today, Microsoft is launching the official WWE app for the Xbox 360 that will give users a way to get more information about the people and events behind the league. The biggest feature of the WWE Xbox 360 app, according to the Major Nelson site, is that owners of Microsoft's game console will be able to watch the monthly pay-per-view events the WWE holds directly on the console. You will still have to go to the official WWE.com website to pay for the event.

The Xbox 360 app, which is just for U.S. Xbox 360 users, is being launched just a few days before the biggest WWE pay-per-view event of all: WrestleMania XXIX, which is being held Sunday. The main event is a matchup between The Rock and John Cena, in a rematch of last year's WrestleMania conflict that The Rock managed to win.

Last July, the WWE released an official app for Windows 8, more than three months before the operating system was officially launched.