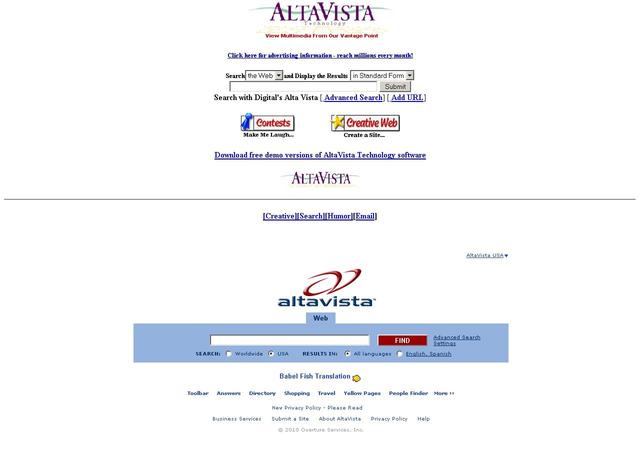 Tough times at Yahoo could mean the end of web icon AltaVista.

All Things Digital reports that in addition to cutbacks in the company's product division, Yahoo plans to close down the once-popular search engine, along with other projects including MyBlogLog, Yahoo! Picks, Yahoo! Bookmarks, Yahoo! Buzz and Delicious.

Launched on December 15 1995 by researchers at Digital Equipment Corporation's Western Research Laboratory, AltaVista was once the go-to site for web search, with hits leaping from 300,000 on launch day to more than 80 million two years later. While those stats may seem miniscule by today's standards, it is worth remembering that AltaVista began in a time when many were still declaring the internet a failure. The first version of Internet Explorer had launched just months before AltaVista.

The search engine became the provider of search results for Yahoo in 1996, before being sold to Compaq (since acquired by HP), who redesigned the site as a web portal. But when the dot-com bubble burst in 2000, AltaVista was hit hard, resulting in multiple rounds of layoffs and the withdrawal of a stock offering which was expected to bring in around US$300 million. A radical redesign and retooling of search methodologies in 2002 did little to stem the tide of users going elsewhere for their searches, particularly to Google, which was enjoying a meteoric rise. Today, the site does not even make the top 500 sites on the web, according to Alexa.

In a statement, a Yahoo spokesperson confirmed some projects would be shut down, but did not specify which would face the axe.

Part of our organizational streamlining involves cutting our investment in underperforming or off-strategy products to put better focus on our core strengths and fund new innovation in the next year and beyond. We continuously evaluate and prioritize our portfolio of products and services, and do plan to shut down some products in the coming months such as Yahoo! Buzz, our Traffic APIs, and others. We will communicate specific plans when appropriate.