The long awaited BBC iPlayer iPad app for the world is launching today, with 11 European countries being the first to have access to the subscription-based service. Australia, Canada and the United States are due to have access to the app later this year, as the BBC attempts to trial a worldwide iPlayer in a one-year pilot. The 11 countries to be included in the first part of the trial are Austria, Belgium, France, Germany, Italy, Luxembourg, The Republic of Ireland, The Netherlands, Portugal, Spain and Switzerland. 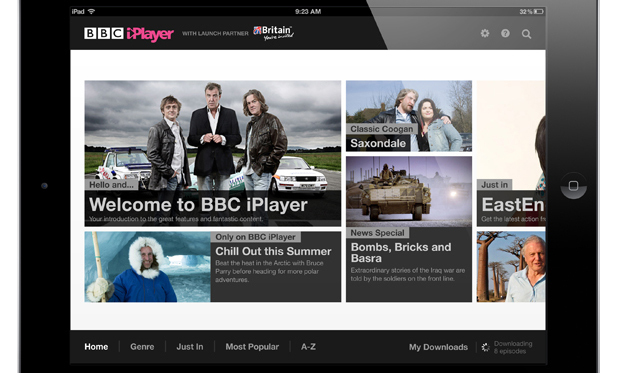 In a report from the Guardian, the application will offer a limited amount of content for free, which will involve pre-show advertising and sponsorship. The majority of content, however, will be under the subscription service which is due to cost users €6.99 a month or €49.99 for a year. The app will include a series of features that are not available in the United Kingdom version, including the streaming of shows via 3G and a downloading feature for offline viewing.

At launch, 1,500 hours of content will be available to users, with the large majority of content will be commissioned by the BBC. It has been confirmed however, that 10% of shows will be from other British broadcasters such as ITV's "Primeval" and Channel 4's "The Naked Chef". BBC.com's managing director, Luke Bradley-Jones, emphasized however that "[it] is not a catch-up service: this is a video-on-demand service. We will have content from the last month, but also the best from the catalogue stretching back 50 to 60 years." When talking about the content that would be available, he stated that users would be able to browse for specific shows or genres, with some being recommended by a team of dedicated editors for the global iPlayer app.

Those in the United States will have to wait a while longer, Mr Bradley-Jones provided an explanation as to why there's been a delay. He stated that the rights to media in the US were somewhat more complicated and means that the BBC have to "jump through a few more of those commercial and legal hoops." There were however hints as to how much it will cost for those in the states, with a figure of $7.99 being passed around, which is aimed to be competitive with Hulu and Netflix.