For those who use Bing, the colourful and often beautiful photos used on the search engine’s homepage are frequently cited as one of the reasons for choosing it over rival search engines. Users in the US have for some time enjoyed video on the Bing homepage, and from today, UK Bing users get to enjoy the video goodness too.

The very first Bing video homepage features a white-lined leaf frog in Manu National Park, Peru, and just as with the US video homepages, and with the static photo-based homepages, the familiar information ‘hot spots’ remain available to offer daily discovery of new facts and features. 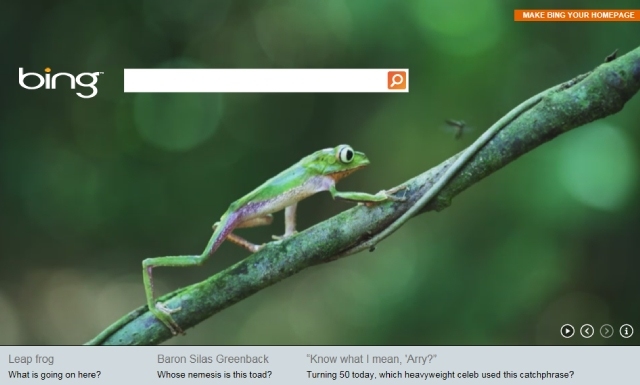 Accompanying today’s video, the link at the bottom left of the page introduces users to the new video homepage feature, while the second link refers to Baron Silas Greenback, the toad nemesis of the phenomenally popular (and supremely awesome) 1980s British cartoon super-spy, Danger Mouse.

You can actually join in a day of "frog-themed fun" on Bing UK’s Facebook page and Twitter - which sounds mildly disturbing, but which we're told will include silly frog-related jokes and a vote on which amphibian or reptile is the best. Wild.

You can see the video homepage for yourself at Bing UK right now, as long as you’re using a HTML5-enabled browser such as Google Chrome or Internet Explorer 9.


Update: As has been mentioned in the comments below, our friends down-under can also enjoy the video love at Bing Australia, which has launched its new video homepage today with the same frogtastic clip mentioned above, according to Making Windows Easy.