Conceivably Tech has noticed that Mozilla has quietly uploaded a Firefox 4 Beta 1 candidate build to its FTP server. No release notes or announcements have been made as of this post, but surely Mozilla will make the public aware of the final beta release when it's ready.

As discussed yesterday, Firefox 4 Beta 1 brings a whole new user interface to the browsers aging layout. Gone is the boring old grey (except in Windows XP, as seen above). Replacing it is an all new, modern, less intrusive, and glassier (Windows version) look. In the JavaScript department, the SunSpider benchmark shows solid improvement over Firefox 3.6.6. Oddly though, Firefox 4 still seems to lag far behind Chrome, IE9, Opera, and Safari. 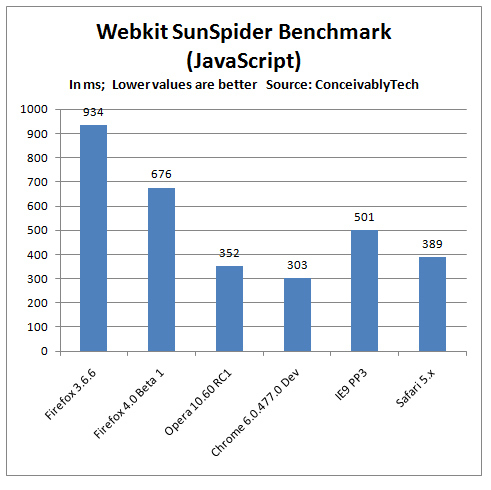 Keep in mind, this version is an early beta and should not be used as your primary browser. It's more stable than the alpha versions, but there's still plenty of work to be done before it's ready for mass consumption. Many add-ons that you probably use aren't yet compatible. According to a Mozilla developer, the team still plans to tweak their new JaegerMonkey JavaScript engine before release. Their goal is to hit at least 500 ms.