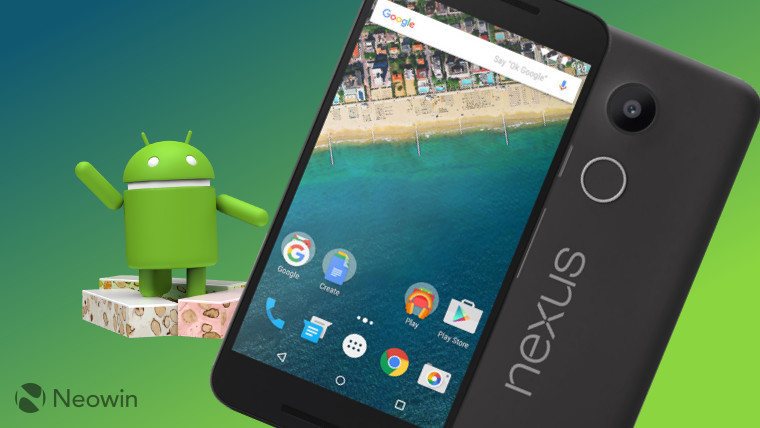 Last week, Google released its final Developer Preview of Android 7.1.1 Nougat, ahead of a planned rollout for the full update early next month. Now, it looks like we know when exactly that rollout will begin.

While most manufacturers haven't yet begun upgrading their devices to Android 7.0, Google's newest flagship phones - the Pixel and Pixel XL - are already shipping with Android 7.1 onboard. Android 7.1.1 is the slightly newer version that Google has been testing in its latest Developer Preview releases, and it's that version that will make its way to Nexus devices early next month.

According to Vodafone Australia, Android 7.1.1 will be released by Google on December 6, as an over-the-air update including the latest Android security patches; for the Nexus 6P, it will be around 650MB in size. The carrier said that the update "will be progressively rolled out" to its customers:

While those rollout plans apply specifically to Vodafone Australia, it's likely that other carriers will follow a similar distribution model, making the update available gradually to all eligible devices over a period of weeks. Google may well follow a similar pattern for its rollout to unlocked devices; it's common for manufacturers to push updates out in 'waves', rather than for all devices at the same time.

Along with the Nexus 6P, Android 7.1.1 will be made available to other Nexus devices, including the 5X, 6, 9 and Player, as well as the Pixel C tablet, and General Mobile's 4G handset. The December 6 release date was also revealed by Swiss tech journalist @Bluewall last week.

However, if you're wondering when Android 7.1.1 will be made available for other non-Nexus devices, your guess is as good as ours. Most manufacturers and carriers are, frankly, terrible at delivering updates to their devices in a reasonable amount of time; some are still rolling out Android 6.0 Marshmallow, over a year after that update was originally released.