The world has been closely following Google and its efforts with self-driving cars. Unsurprisingly, news of accidents and traffic infringements involving Google's autonomous vehicles have made the so-called "front page" including a collision with a bus at two miles an hour.. In the interests of transparency, Google publicly discloses all accidents involving its fleet and publishes a monthly report detailing all incidents.

However, data gathering is of limited value unless the gathered information can be used to prevent incidents from reoccurring or, at the very least, minimizing damage or injury. While collision avoidance would be ideal, there will likely be circumstances where a collision will be inevitable, some of which could involve pedestrians with varying levels of attentiveness and reflexes.

Along these lines, Google has patented an unusual concept of gluing pedestrians to the front of an offending vehicles should they be struck. The adhesive would prevent an unfortunate pedestrian from being bounced or flung off the vehicle from the initial impact or aggressive braking.

The itself patent states: 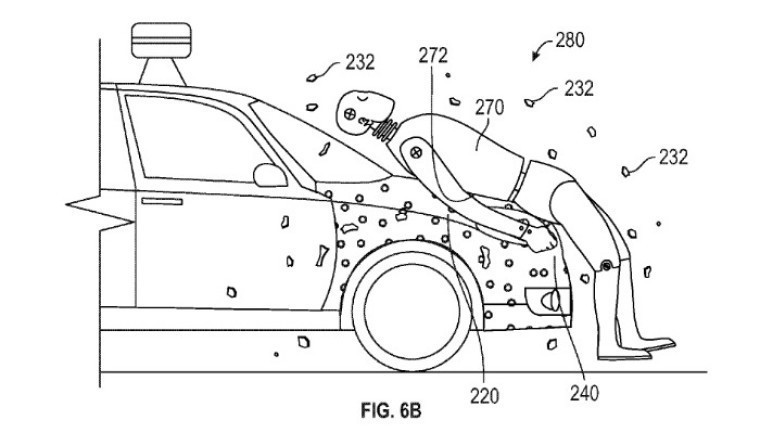 The adhesive-coated car bonnet would be protected by an eggshell-like material designed to break upon impact. Aside from the desired use of a 'releasable adhesive', the patent makes no mention of how someone would be 'unstuck' from the bonnet in its absence leaving us to wonder if people would have to peel themselves off similar to a band-aid or require the use of a liquid to dissolve the adhesive bond.

However, safety solutions in themselves can also pose their own drawbacks. For instance, air bags can help minimize injury in some situations but, in others, major injury or death may occur. Of course, we still use airbags because in the vast majority of cases they prevent harm. It's all a question of balance as Stanford School of Law professor and autonomous car expert Bryant Walker Smith explained:

If you had a pedestrian stuck on a car that then crashed into something else, that could be worse than if the pedestrian was thrown to the side or thrown over the car. It could also be better. It's very dependent on the chaos of the situation.

It is worth noting that, like all patents, some may make their way into real products while others won't make it any further than the original patent filing. However, given the vast advancements in car passenger safety over the decades it is certainly a positive for the car industry to turn more attention toward pedestrian safety.

Source: US Patent and Trademark Office via The Mercury News