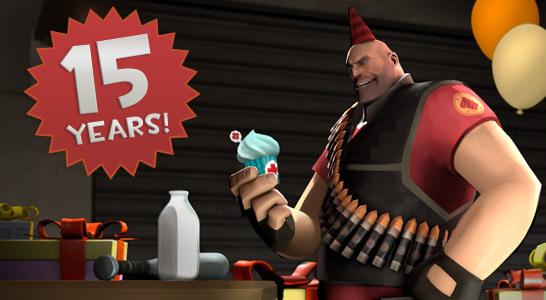 15 years ago this week, a team of mod authors released the first version of Team Fortress for id Software's first person shooter Quake. The mod was a team based multiplayer mode that involved several character classes and impressively designed levels and gameplay. This week, Valve is celebrating the 15th anniversary of the original Team Fortress with some special in-game items in the free-to-play stand alone sequel Team Fortress 2.

As announced on the Team Fortress 2 blog site, players will get a new birthday hat for the next 24 hours or so and a free noisemaker that can be used today but can only be used in the future on Team Fortress' birthday. Also, the game's ammo packs and health pack have been remodeled to look like cake and gifts.