Microsoft launched Windows 8 with Internet Explorer 10 included in the OS a few weeks ago and on Tuesday it debuted a version of the web browser for Windows 7 PCs. Microsoft has been trying to make the pitch that IE10 is faster that its competitors, and one third party company claims their information confirms Microsoft's assertions.

Not everyone has this opinion. One of them is Scierra, a developer who has created a HTML5-based game creation tool called Construct 2. In a post on their official blog, they claim IE10 is actually much slower than rivals like Google's Chrome and Mozilla's Firefox web browser when it comes to running some HTML5 games. 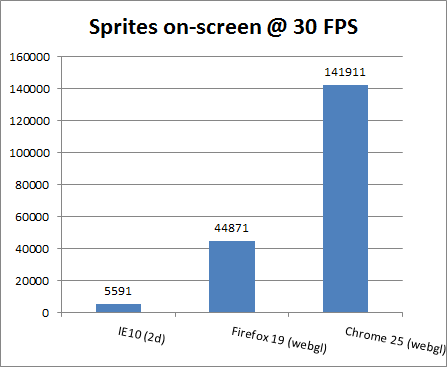 The blog says that because IE10 does not support the WebGL API, its HTML5 game performance suffers as a result. Running a WebGL game on identical PC software, Scirra claims that Firefox runs eight times faster that IE10 and Chrome runs 22 times faster than Microsoft's web browser. The blog adds, "As WebGL technology is refined and improved, IE is sorely losing out from the performance gains to be had."

Scirra also posted up data that shows IE10 running behind Chrome and Firefox in other tests they conducted, including particle effects and physics. While the developer feels that game creators can still make solid HTML5 games that will run on IE10, they question why the browser lacks a number of features that are already in Chrome and Firefox.

IE10 introduces only a small selection of features for games over IE9: requestAnimationFrame, offline support (AppCache), and touch events (in Microsoft's own custom form), and slightly improved performance over IE9. However other browsers have had these features for a long time now, and IE10's release does very little to catch up. It is still way behind Chrome and Firefox, and appears to be falling even further behind as time goes on: the improvement from IE9 to IE10 is much smaller than the strides Chrome and Firefox have taken in the same time.