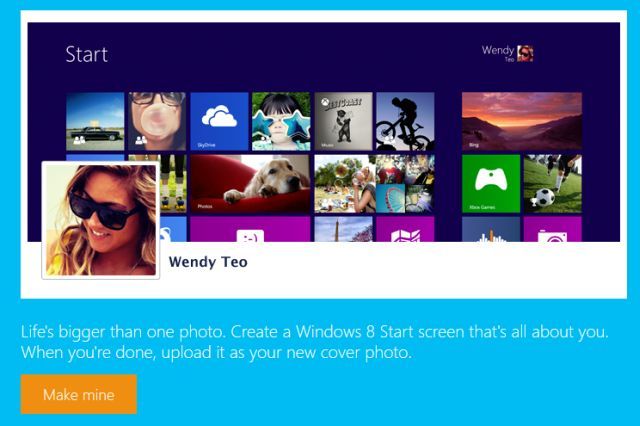 Facebook may not want to jump in and make an official app for Windows 8, but Microsoft certainly wants to help Facebook users put something Windows 8 related on their Facebook account. Today, the company announced that the Windows team has come forward with a way to show their Windows 8 love on their Facebook cover photo.

The Next at Microsoft blog reveals the details of the Windows 8 cover screen photo app, which can be accessed via Facebook. Basically, the app looks into your Facebook account and then loads up information on your friends, photos and "likes". It then generates an image from that data that looks like a Windows 8 Start screen which can be used for a new cover photo.

The blog adds, "It’s fast and easy and has a degree of customization so you can pick and choose which photos and apps appear in certain tiles." Obviously, this means the app will need your permission to access your Facebook information so if you are squeamish about offering that kind of info, you might want to stay away.

There's still no word on when, or even if, we will get some kind of official Facebook app for Windows 8. Microsoft might create its own app for the OS, as it did for Windows Phone.