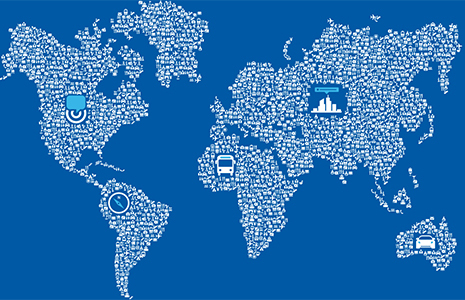 Ever since they bought NAVTEQ, Nokia has been focusing a lot of energy into their location/mapping platform. It was and still is touted as one of the key differentiators for Nokia Windows Phones. But Nokia isn’t done.

They announced yesterday the launch of their 2.0 mapping effort named HERE. HERE represents Nokia’s location platform that brings together their data, their apps such as Drive, Transport, Maps etc., info they have started collecting from users, and everything else Nokia has that relates to mapping technology.

What makes HERE important is that it isn’t restricted to Nokia’s own devices or even the Windows Phone ecosystem but rather it is a semi-open platform available for everyone to use. In Nokia’s own words “Here, [is] the world’s first location cloud that delivers a location platform, location content and location apps across any screen and any operating system”.

HERE will be available as an HTML5 app in Apple’s Appstore. The Android API has also been released and Nokia is working with Mozilla to bring the platform to Firefox OS. Not to mention that Amazon switched to Nokia’s location platform some time ago.

Nokia also announced they would be purchasing earthmine to further enhance their location services. Earthmine offers 3D street level imagery – think Google Streetview – so it won’t be long until we see this feature incorporated into the HERE platform. According to Nokia by next year they will have a list of 31 countries where such street level data is being collected automatically.

It is very clear that Nokia is serious about their location services and they will continue to invest in them as a key part of the “New Nokia” which is directly competing with the likes of Google and Apple.