Huawei's first-generation Watch debuted back in March 2015, with an elegant design that was clearly one of the more stylish smartwatches up until that point. In February of this year, the company revealed the Watch 2 and the Watch 2 Classic.

The Watch 2 offers a much sportier design than its predecessor, and it focuses more on fitness features, battery life, and offline music playback. If you're looking for more of an elegant design, look toward the Watch 2 Classic.

I realize that this is a rough note to start a review on, but I'm really not a fan of the design of the Huawei Watch 2. The body has a 1.8-inch diameter, and the screen is 1.2 inches, so if you're not good at math, a third of the diameter of the device is all bezel.

It's also half an inch thick, which feels massive. This seems to be a trend among Android Wear 2.0 smartwatches, as the LG Watch Sport is even thicker, but still, it doesn't make for a comfortable wearable. At least the LG has cellular connectivity, whereas the Watch 2 does not, at least in the United States (I was told that those in the US simply don't want to pay for the service in addition to their phones). 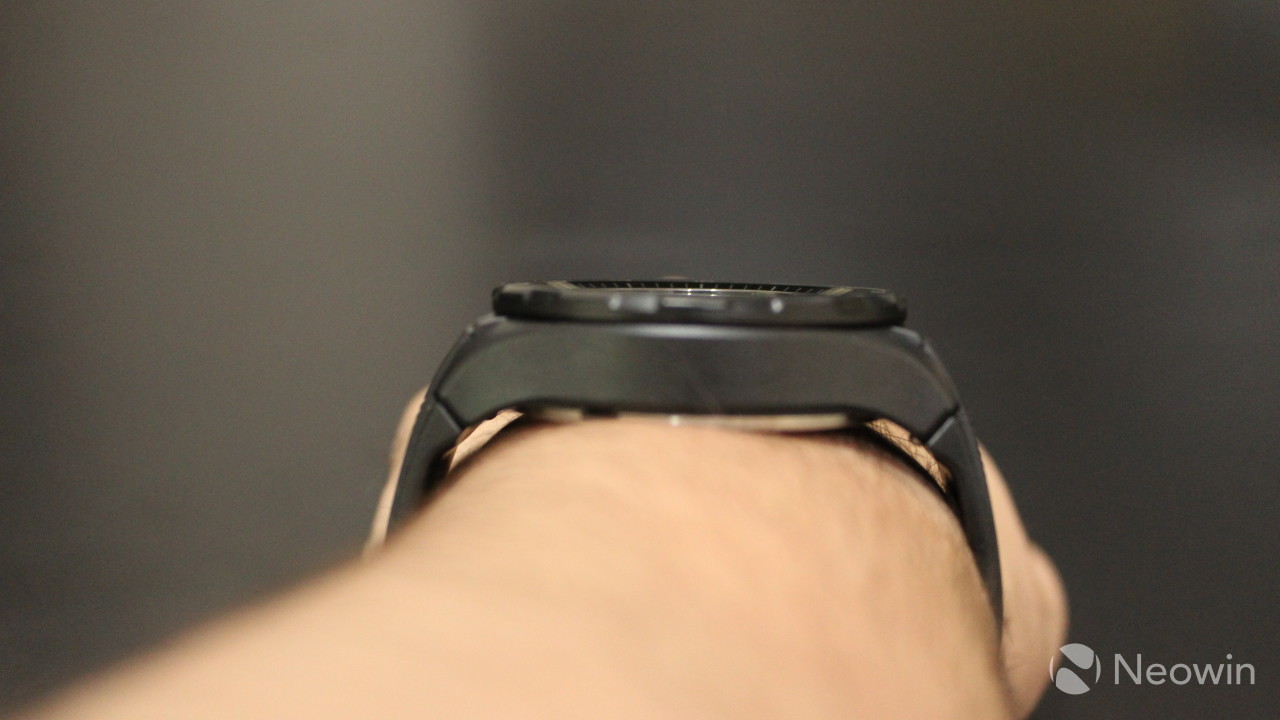 Other than the body, I like the rest of it. The "mixed plastics" make for a sturdy design when you're particularly active, something that other watches - such as the Apple Watch's Milanese Loop band - struggle with.

And if you don't like the band, you can always change it with any 20mm band (22mm on the Watch 2 Classic). There are little levers on Huawei's bands for easy removal. 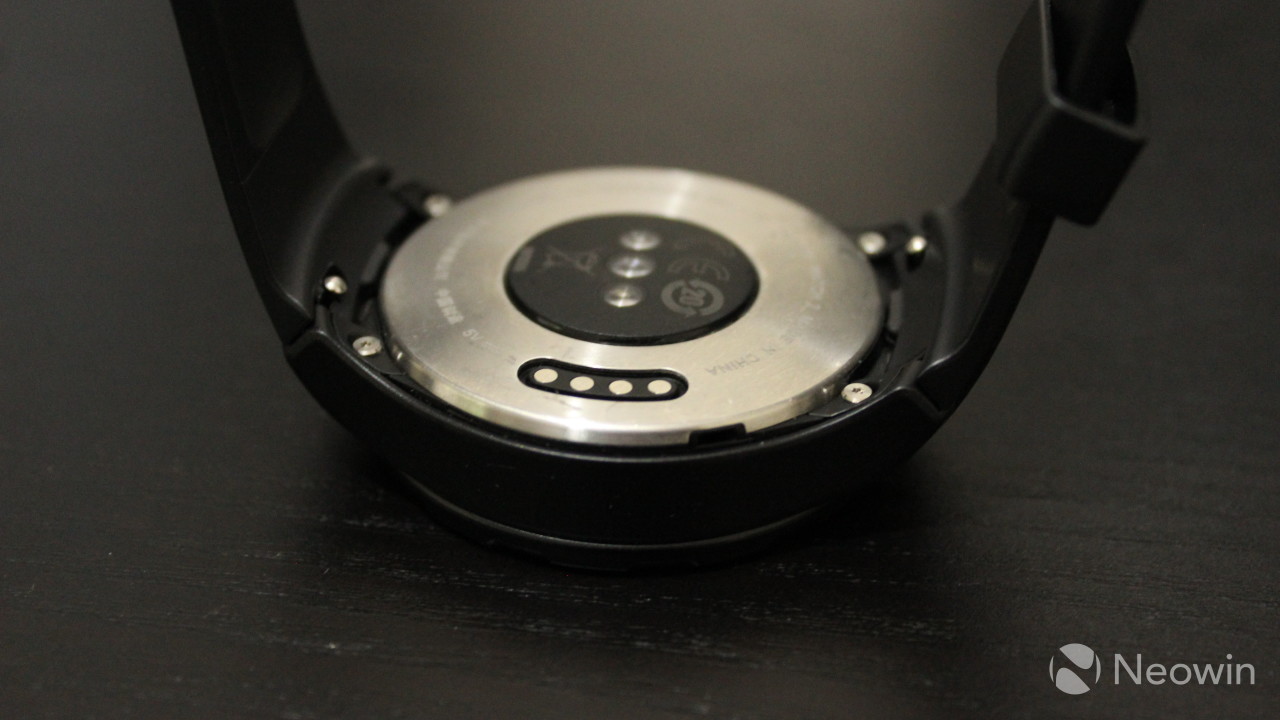 One thing that I do not care for is the charging mechanism, which is done via four pins on the bottom of the device. Other smartwatches, such as the LG Watch Sport, Apple Watch, and Moto 360 use wireless charging, and in my experience this is a better solution.

Furthermore, these pins become troublesome over time. You're bound to sweat underneath the device, the pins get dirty, and charging gets tricky. That's simply not an issue with wireless charging. 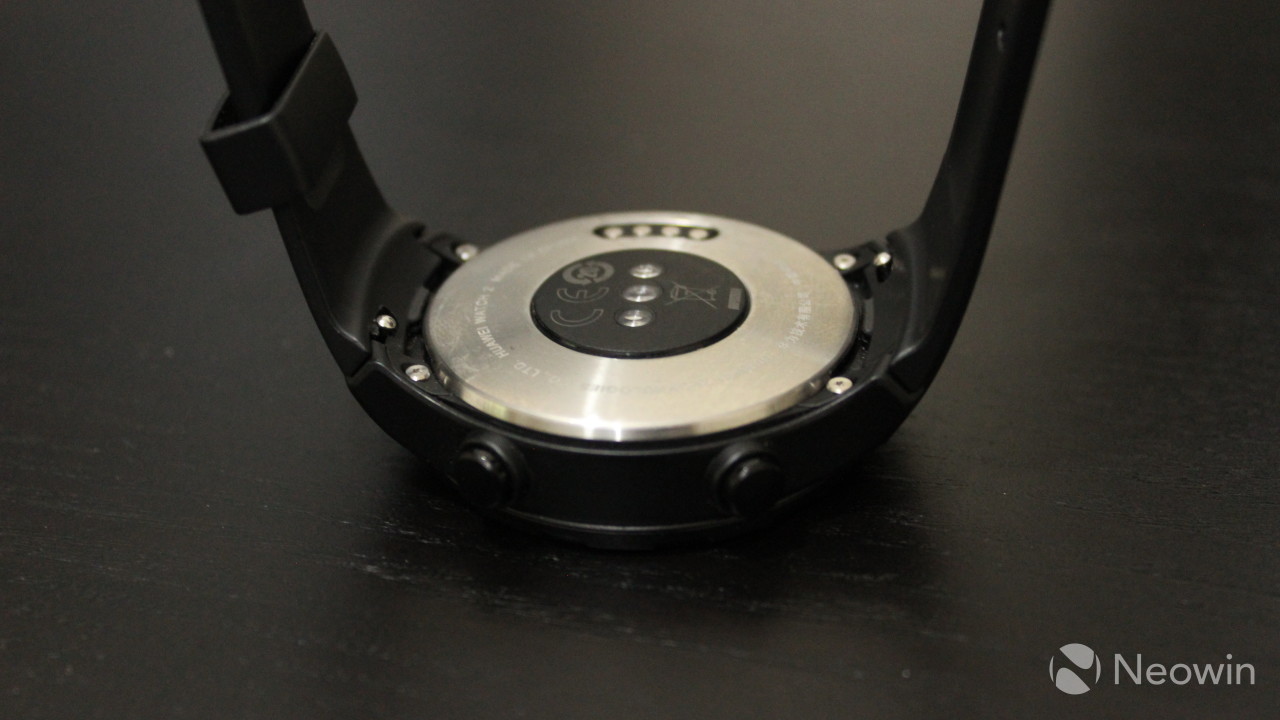 On one side of the device, there are two buttons. The top one toggles between the watch face and the app drawer, and the bottom one is used to access fitness tracking (single-click) and Android Pay (double-click).

The Watch 2 comes with a 1.2-inch 390x390 AMOLED display, which results in a 326ppi pixel density. Personally, I think it looks great, for a few reasons.

If 326ppi sounds familiar, it should. That's the pixel density that Apple considers to be Retina on its regular-size iPhones, and it works. I haven't noticed any pixelation on the Watch 2.

Also, OLED displays work great on a smartwatch. OLED, or organic light-emitting diode (active matrix, in this case), displays have the ability to only light up some pixels, so black is truly black. On an LCD, or liquid crystal display, the entire panel is backlit. OLED displays also tend to have more vibrant colors.

My biggest issue with the screen is that it really feels like a round peg in a square hole. Android Wear is meant for both round and rectangular displays, but in this case, it feels like a lot gets cut off. 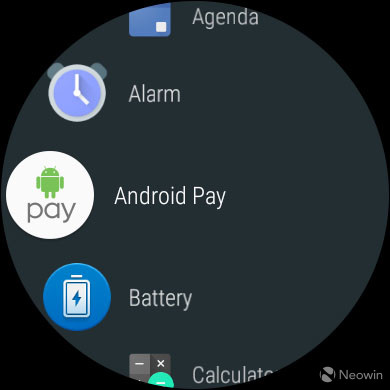 When Google launched Android Wear 1.0 and Apple launched watchOS, I really thought that Android was the one that got it right. It was based on Google Now, and it seemed focused on showing you what you want to see before you took any kind of action on it.

Android Wear 2.0 is a big departure from that, as it's much more app-centric. Swiping up from the bottom of the screen now brings up your notifications, rather than the mix of notifications and Google Now cards, and swiping down from the top will show quick settings.

Google Assistant is pretty useful though. You can use it to dictate texts, get directions, and more. Assistant can be activated by holding the top button, which is also the toggle for the app drawer.

Of course, none of my disappointments about the new version of Android Wear should really reflect upon the device itself. It's not like there are really a lot of alternatives out there; this is on Google. 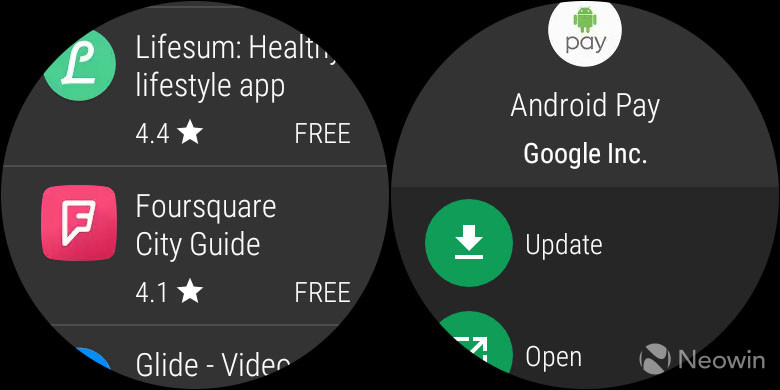 One thing that's pretty cool about Android Wear 2.0 is that you get the Google Play Store. As you can see from the image above, it doesn't always fit well into the 1.2-inch circular display, but it does add some versatility to the device.

And while I have my criticisms of the changes made to Android Wear in 2.0, the new features are really great. Standalone apps and support for better connectivity make the Watch 2 more of a standalone device, and this can make a big difference when it's paired with an iPhone, because while Android Wear has long supported both iOS and Android, pairing it with an iOS device caused it to have limited functionality.

In fact, you might still find the occasional limitations on iOS, but the good news is that even if it's paired with an iPhone, you can still access the Google Play Store from the device itself, and you can download apps straight to the Watch, so those limitations will be minimal.

Being that Huawei opted to leave LTE out of the US model of the Watch 2, streaming music is out of the question, at least while you're out exercising and might not want to have your phone on you. Android Wear 2.0 supports Wi-Fi though, so you can stream while you're connected that way, although I'm not sure how useful that is.

Of course, you can also pre-load it with plenty of music. You're going to want to use Google Play Music for this (or streaming, of course), unless you happen to know of another music service that will work as well on an Android watch. The good news is that Huawei worked with Google on this and you'll get a free 10 weeks of the service, rather than the standard one-month free trial. 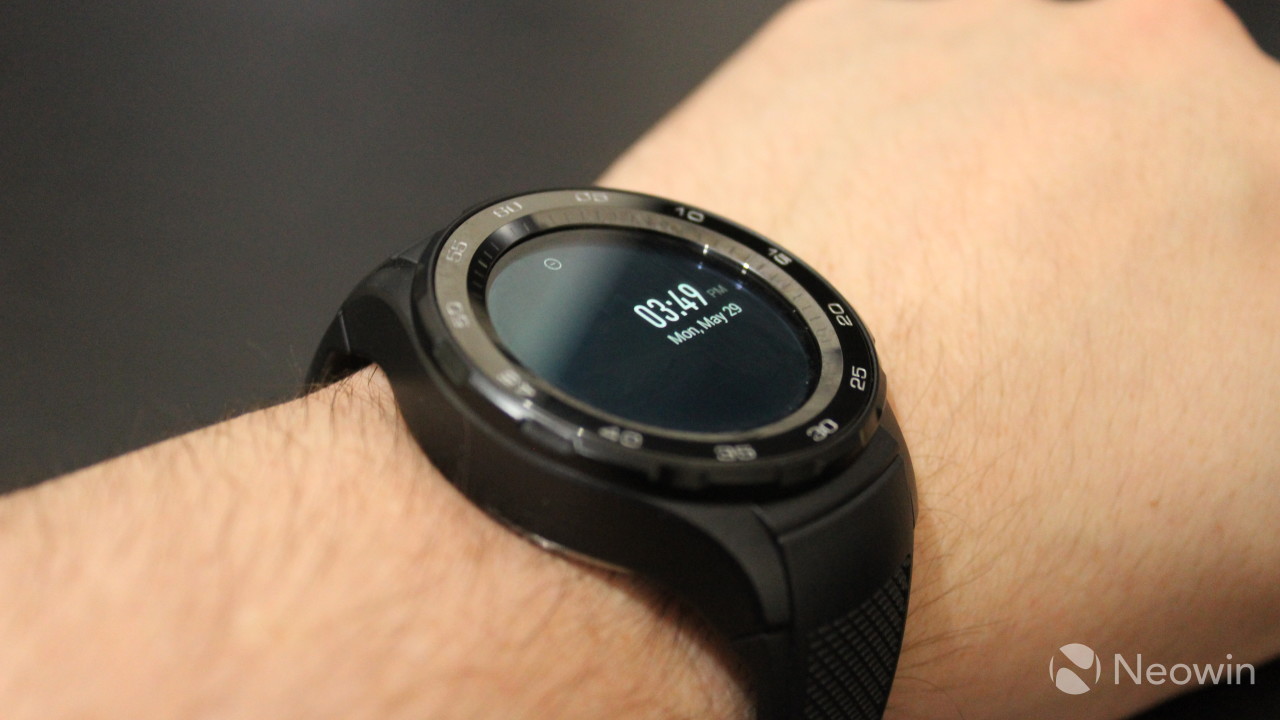 Pairing the Watch 2 with Bluetooth headphones is fairly straightforward (obviously, there is no 3.5mm headphone jack), and I didn't notice any connectivity issues. At one point, my headphones died and my music started playing from the Watch 2 itself, and I was surprised at how good the speakers sound. The volume won't exactly blow your door off of the hinges, but for something so small, it does pretty well.

Fitness tracking has long been one of the main value propositions to wearable technology. Huawei has put a lot of focus into this area with the Watch 2, from the hardware to the software; indeed, the sporty design is made to stay on your wrist during heavy activity and the large bezels seem like they'll withstand an impact.

The smartwatch is also IP68 water and dust resistant. This means that it can be submerged in up to 1.5 meters of water for up to 30 minutes. I'm not going to tell you that you should go and take the Watch 2 swimming, but you certainly don't have to worry if you get caught out in the rain.

As I mentioned above, there's a hardware button that's dedicated to fitness; pressing it will bring you to the screen seen above. Activity selections are run, fat-burning, cardio, walk, outdoor cycle, treadmill, indoor cycle, and other.

While exercising, it will track your location, heart rate, steps, calories, steps per minute, and distance. Once you're done, press the dedicated button again and you'll be prompted to end your workout.

I was really impressed with how much effort Huawei put into the fitness aspects of the Watch 2, as Huawei Health is pretty extensive, more so than its competition.

Huawei says that the Watch 2 can get up to two days of battery life, or 21 days if it's in watch mode. This is more or less accurate.

The Watch 2 does get pretty great battery life, and I don't think you'll ever struggle to get through a day. It does struggle to get to two days though, so you're probably going to want to charge it at night anyway. The additional battery life is useful though, as if you don't charge it at night, you can charge the Watch during the day at your leisure.

Naturally, as the usage of the Watch increases, battery life decreases. Things like GPS, running apps, and other activities will affect battery life.

The Huawei Watch 2 definitely has its pros and cons, and it's going to come down to what you really want from a smartwatch. 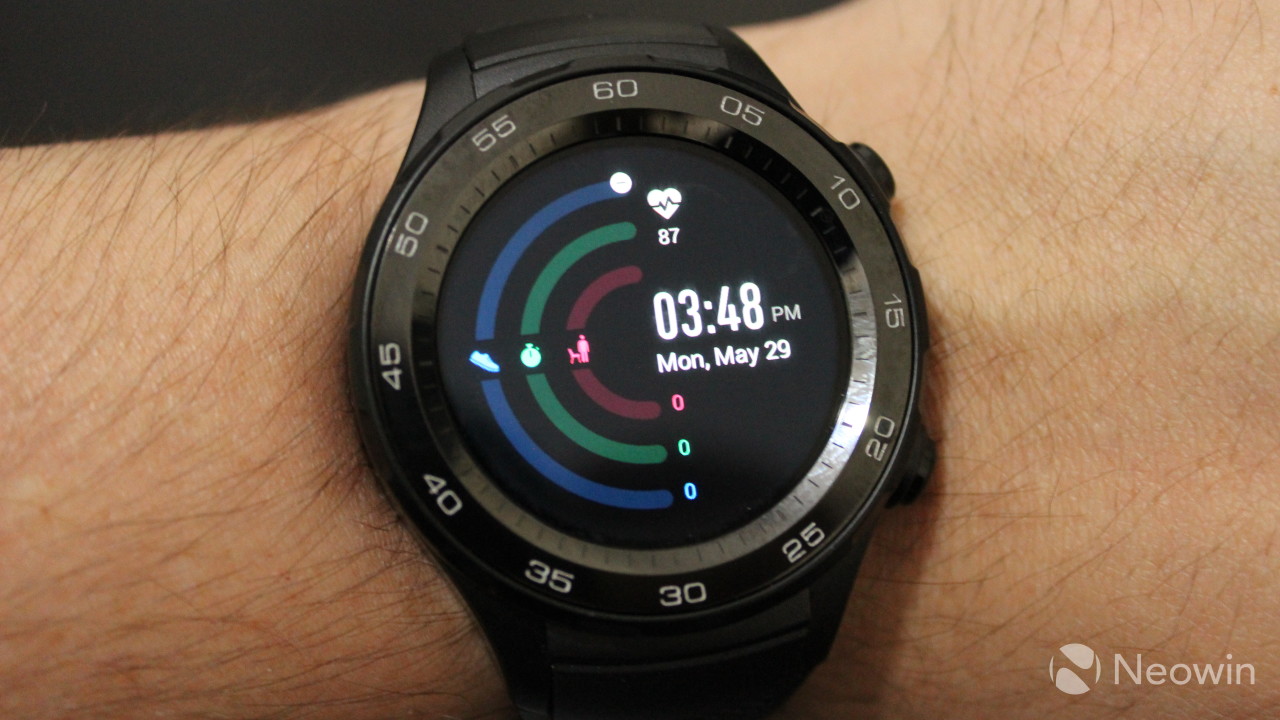 After all, a watch is a fashion accessory, and let's face it, the Watch 2 simply isn't sexy. The small display tends to cut off bits of the interface, and the body is really thick.

On the other hand, if you're really into fitness, I don't know of a smartwatch that does a better job than the Watch 2. Huawei Health does a really great job, and it should only get better with software updates.

To put it simply, the Watch 2 is a fantastic device, but it's not for everyone. If the design puts you off though, maybe you should have a look at the Watch 2 Classic.