Later today Microsoft will launch the much anticipated IE9 and with it will come with at least one small additional feature over the RC that was released a few weeks back. While there is no 100% confirmation yet that the build this was discovered on is the actual RTM, but if the rumors hold true, this will be the version released later today.

MSwin.me got its hands on build (9.0.8112.16421) and only discovered one change. This build brings a small addition of "Go to pinned sites" on the settings drop down menu. The reviewer states that unfortunately the link is not working, it is fathomed that when Microsoft does launch the RTM later today, that link will be live.

Other than that small update, there appears to be no other major changes to the platform. The reviewer states that this build still maintains the speed and stability of the RC and that the benchmarks from the RC do not differ from those of the final version.

We should note that it is possible this is an old build as we don't not have a current way to verify this information. But the reviewer is reliable with information in the past so we have reason to believe that this is accurate information.

You can read the full review here, but it is in Russian. 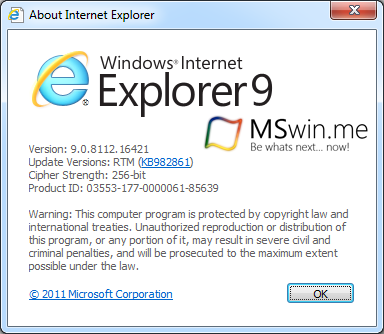