Depending on how you look at it, Internet Explorer is either getting off to a great start in 2012, or it's doing abysmally. Despite IE9's growing market share on PCs running Windows 7 and Microsoft's positive spin, IE as a whole continues to decline, while Chrome is growing rapidly – in fact, Computerworld reports that IE dropped to a whole new low in December via Net Applications.

Last November, Microsoft's Internet Explorer blog predicted that IE9 would be the number 1 browser on Windows 7 by the start of the new year, and it has indeed lived up to this prediction. When it made the prediction, Microsoft said that IE9 usage on Windows 7 had already surpassed all versions of Chrome and Firefox, and was second only to IE8.

Sometime in December, IE9 surpassed IE8 as the most used browser on Windows 7 PCs in the US, and was at about the same level worldwide. While this might seem like good news for Microsoft – they're often their biggest competitor – the other browser related news isn't so rosy.

IE as a whole, meaning every version of the venerable browser, isn't doing so well. Computerworld is predicting that it might fall below 50% by March, a major blow to the browser that once ruled the Internet. All versions of IE combined lost eight-tenths of a percentage point during December, ending what has been a miserable year for it with 51.9% of the browser market.

Eight-tenths of a percent might not sound like much, but when you consider the scale at which browsers are deployed, it is a larger number than it sounds. Chrome, which is eating up most of IE's lost market share, grew by nine-tenths of a percentage point, now controlling 19.1% of the market, and is projected to hit 20% by February. 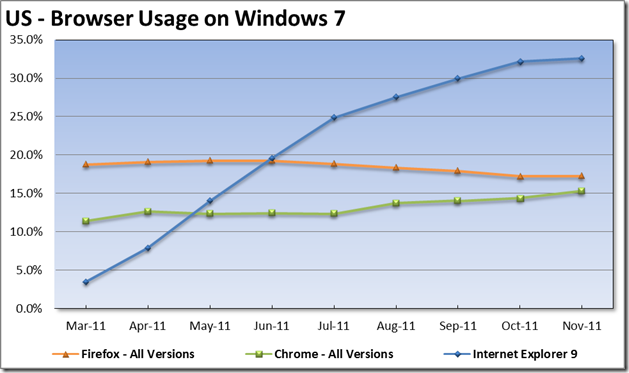 Even though Microsoft's own coverage makes it look like IE is doing great in the market, they have to be worried about what is happening. There's no shortage of people out there who think they know how to stop the decline, from more rapid update cycles, an increased mobile presence, or something altogether more radical, but Microsoft needs to do something soon.

Although IE is a part of the Windows operating system, its loss of market share is of far more concern to Microsoft than those of other bundled applications (Windows Media Player, WordPad, and so on). Those applications are essential features to the OS, however if users choose to use competing products, Microsoft suffers no losses, other than the possibility that said users could be drawn into a rival's ecosystem. With browsers, it's a different story.

In the end, 2012 is going to be a big year for IE, no matter how you look at it. Whether it's going to be a good one or a bad one, though, remains to be seen. It's going to come down to a combination of determining factors to see how things play out: Windows 8 and IE10, Windows Phone 7 and the mobile market, and the performance of rival browsers will all play into this epic struggle.