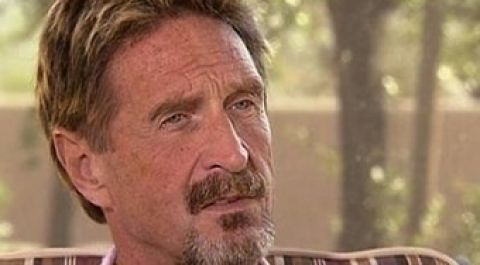 You don't hear about murder in the tech industry too often, except when Product X "slaughters Product Y" in a performance benchmark. Yet this isn't performance related, being much more sinister. Antivirus kingpin John McAfee is wanted for murder by Belize police.

Believe it or not, the name behind the McAfee antivirus software has been connected with the shooting of Gregory Faull in San Pedro Town on the exotically-named Ambergris Caye island. Faull was a builder, according to the populace, and well-liked in the community. McAfee and Faull were at loggerheads in the past, and Faull complained of "roguish behavior" and some activity involving guns. The official police statement reads as follows:

On Sunday the 11th November, 2012 at 8:00am acting upon information received, San Pedro Police visited 5 ¾ miles North of San Pedro Town where they saw 52 year old U.S National Mr. GREGORY VIANT FAULL, of the said address, lying face up in a pool of blood with an apparent gunshot wound on the upper rear part of his head apparently dead. Initial investigation revealed that on the said date at 7:20am LUARA TUN, 39years, Belizean Housekeeper of Boca Del Rio Area, San Pedro Town went to the house of Mr. Faull to do her daily chores when she saw him laying inside of the hall motionless, Faull was last seen alive around 10:00pm on 10.11.12 and he lived alone. No signs of forced entry was seen, A (1) laptop computer brand and serial number unknown and (1) I-Phone was discovered missing. The body was found in the hall of the upper flat of the house. A single luger brand 9 mm expended shells was found at the first stairs leading up to the upper flat of the building. The body of Faull was taken to KHMH Morgue where it awaits a Post Mortem Examination. Police have not established a motive so far but are following several leads.

McAfee's activities have become a little more than just crazy lately, with the man having admitted his connections to some of Belize's most notorious criminal elements. Other stories seem to indicate that he was also trying to refine bath salts.

Essentially, John McAfee has been acting strangely for quite some time now, and it is possible that the erratic behavior of McAfee manifested itself in an action that he could be brought to justice for. Belize is known to carry the death penalty for crimes like these, although nobody has been executed since 1985.