Lenovo's ThinkPad E490 isn't something to write home about; it wasn't meant to be. It's aimed at small and medium sized businesses, along with the educational market. This PC is meant to provide the core ThinkPad features, but at a lower price point.

The E490 starts at just $656.10 with Lenovo's instant savings. I say that because Lenovo.com prices often fluctuate, and they're never full-price. You can spec it out though with up to a Core i7, 32GB RAM, and more.

Made out of aluminum and plastic, it comes in other silver or black. Lenovo sent me a black one, like every ThinkPad I've ever reviewed. It's actually a crazy streak that I'm on. Most ThinkPads come in those two colors, and after dozens of reviews, I've still only held a black one.

It has the general look and feel of a ThinkPad clamshell, with its flat sides, all-black body, and the silver ThinkPad logo on the top-left side of the lid. The silver logo can actually be peeled off on this one, as it's not stamped into the cover. It's just a foil sticker.

It comes in at 0.78 inches thick and it weighs in at 3.87 pounds. Obviously, it's not the thinnest and lightest laptop around. While anyone can buy this, it really does feel more like something that you'd pass out to employees at a business. 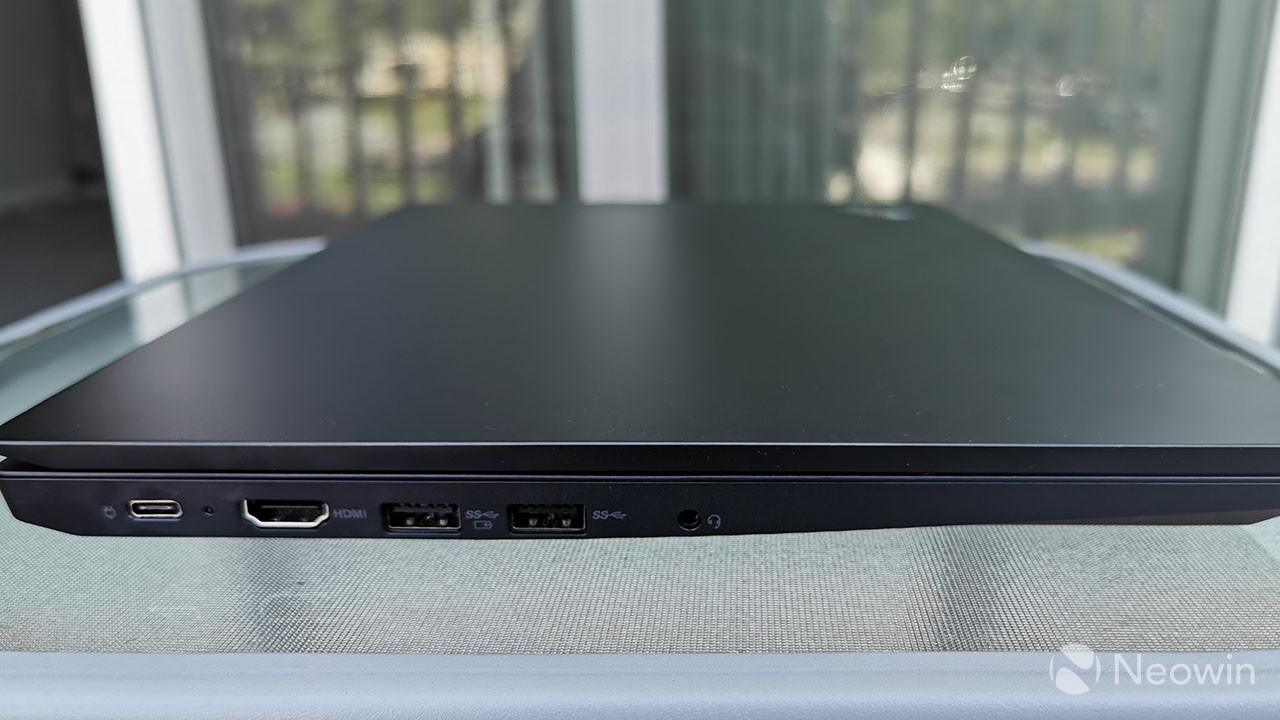 It has a nice selection of ports though, although it's a strange selection. On the left side, there's a single USB 3.1 Gen 2 Type-C port, along with two USB 3.1 Gen 1 Type-A ports, HDMI 1.4b, and a 3.5mm combo audio jack. It's a bit strange to see only one USB Type-C port though. Every other modern ThinkPad I've seen has two, one of which can be used for mechanical docking with Lenovo's docking stations. There's no mechanical docking happening here. 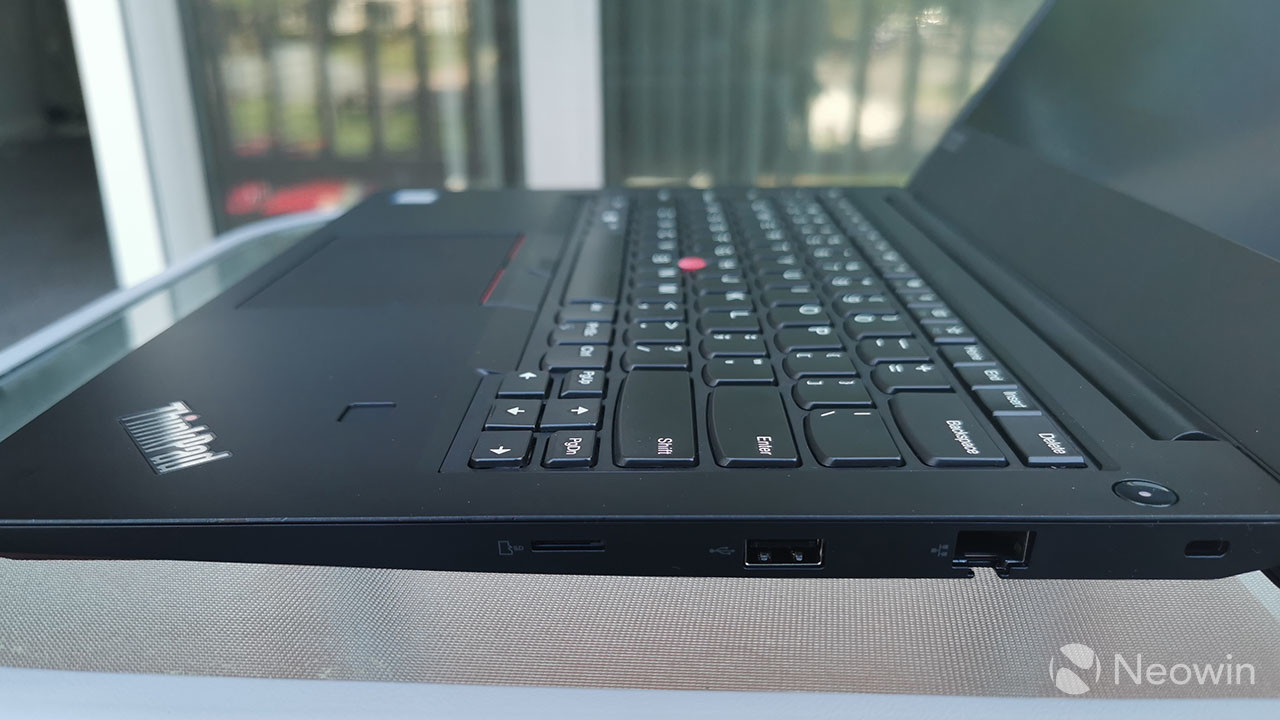 On the right side, there's another USB Type-A port, although that one is USB 2.0, along with Ethernet and a slot for micro-SD cards. As always, I'm completely against USB 2.0 ports. I don't think it should be up to the user to know to use the ports on the left side of the PC. I'd rather see this device just have two USB Type-A ports, rather than have three and one of them be USB 2.0.

Another thing that's worth noting is that like all ThinkPads, the E490 passes four MIL-STD-810G tests. That means that it's been tested against sand, dust, extreme temperatures, humidity, high altitudes, vibrations, and more.

Neither option supports touch, and the quality is about what you'd expect at this price point. The colors do look a bit washed out, something that's pretty common in anti-glare screens. Also, it's not all that bright, so it can be a bit hard to work in direct sunlight. 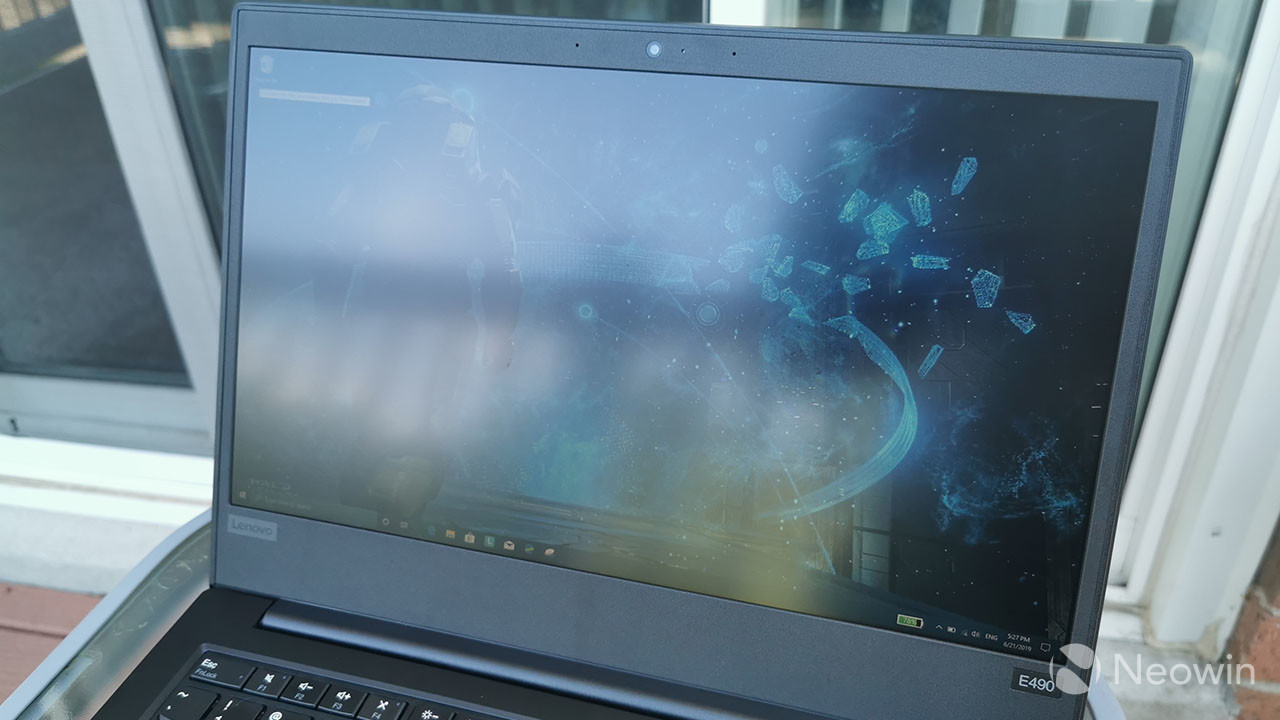 One thing I'll give Lenovo credit for is that the screen has a good viewing angle. Looking in from the side, it's easy to see what's on the screen. Once you start looking at PCs around that $600-$700 price point, that's one quality that quickly goes away.

I also give Lenovo credit for providing narrow bezels, but the ThinkPad E490 has a massive chin. It gives the chassis a really tall aspect ratio. The top bezel isn't particularly large, packing the PC's webcam. There's no IR camera for Windows Hello, nor is that an option. If you want biometric authentication, you'll have to use the fingerprint sensor.

One of the things that I've always praised ThinkPads for is their keyboards. While HP seriously upped its game with this year's EliteBook 1000 laptops, those are in the premium range. Lenovo offers a great keyboard in ThinkPads at all price points. 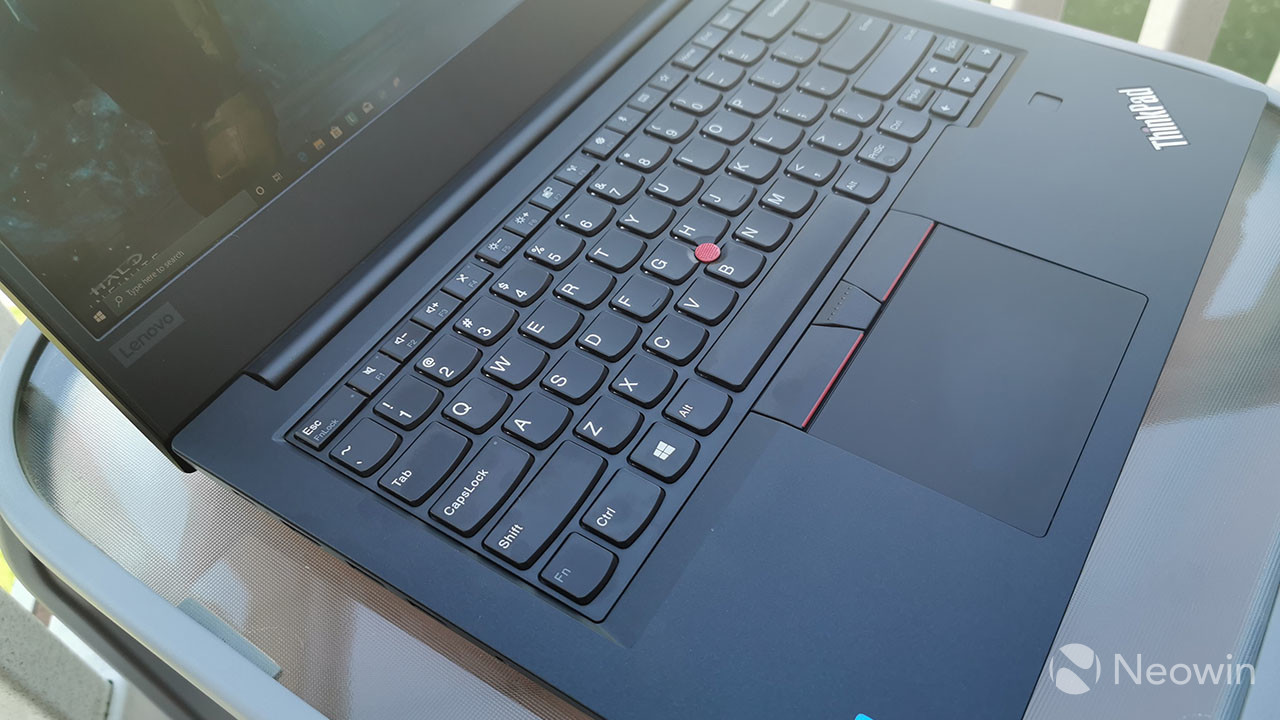 But that doesn't mean that they're all equal. I'd actually say that this is probably the worst ThinkPad keyboard that I've used, and it's still pretty great. What's great about it is that it's accurate with a comfortable resistance, and the keys have the depth that you'd expect from a ThinkPad clamshell.

The keyboard is certainly not as quiet as ones that I've used on more expensive ThinkPads. They do make more of a clacking noise when you use them, and the keys aren't as sturdy. But still, I don't know where you'd find a better typing experience at this price point. 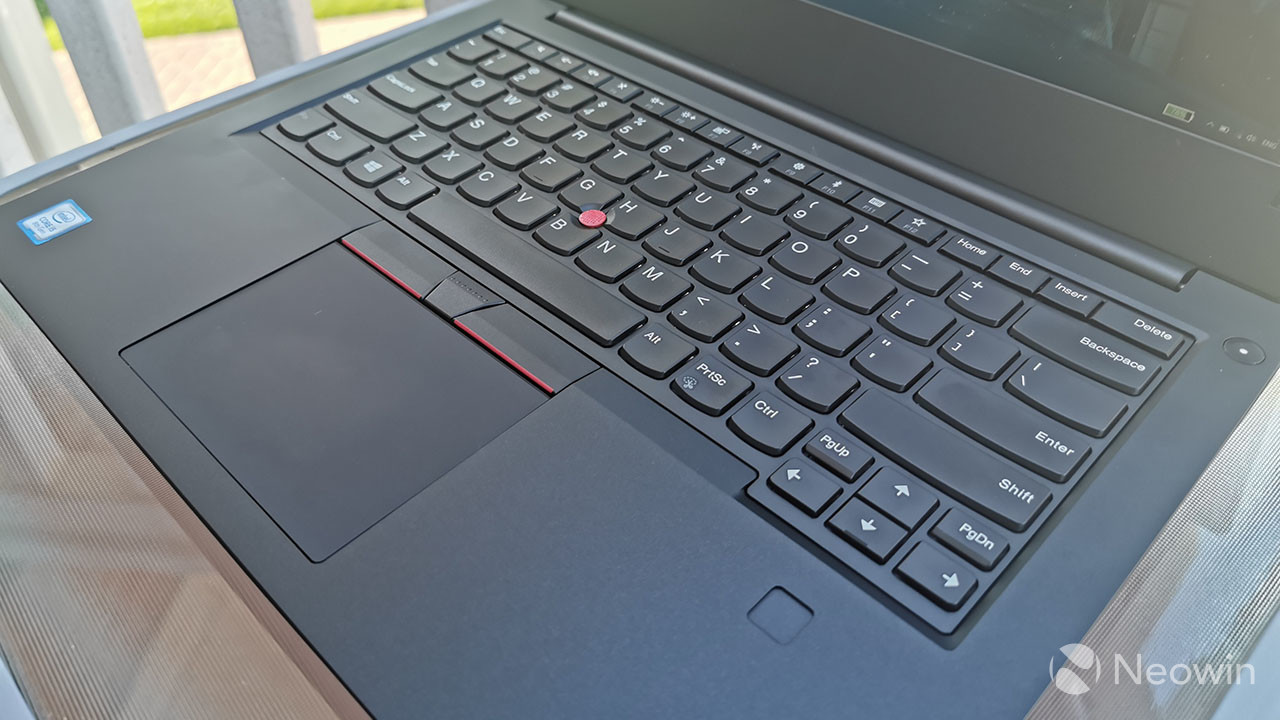 But along with the quality of the keyboard, those core ThinkPad features that Lenovo is bringing in at this price include the TrackPoint, which sits between the G, H, and B keys. You can use this to control the pointer, and interact with it by using the physical buttons above the clickable trackpad.

I love trackpads that have physical buttons. It makes tasks like dragging and dropping so much easier. Even if you don't like the TrackPoint, the buttons can still come in handy when used with the trackpad.

Below the keyboard is a fingerprint sensor as well, which is pretty standard for ThinkPads. In fact, ThinkPads have been using fingerprint sensors for years, long before Windows Hello was even a thing. I didn't have any problem with it, as I've complained about the quality of the sensors before.

As far as performance goes though, it's fine. It's exactly what you'd expect from a Whiskey Lake Core i5, which is a 15W quad-core CPU. There's no dedicated GPU, so you'll want to use this mainly for productivity-related tasks. It can handle more than that though if you really push it. It's also got a big chassis, which means that it won't be held back from the thermal restrictions that you'll get in thin and light PCs. 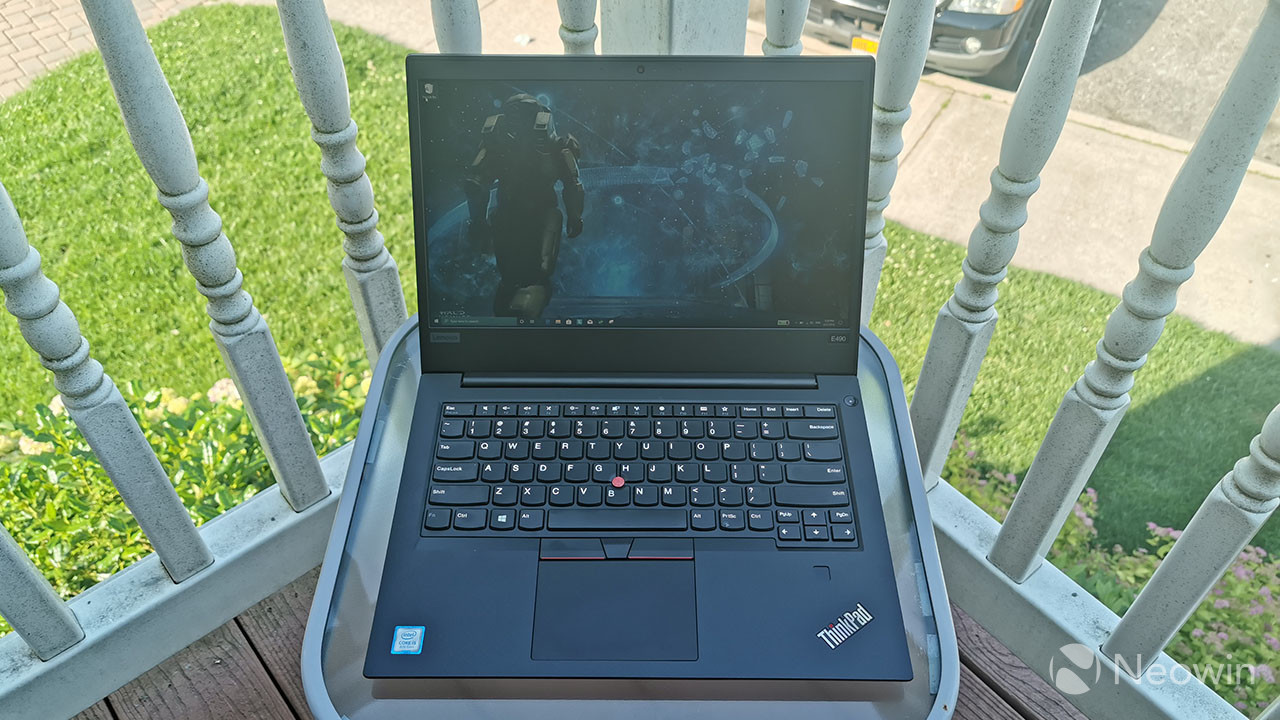 I didn't have any problem with the battery lasting through a full workday either. That's one of the nice things about reviewing a PC that's got a 45Wh battery, a 1080p screen, and a 15W Core i5. Eight hours of battery life isn't really a problem. You won't be able to go too far beyond that though.

It supports Lenovo's Rapid Charge technology though, which should get you up to 80% in an hour. Remember that there's only one USB Type-C port though, and that's your charging port. If you're using that port for something else, you won't be able to charge it.

The ThinkPad E490 does pretty well, considering that this model only has a Core i5. It's worth noting that the base model has a Core i3-8145U, and I never recommend a Core i3. The scores here would be lower. Next up is the Creative test, which checks more GPU-intensive tasks like video editing and mainstream gaming.

To put this in perspective, a Core i7 would probably come in beating about 90% of other results. You're still in pretty good shape with an i5. But don't get an i3. Never get an i3.

I also ran PCMark 10 for its all-in-one test, mainly for those that like to keep score. 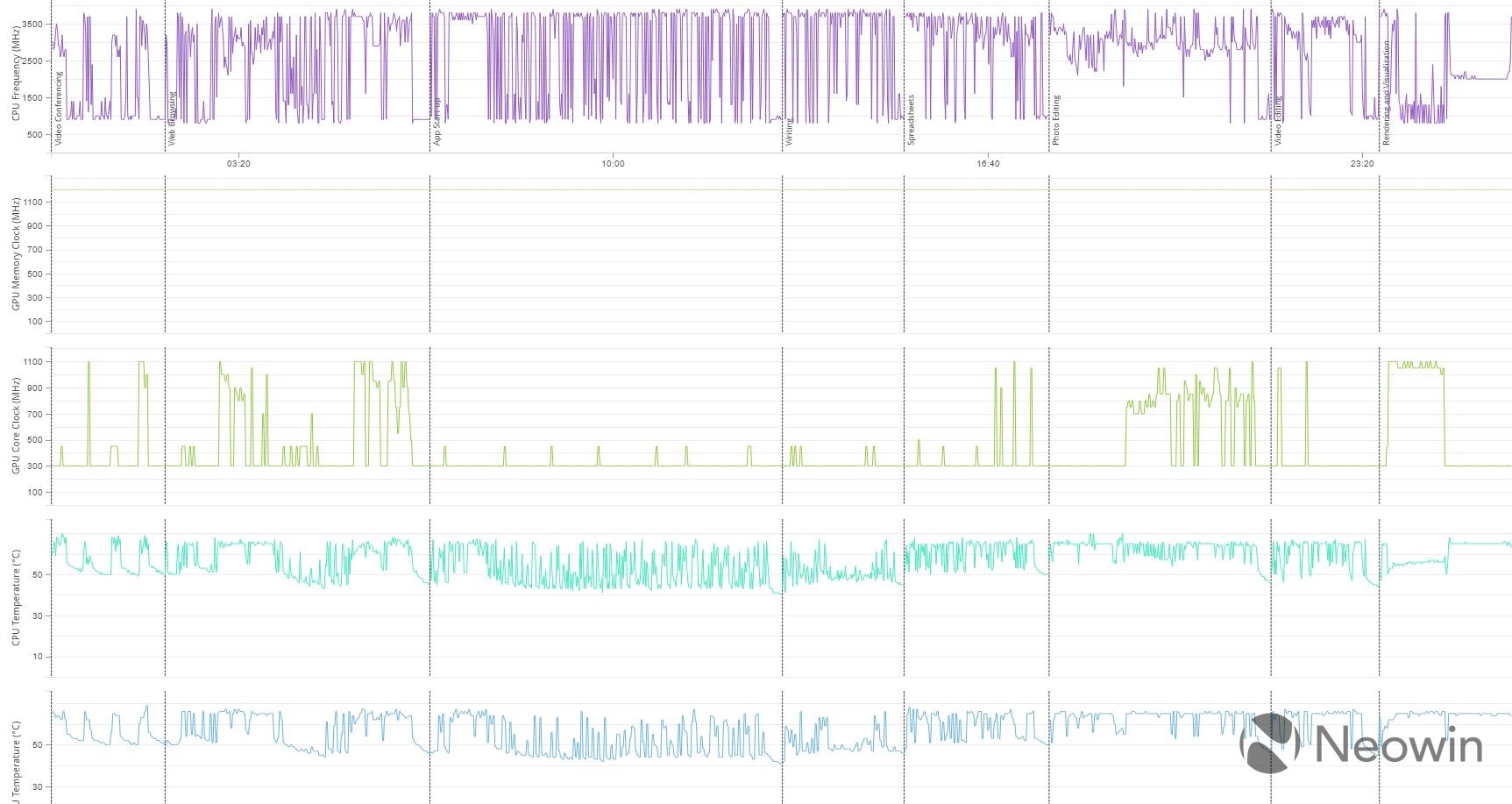 The Lenovo ThinkPad E490 is perfectly average, packing in the core features that make a ThinkPad a ThinkPad and shedding anything else. It has the all-black body, the solid build quality, a good keyboard, and of course, a TrackPoint. 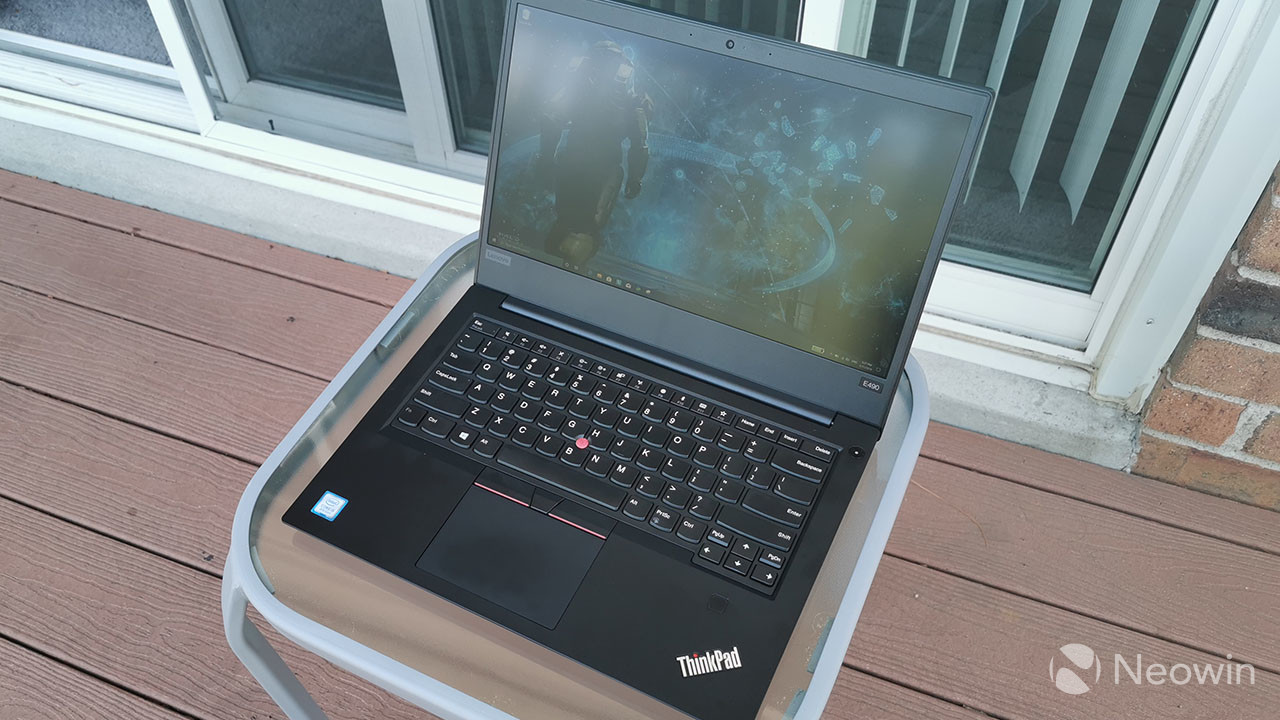 What you'll want to be aware of when buying this is that it's pretty bare-bones. As I just said, it sheds everything else. There's no Thunderbolt 3 here, and no mechanical docking. It also has a USB 2.0 port, which I'm completely against.

Probably the best thing about the E490 though is that it's a great PC to hand out to employees. For example, if you're the manager in a company that needs to buy a dozen PCs, spending over a thousand dollars per unit might be unreasonable. The ThinkPad E490 will definitely get the job done.

It has the standard solid build quality too, passing 12 MIL-STD-810G tests. That means fewer breaks, and less cost in fixing PCs.

Obviously, the base model might not cut the mustard, with its Core i3 configuration. You might want to upgrade to a Core i5 and the Full HD screen. 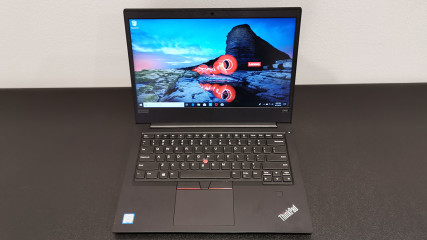 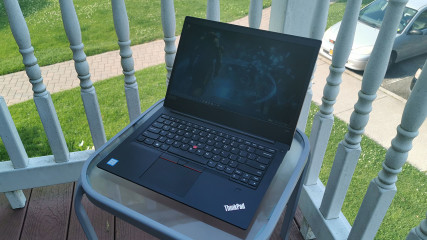 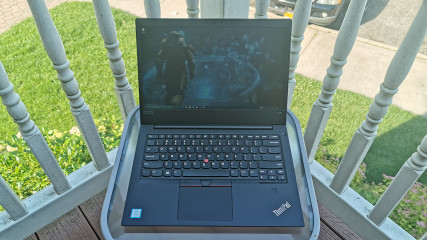 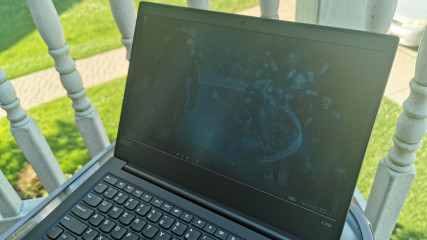 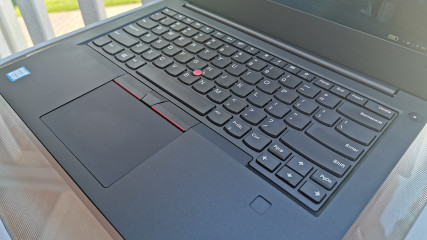 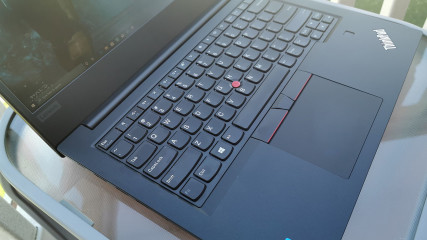 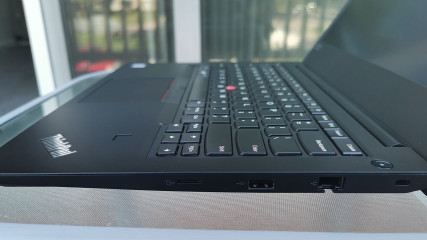 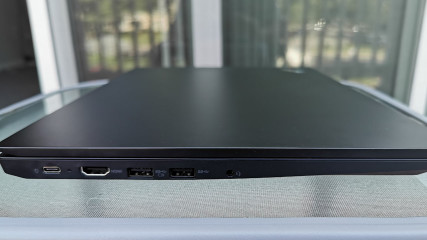 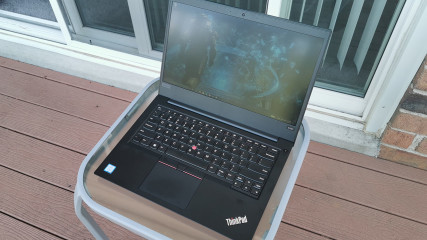 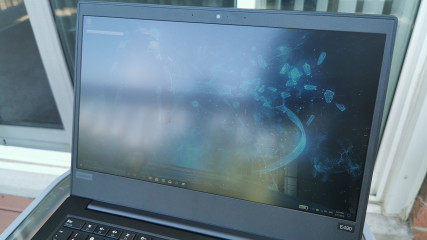