Whilst we don't agree with people picking up party packs and then selling them, this story is rather unique.

Neowin member Matthew Elder decided to list his Windows 7 party pack on eBay and profit from a freeby by selling it on. Initially his auction was taken down after a claim by Microsoft for "unauthorized distribution of Microsoft Software". Elder wasn't happy with the decision and fired off a reply to the rights holder, Microsoft's NetSafe team - he received the following reply:

"It appears that this auction was reported to eBay because the software that was being offered is not licensed for retail distribution. Microsoft distributes software in a variety of formats, each of which are licensed for specific uses and have specific transfer requirements. Many software components are limited from redistribution through "Not For Resale" or "Not For Retail Or OEM Distribution" licensing. These components are generally distributed for promotional purposes, and are licensed for demonstration, testing, or evaluation only. They are not complete, retail software packages, and are therefore not authorized for retail transactions such as eBay auctions."

Still unhappy with the response, Elder sent the following:

"Your company's stance on that seems to go against the ruling that was issued by a federal judge last year in a case about resale of promo CD's ( https://www.eff.org/files/filenode/umg_v_au...V03106SJO-O.pdf ). Surely there would be no legal difference between a promo CD and promo software? And are you telling me that there is some difference (other than the special packaging) between the copies of Windows 7 Ultimate that were given to the House Party hosts and the copies that will be sold at retail? Your company has already had to settle a lawsuit when you tried to sue someone reselling Academic copies of Windows XP and Office (https://en.wikipedia.org/wiki/Microsoft_Corp_v._Zamos). How many more times does this type of thing have to go to court before your company understands the concept of the First Sale Doctrine? You CANNOT restrict someone from reselling something that they legally obtained from you. End of story. While Microsoft may be the "800lb. gorilla" of the software industry, you cannot and DO NOT make the law, nor are you entitled to bully consumers by trying to impose non-existent laws on them.

I'd really like to hear your thoughts on the court cases I mentioned above, and why your company feels that they are still in a legal position to request the end of auctions for NFR copies of software."

Clearly the folks at Microsoft's NetSafe team took notice as they replied, allowing Elder to list his auction once again:

We are in receipt of the additional information you provided regarding eBay auction #160368269963, in which you were offering Windows 7 Ultimate Signature Edition Party Pack. We have contacted eBay and notified them that Microsoft does not object to the reinstatement of your auction pending its further review of this matter.

The listing of free copies of Windows 7 from party packs wasn't the original intention of Microsoft's marketing team nor is it in the spirit of the concept of the parties. Never fear though, Neowin, along with some other great Microsoft writers and bloggers, is holding a Windows 7 party in New York on October 22. For your chance to win a copy of Windows 7 and other goodies, check out all the information here. 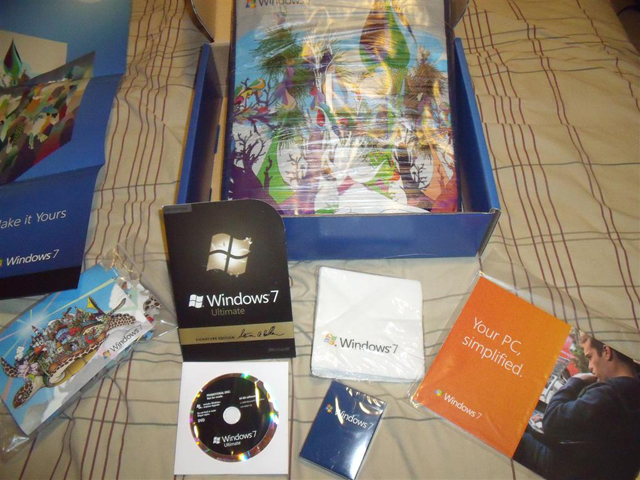