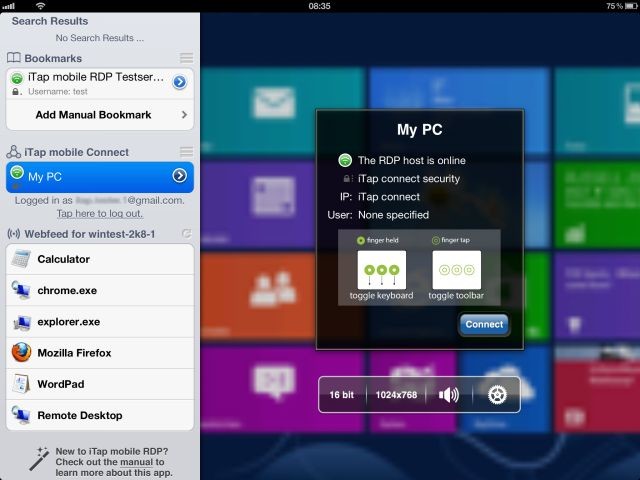 A few days ago, Microsoft announced that it would be releasing Remote Desktop apps for iOS and Android platforms later this month for Windows Server 2012 R2. Microsoft didn't promote this launch; in fact it buried the announcement inside a press release where it talked mostly about cloud-based enterprise solutions.

Now it turns out that Microsoft is getting some help in releasing those iOS and Android Remote Desktop apps, along with a new Mac OS X program. The Austrian-based company HLW Software, which has released its own iTap Remote Desktop software for Windows for iOS, Android and Mac platforms, announced earlier this week that it was discontinuing those apps for all three operating systems.

The iTap web site stated that it will continue to support the apps have have already been downloaded but it has now removed them from their respective download stores and they will no longer be updated. It added, "We recommend you evaluate the new Microsoft Remote Desktop app available in app stores later this month."

Neowin sent an email to Microsoft for comment and got a response from an official spokesperson:

Microsoft acquired specific IP assets from HLW Software Development GmbH (HLW). This was used as a base for development, on top of which we implemented, amongst other things: RDP 8, RemoteApp support, multitouch, and all new UI.

Microsoft's statement did not disclose how much money it paid for the assets from HLW Software. As we mentioned before, Microsoft has not yet announced plans for a Windows Phone Remote Desktop for Windows Server 2012 R2. We contacted Microsoft earlier this week and received this reply: "We are always looking at additional services based on what we hear from our customers. We have nothing to share at this time."