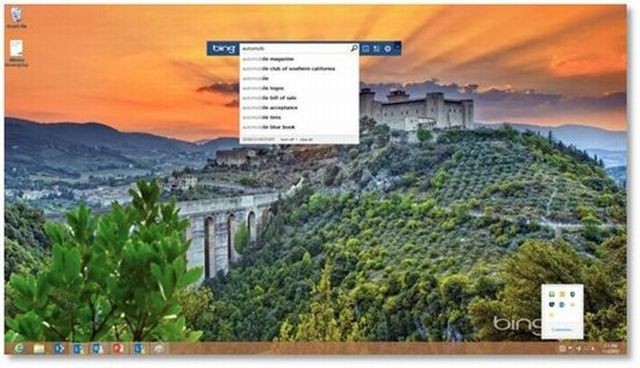 Microsoft first launched its stand alone Bing Desktop application in April 2012 as a way for Windows desktop users to search Bing directly without having to go to the website, along with a way to automatically download the image of the day on the Bing.com front page as their desktop wallpaper. A few months ago, version 1.1 was released, adding in Windows 8 support and more new features.

This week, Microsoft quietly updated the free Bing Desktop to version 1.2. The major new feature is the ability to log onto Facebook and see Facebook content in the application. This is yet another collaboration between Microsoft's Bing team and the folks at Facebook that has included Bing being used as web-based search engine for Facebook's own Graph Search service.

The other new feature in Bing Desktop 1.2 is that it now lets users minimize the application as either a toolbar or taskbar, or they can reduce it down to the desktop system tray. This should be useful for the people who don't really care about seeing the application itself but still want to use it to change their desktop wallpaper to the daily Bing image.