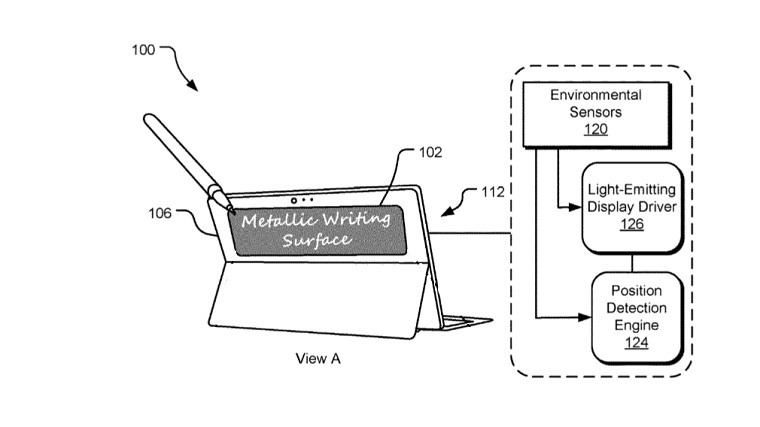 Microsoft recently obtained a patent from the U.S. Patent and Trademark Office showcasing a Surface-like device with a display on the back. The company patents a lot of things, and recently we've seen it come up with some interesting ideas for devices with multiple displays, but this is very different from the rumored Andromeda device.

The patent is for a 'reflective display' which can either be the primary or secondary display of a given device. In the included drawings, Microsoft shows what looks to be a Surface tablet with the keyboard attached, and on the back, a portion of the otherwise empty space has a screen with the text "Metallic Writing Surface".

The reflective display features a number of layers which give the illusion that the display area looks the same as the metallic surface on the back of the device, but it also allows for light to selectively be emitted from the display. One of the possible uses for this includes sensing touch input using a finger or pen and then lighting up the underlying pixels, which could be used for a rudimentary form of digital inking.

While the technology is interesting, more often than not, patents don't lead to an actual product being released in the near future, and the usefulness of this secondary display is somewhat questionable right now. Besides, Microsoft just recently updated its Surface line of devices, so it'll probably be a while before the company even has the chance to implement this technology in a product.