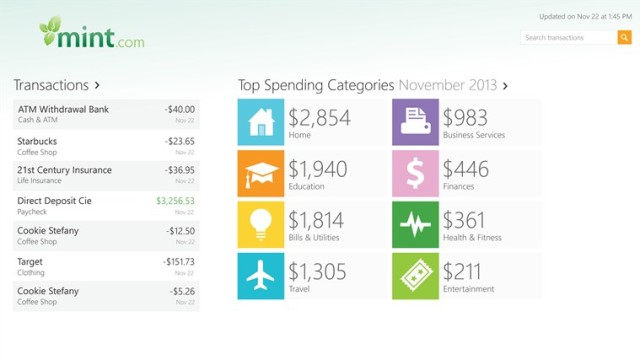 First launched in 2007 as a web browser service, Mint has become a popular way for people to keep track of their finances. Since its release, more than 13 million people have used Mint, and the company has also released apps for iOS and Android devices. Today Mint has launched its long-awaited apps for both Windows 8.1 and Windows Phone 8.

The apps, which are now available in the Windows Store and Windows Phone Store, both offer a way to track all of a user's accounts from their checking and savings sources, along with credit cards, in one place. In fact, both apps have Live Tile support, so that users can get instant updates on their accounts from their Start screen.

If you have problems keeping up with all of the bills that you have to pay every month, the new Mint apps can send over reminders to alert you when a payment is due. It can also sent out warnings if an account is lower than it should be or if there might be some unusual activity that might indicate identity theft. The Mint apps also offer ways to manage money with advice that's based on a user's spending patterns.

The addition of Mint to Microsoft's latest operating systems shows that both app stores are making noteworthy gains. Microsoft recently announced that the Windows Store had 1.7 million daily app downloads in October, and this week it launched a new TV ad campaign that promoted a number of the third-party apps that are available on Windows 8.1.