The Skydrive cloud-based storage service from Microsoft may be getting some more storage options along with some app programs. The Brazil-based web site Gemind.com reports (via TNW) that it has discovered these new options via a check on their version of the Skydrive surface.

A screenshot from their discovery seems to indicate that Microsoft has plans to release Skydrive specific apps for Windows and Mac-based PCs at some point in the future. Microsoft has already released Skydrive apps for smartphones, including Windows Phone and iPhone devices. 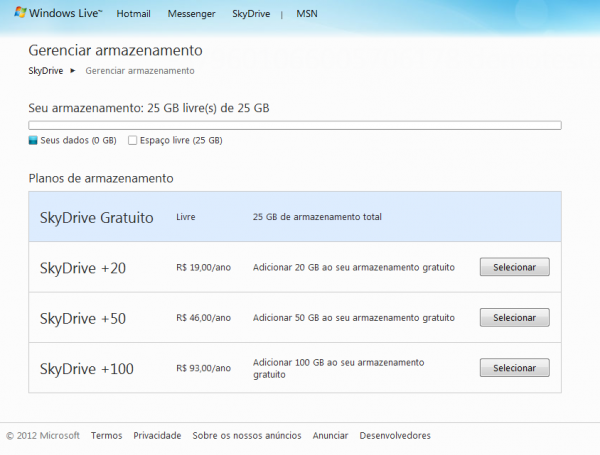 Yet another screenshot seems to show that Microsoft plans to expand Skydrive's storage options beyond the free 25 GB of cloud storage it already offers its users. The screenshot indicates that user will soon be able to purchase an additional 20 GB, 50 GB or even 100 GB for an additional fee.

If true, Microsoft is setting Skydrive to be more of a major player in the consumer cloud storage service. In addition, there are rumors that Google is preparing to launch a similar service sometime in the near future.

Microsoft has also been promoting Skydrive more, including an infographic released last week that tries to make the case that using the service for sharing files is much better than the old fashioned way of emailing attachments to others.