When Microsoft announced the launch of its Lumia 630 in the UK a few weeks ago, its representatives were proud to reveal that the device was priced at just £89.95 off-contract. Windows Phone UK director Leila Martine told me at the event that the price point was important given the competition presented by other low-cost devices, including Motorola’s similarly priced Moto E, which costs just under £90, SIM-free.

Along with its announcement, Microsoft issued a press release for news organisations that weren’t at the event, which led with the “affordability” of the device and its “exceptional price point of only £89.95”. Many of those who wrote about the 630’s UK launch also focused on its low price.

But a month after the device went on sale, not one of the five carriers and retailers that Microsoft identified in its press release is selling the device for £89.95. So if you’re planning to buy a Lumia 630 in the UK, just how much will you be expected to pay? 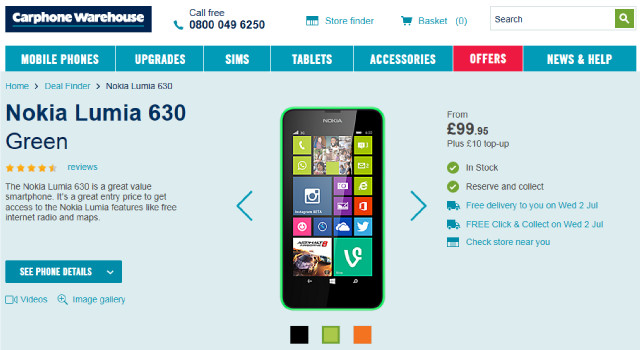 On Pay As You Go (PAYG), the cheapest deal at Carphone Warehouse is £99.95 for the handset, plus a mandatory £10.00 credit top-up with O2, Orange, T-Mobile or Virgin Media. It’ll cost you £129.95 (+£10) if you buy it with Vodafone PAYG, but most Carphone Warehouse PAYG devices are sold unlocked anyway, so you may as well get it with a SIM card from one of the other networks and save yourself money overall. 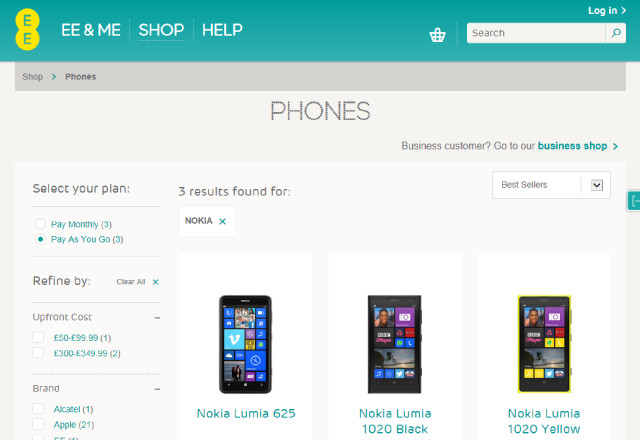 EE is the UK’s largest 4G network, but it is also responsible for the 3G brands of the two companies that formed the joint venture that established it: Orange UK and T-Mobile UK. Microsoft named EE as one of its UK launch partners, but it is still not selling the device directly (although its 3G customers can purchase it via Carphone Warehouse - see above).

On EE's website, the only two Windows Phones that it offers are the older Lumia 625 and the Lumia 1020 (the one with the 41-megapixel camera). Numerous sales staff told us that they did not know if or when the Lumia 630 might eventually become available.

The Lumia 630 will set you back just £99.00 at Tesco, including free standard delivery, making it the cheapest of the options here. There is no obligation to add PAYG credit with the purchase, but Tesco does point out that most of the handsets that it sells are “locked to the network” mentioned in the product description, which in this case is Tesco (which itself runs on the O2 network). 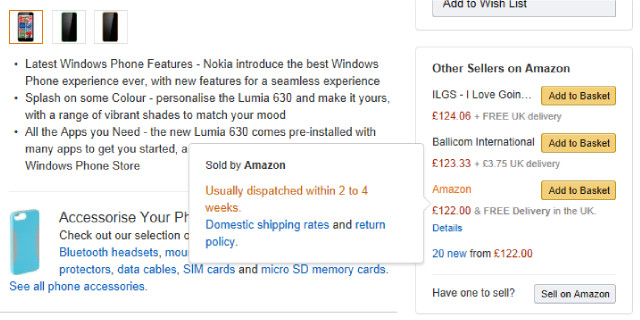 Amazon is the last of the retailers mentioned by Microsoft in its press release. Amazon’s official price for the Lumia 630 is just under £122 at time of publication (albeit with quoted delivery times of up to four weeks). Third-party retailers are selling it via the Amazon Marketplace for as little as £107.

Microsoft began selling handsets on its Store website shortly after the Lumia 630’s UK launch. However, the price is £40 (or 44%) more expensive than the £89.95 that Microsoft originally quoted, with the 630 being sold on MicrosoftStore.com for £129.95.

Bear in mind that SIM-free pricing and pay-as-you-go pricing are never quite the same, as networks tend to subsidise at least a small part of the hardware cost on PAYG handset sales. Microsoft and Amazon appear to be selling SIM-free handsets, without these carrier subsidies.

It should also be pointed out that Microsoft did state in its original press release - not prominently, but right down towards the end - that the Lumia 630 would be priced from £89.95. However, given that the company started off (both in person at the launch, and in its press release) by saying that it would be priced at £89.95, not from that price, it's hardly surprising that many expected to be able to buy the device for that amount. 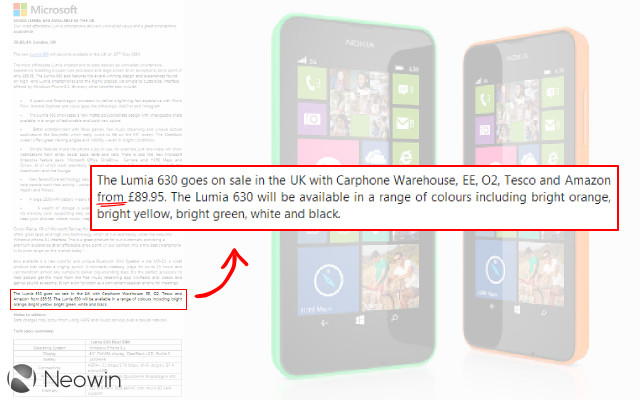 In fact, The Next Web, TechRadar, GSM Arena, Unwired View, Forbes, Coolsmartphone, The Inquirer, Trusted Reviews, Recombu, Good Housekeeping, T3, and many other news outlets were all left with the distinct impression that the device would go on sale for, not from, £89.95. The fact that not one of Microsoft's launch partners - nor indeed Microsoft itself - is selling the handset at that price is rather odd, and calls into question why that amount was quoted on the press release in the first place.

For the most price-sensitive buyers considering a device at this end of the smartphone market, that extra £10 or £20 could make a big difference between choosing the Lumia 630 and opting for something else entirely.