Nokia will officially launch the 41-megapixel Lumia 1020 smartphone in the U.S., via AT&T, on July 26. Now Nokia's U.S. division is offering a way for residents of that country to win one of five Lumia 1020 devices before they officially go on sale. 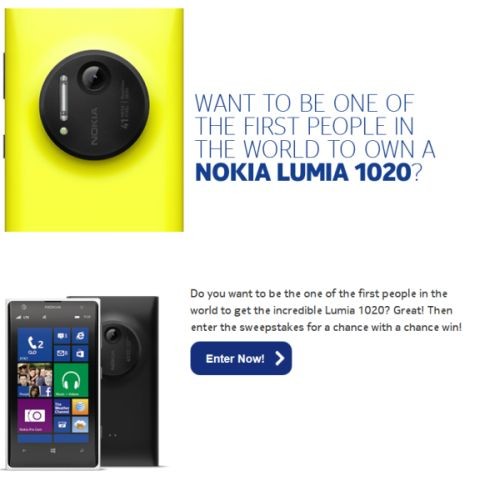 The Nokia U.S. Facebook page is the location for the giveaway, which runs from now until Tuesday, July 23, at noon Pacific time (3 p.m. Eastern time). You simply fill out your name, email address, phone number and zip code on the page to entry.  You can also invite any of your Facebook friends to enter the contest and for each friend that does enter based on your invite, you get an additional entry into the giveaway.

Contest participants must be at least 16 years of age and are a legal resident of the U.S. or the District of Columbia. Just in case you are wondering, if you do win you'll get the Nokia Lumia 1020 only. You will still have to sign up on AT&T's network to use the device as a phone, although we supposed you could simply use the Lumia 1020 as a WiFi-only device if you didn't want to use AT&T. Winners will be drawn on July 24 and notified by the next day.

Source: Nokia US on Facebook via WPCentral | Image via Nokia