Oukitel is one manufacturer that keeps releasing interesting smartphones from time to time. It is best known for the K4000, K6000, K10000 and recently the K10000 Pro smartphones, which have big batteries while staying in the low to mid price range. The U16 Max does feature a big battery too, but the phone's main selling feature is its large 6-inch screen. Read on to find out whether this phablet is a good fit for you.

Until now I have reviewed three phones carrying a Max moniker viz. the Xiaomi Mi Max, ZTE Nubia Z11 Max and UMi Max, and I have come to the conclusion that a 5.5-inch screen is the biggest that I can operate comfortably. These big phones can get very uncomfortable to use over a long period of time, especially during phone calls or typing long emails. Although media consumption, browsing, and reading can be quite delightful on them, buyers need to realize what the real world challenges are.

The U16 Max is not too different from these other phablets and comes with its set of unique challenges as well. I can only imagine people with big palms to even consider such a device. Having said that, let's check out what this Oukitel smartphone is capable of.

Oukitel's typical orange box once again is a pretty standard affair. In the box, there is the smartphone itself, a USB charging cable, a power adaptor, a SIM card removal tool and the warranty and usage information booklets. Similar to its previous offerings, the U16 Max also comes with a pre-fitted screen protector and a transparent TPU case. There are no headphones to go along with the device.

The U16 Max draws some of its design inspiration from Huawei's Mate 8 phablet, which is also a 6-inch device that launched last year. There is nothing special about the design, and Oukitel has seriously overlooked the device's ergonomics, as it is very hard to grip such a large smartphone. Additionally, the U16 Max is quite heavy at 222g which makes it even more difficult to use or hold comfortably over prolonged intervals. 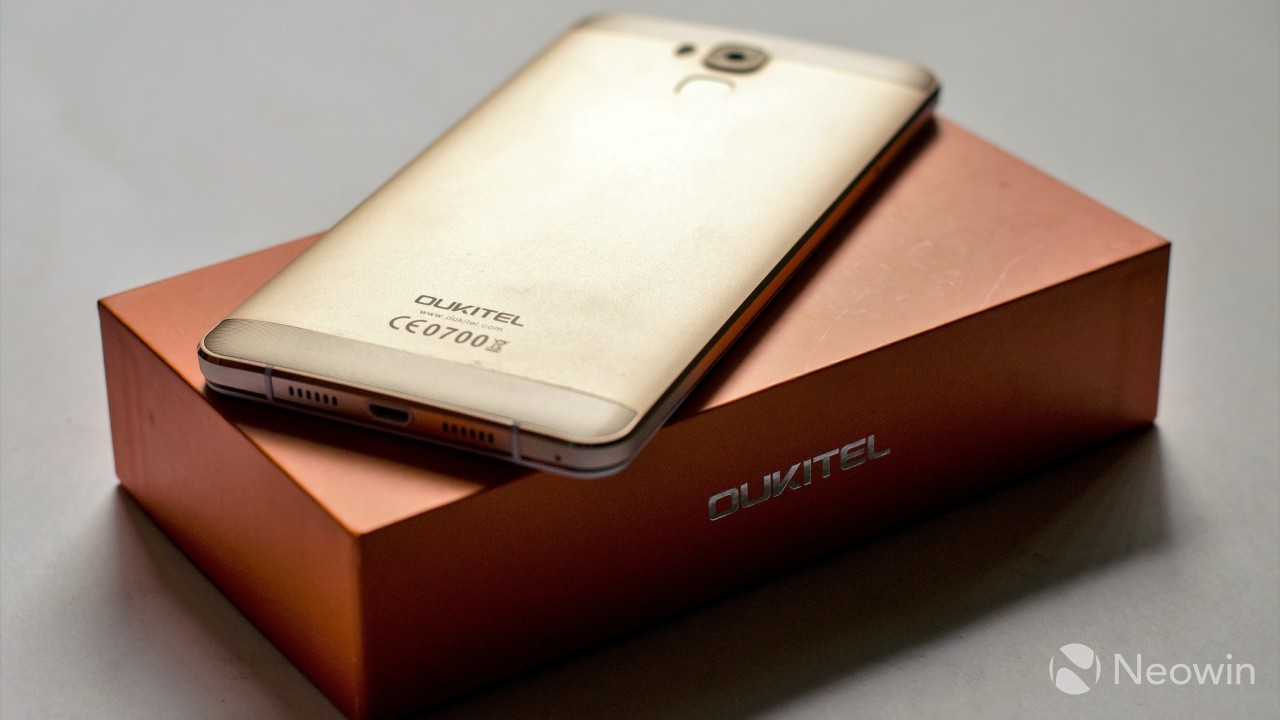 All of the hardware buttons are placed on the right edge of the smartphone, while the fingerprint sensor is positioned on the back side directly under the camera. For someone with small hands, reaching the fingerprint sensor could be an issue, as it is closer to the top edge than the center on this large device. The metal body is slippery, which makes things even worse for such a large device. 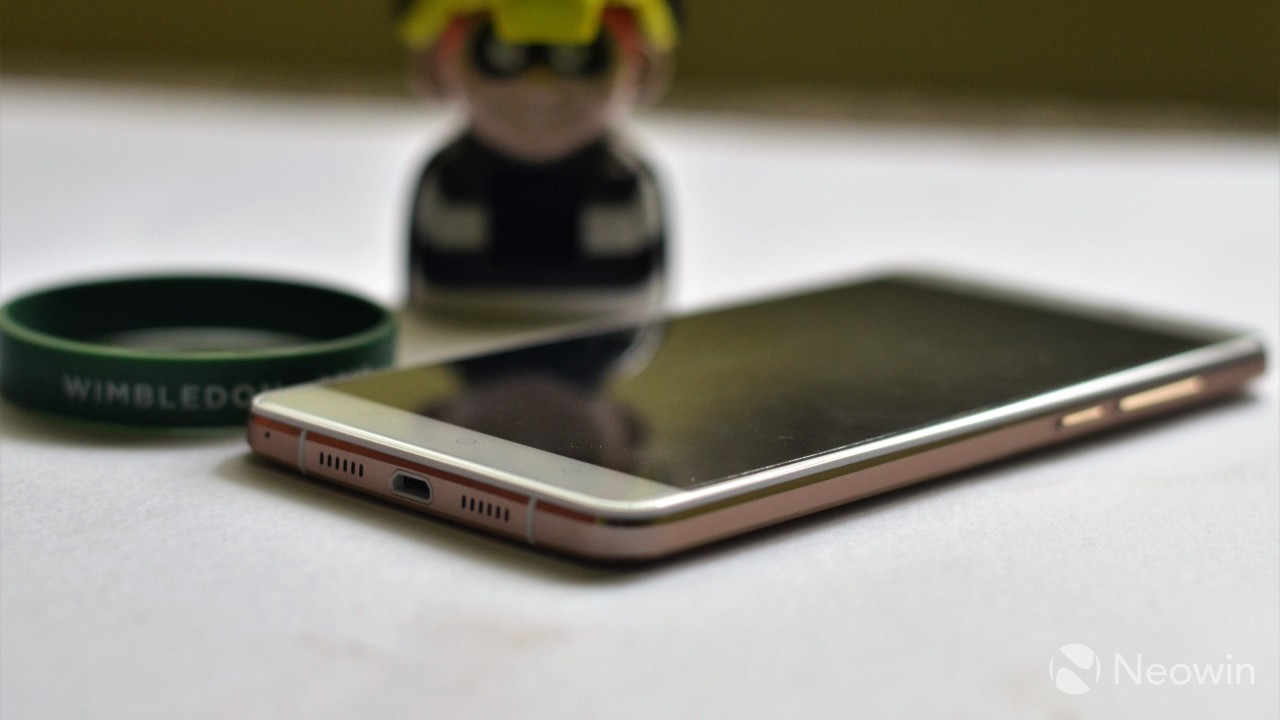 With the recent trend among smartphone makers to minimize the bezels, the relatively big ones on this smartphone give it a dated look. Even after considering that this smartphone is priced around $125, it is hard to ignore its uncomfortable design and bland look. Since it is a large device, only those genuinely in need for such a device should consider it, as it is uncomfortable to use for those with small hands.

While the large display of the U16 Max is its main highlight, it is also a disappointing aspect of the phablet. The 6-inch LCD comes with an HD resolution of 1280x720 and translates to 245 pixels per inch, which barely cuts it nowadays. The low quality of the display is quite noticeable due to the large screen real estate. 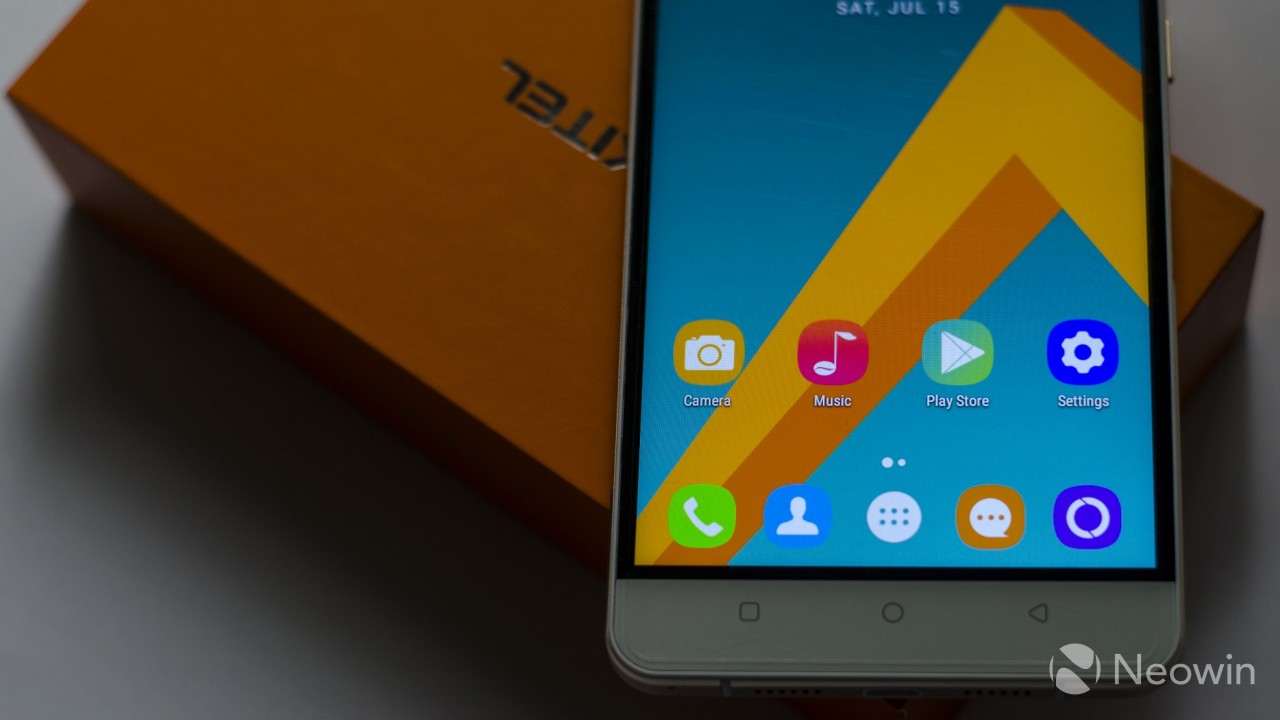 The color reproduction of the screen isn't good enough compared to what manufacturers like Xiaomi and Lenovo are offering in similar price brackets. Although the colors aren't necessarily washed out, they somehow look different than on other devices.

Since the U16 Max is powered by Android Nougat, it features the ability to change the size of items shown on the screen, which makes things a little better and allows fitting more things on the low resolution of the large screen.

Overall, I think that the U16 Max should have been shipped with a 1080p display similar to the Nubia Z11 Max or the Xiaomi Mi Max. In its current form, the screen is definitely a letdown and is ironically the showcase feature of the device.

Oukitel does a decent job of wiring the basics together, and the U16 Max is no different. The smartphone supports Asian and few European 4G LTE bands, US users are unfortunately out of luck as the 700, 1700, and 1900MHz bands aren't supported by the device. During my time with it, I didn't have any issues with receiving or making calls, or connecting to data networks. I found voice calls to be clear enough and callers on the other end were also able to hear me clearly.

The audio output from the loudspeaker as well as the 3.5mm headphone jack was of decent quality as well. Like other Oukitel smartphones from the past, this one too has audio enhancement settings for loudness, bass, and basic environment simulation options. They don't make that much of a difference to the audio output from the loudspeaker, but are helpful while using headphones.

The U16 Max features a 13-megapixel rear camera and a 5-megapixel front camera which deliver a strictly average image quality. Even in decent lighting, the images produced by the rear camera are dull and contain artifacts towards the edges. Dynamic range is also quite poor so using the camera for capturing anything worthwhile is going to be difficult.

There isn't a lot to say about the front camera either as you can see in the samples posted towards the end of the section. The images are very soft and likely interpolated from a lower resolution. It is rather disappointing that Oukitel has shipped such poor quality cameras on this device, as similarly priced devices from Xiaomi such as the Redmi 4A and Redmi 4 have much better cameras.

The rear camera is capable of shooting full HD (1080p) 3gp video at 30 frames per second, but the poor quality in still image capture transfers over in this case too. At night, there is absolutely no use of the camera as it struggles to focus and capture any light even while the flash is turned on. Also the frame rate is extremely poor.

You can see the results in various lighting conditions in the samples below:

Android Nougat 7.1.1 is what you get out of the box on the Oukitel U16 Max. The build is mostly stock with the exception of the lightweight launcher which is used instead of the default Nougat launcher. The custom launcher is pretty good too, but the icons don't quite fit in with Android Nougat's design elements. 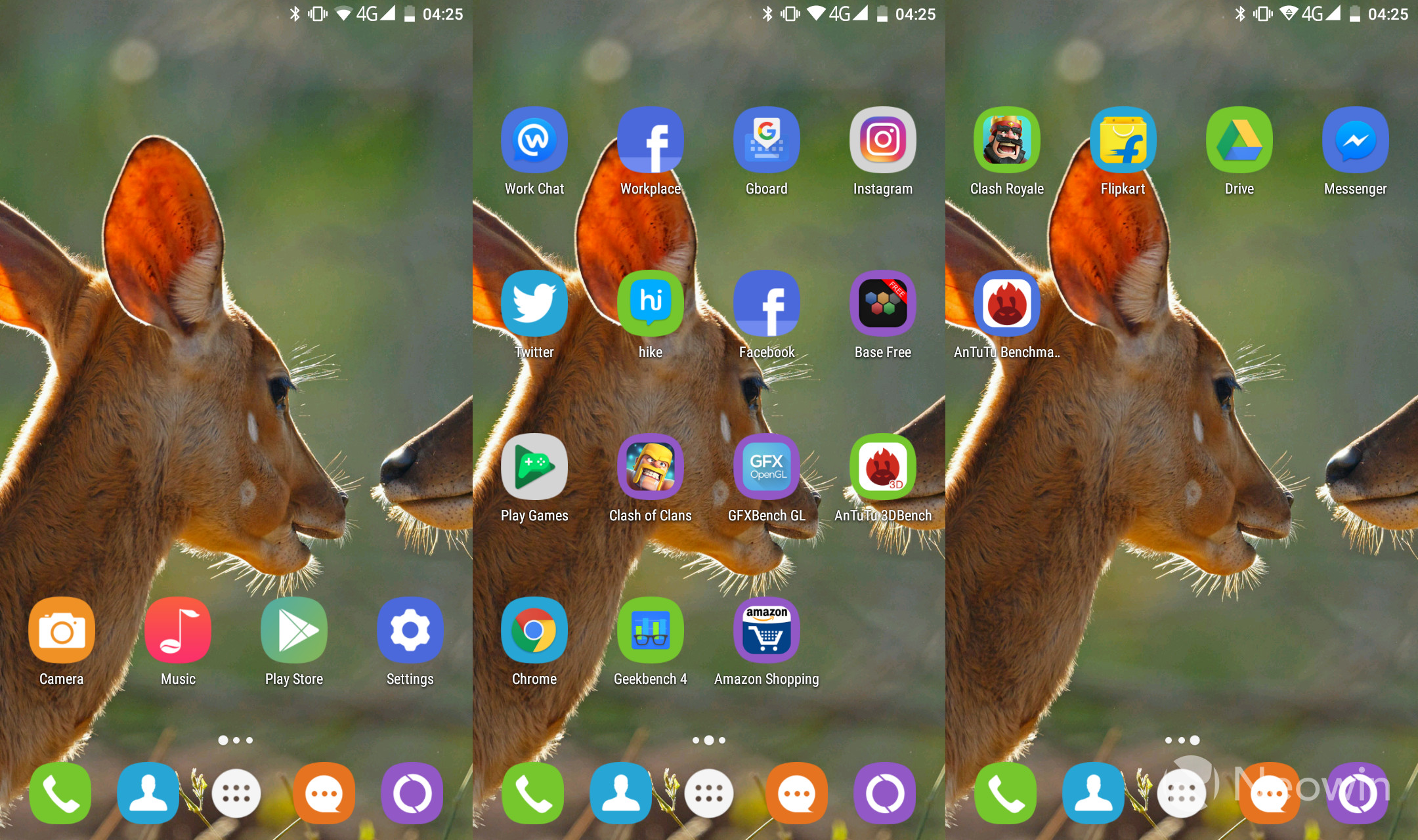 I found the software to be stable and it worked quite well all the time. It is a good thing that Oukitel hasn't pre-loaded any apps or customized the Android build more than what they have already done. Since these smaller companies fail to address any issues occurring due to any customizations the end user is often left with no option but to live with them. Fortunately, it isn't the case with this smartphone.

Oukitel is using the same system updater found on most Chinese smartphones and during my time with the device, I received four updates which supposedly improved stability. There was no adware present on the device, unlike the Bluboo Edge smartphone that I reviewed earlier this year. Overall it was a decent software experience for me and I didn't have much to complain about in this case.

Performance-wise, the Oukitel U16 Max is quite good and can handle day-to-day tasks well. There isn't much of lag even with five to six apps running simultaneously. The smartphone is powered by an octa-core MediaTek MT6753 processor and 3GB of RAM. These specs seemed more than enough for basic social networking and communication apps, as well as casual games.

A notable mention in terms of performance is the responsiveness of the fingerprint sensor, which is very quick to recognize stored prints and unlock. This is especially important here because most smartphones in this price range are annoyingly slow to detect fingerprints, and I often end up disabling the feature altogether. 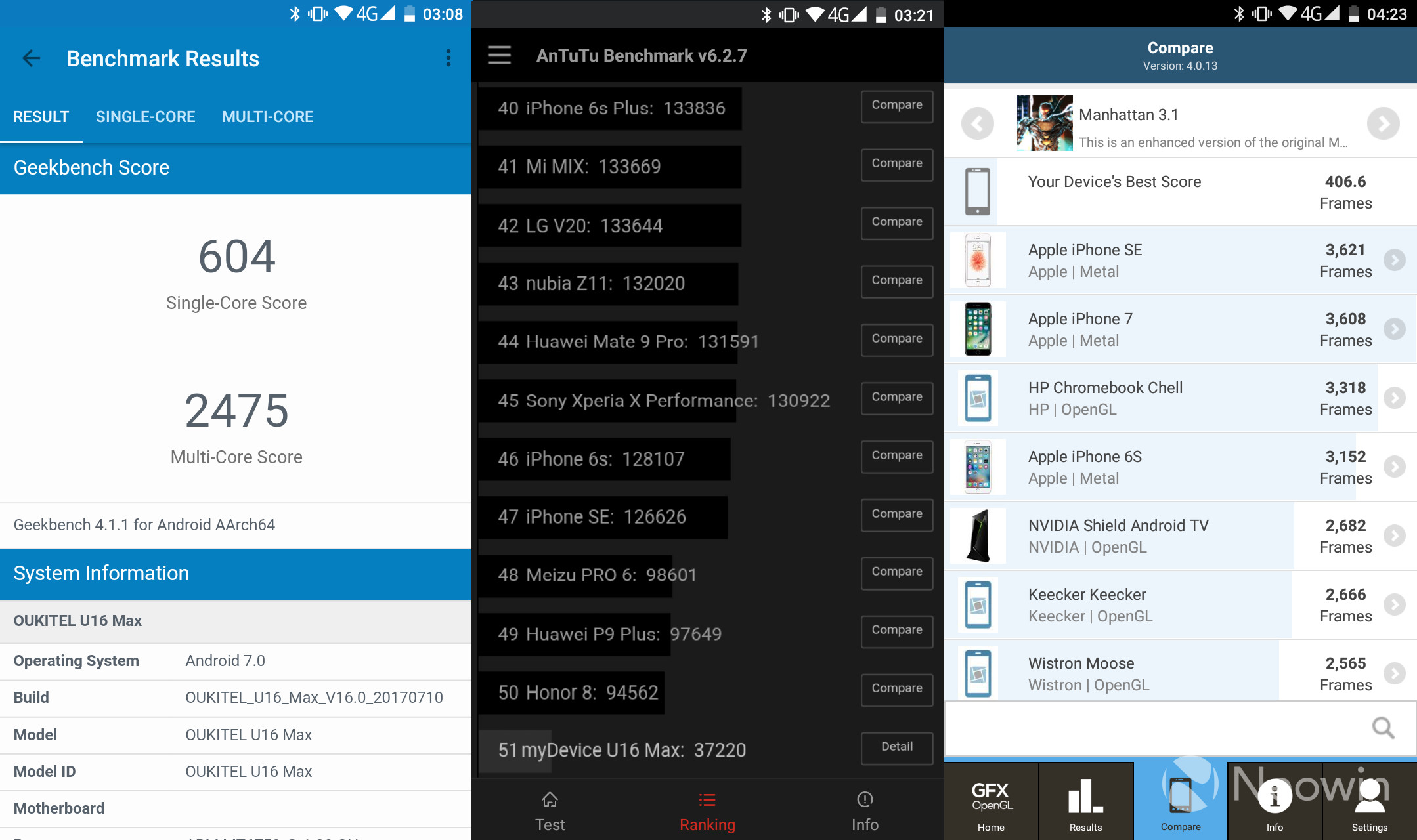 Benchmarks are obviously not in favour of the MediaTek chipset powering the device. It does fall shy on points compared to three year old flagships, but in a day-to-day scenario you won't be too bothered with its performance. To judge the U16 Max's performance by these numbers alone will be a bit unfair, as it is a smooth functioning device in general.

The Oukitel U16 Max has a 4,000 mAh battery, which is one of the better aspects of the device. It lasts for at least a day with moderate usage and has a decent standby time too. On an average I got five hours of screen on time while using the device for Twitter, WhatsApp, Instagram, and Clash of Clans. 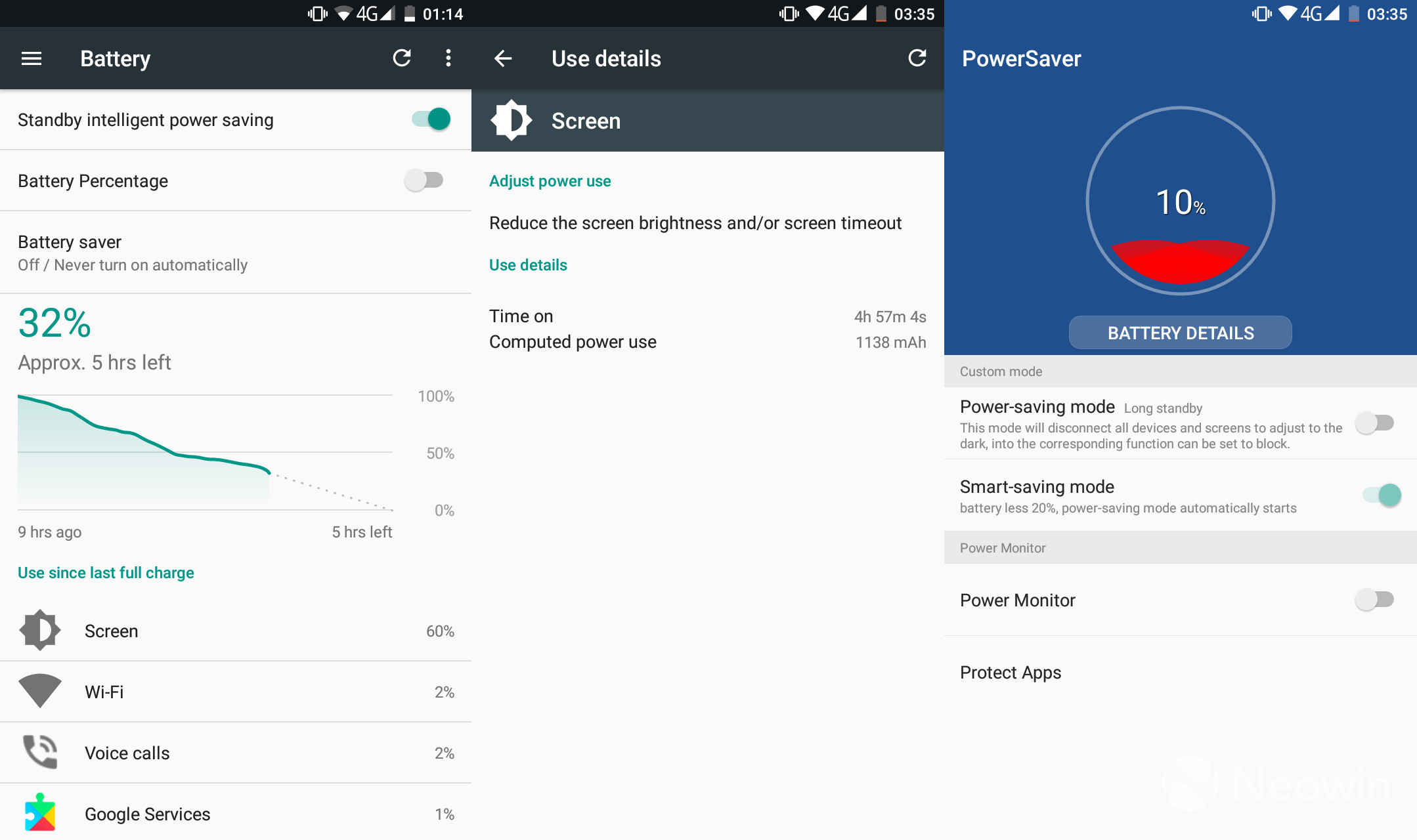 Calling doesn't drain the battery either and I found it a dependable smartphone for productivity due to this. The large screen has a lower resolution, which also serves to the U16 Max's benefit as the processor has to expend less pixel-pushing power. There was no noticeable heating on the rear side despite the phone's metal chassis.

Charging the device takes up to 2.5 hours with the stock charger, and there doesn't seem to be support for PE fast chargers in the device. Power saver mode is tweaked a bit more by Oukitel, but I am not sure whether that has added any extra hours to the standby since the usual Android power saver is completely replaced by the custom one.

However, it is hard to end up with a low battery on the U16 Max unless you have an overnight trip or something and there is no power backup. In most situations, this smartphone will get you home.

If you are in the market for a large screen device, only then you might want to consider the Oukitel U16 Max. There is nothing in it that you won't find in a regular sized smartphone apart from the big screen. From a general point of view, it does some things well and some really poor, and users looking for a large device might have to decide based on their budget and expectations whether to go for this device.

The performance, battery and call connectivity offered by the U16 Max is good, but other aspects are very bad even at this price point. If you want a 6-inch smartphone, but don't want to spend more than $200 then I am afraid there isn't a lot of choice available. Beyond that price point, the Mi Max 2 is a fantastic device which checks all of the boxes, but is not available in most markets yet.

Other smartphones featuring large screens are the BLU Studio XL 2, BLU Neo XL and Alcatel Pixi 4. They have their own compromises such as older versions of Android and smaller battery sizes, so buyers will have to decide what they find important in that price bracket. Since the large screen size segment isn't that popular, the options are quite limited and if the U16 Max seems like a good fit for your needs, you can go buy it from the link below.

The review unit was supplied by Oukitel. If you would like to purchase the device, you can head here to purchase the smartphone which currently is priced at around $125 USD on AliExpress. You can check out more information about other Oukitel products on their website.