"Smartwatches are dead" is a phrase that has been tossed out on numerous occasions over the past few years. While there is a valid argument on both sides, there is another similar product on the market that is growing and even evolving. While smartwatches focus on bringing smartphone features to your wrist, I think there is a valid distinction when it comes to fitness trackers that tend to focus on monitoring your daily and physical activities. Over the past couple years, fitness trackers have been evolving to offer more features that bring it to parity with smartwatches, which has made it a more compelling and relevant tool.

Huami is a company you’ve probably never heard of, and rightfully so, as they have only been in business since 2016. The firm is a Xiaomi sub-brand that is responsible for creating the Mi Band 2. The firm has been working on its own fitness line, Amazfit, for the past year and has recently launched its latest product in the United States, the Amazfit Pace.

The Pace is $159.99 fitness tracker that offers a reasonably elegant look and promises “to seamlessly connect biomechanical signals and daily activities with smart data services to promote healthy living and to make your life easier.” While that's certainly a mouthful of techno mumbo jumbo, let's see if the Pace can become a worthwhile asset in your fitness arsenal. 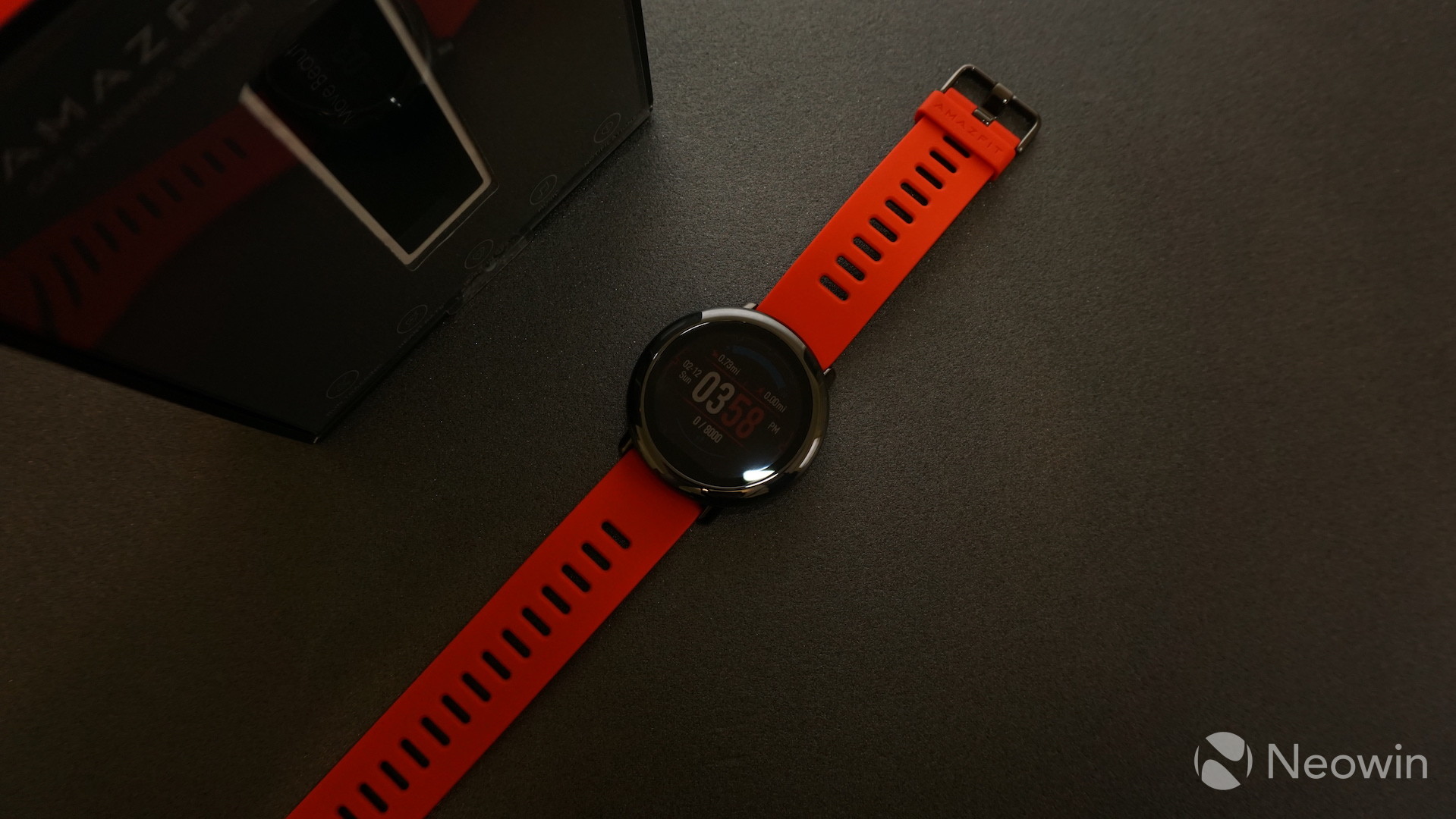 The Amazfit Pace comes in two different color options, with the only difference being the band color. If you're looking for a more understated watch, you'll want to opt for the black band, but if you want to stand out, the bright red option might be more to your liking. 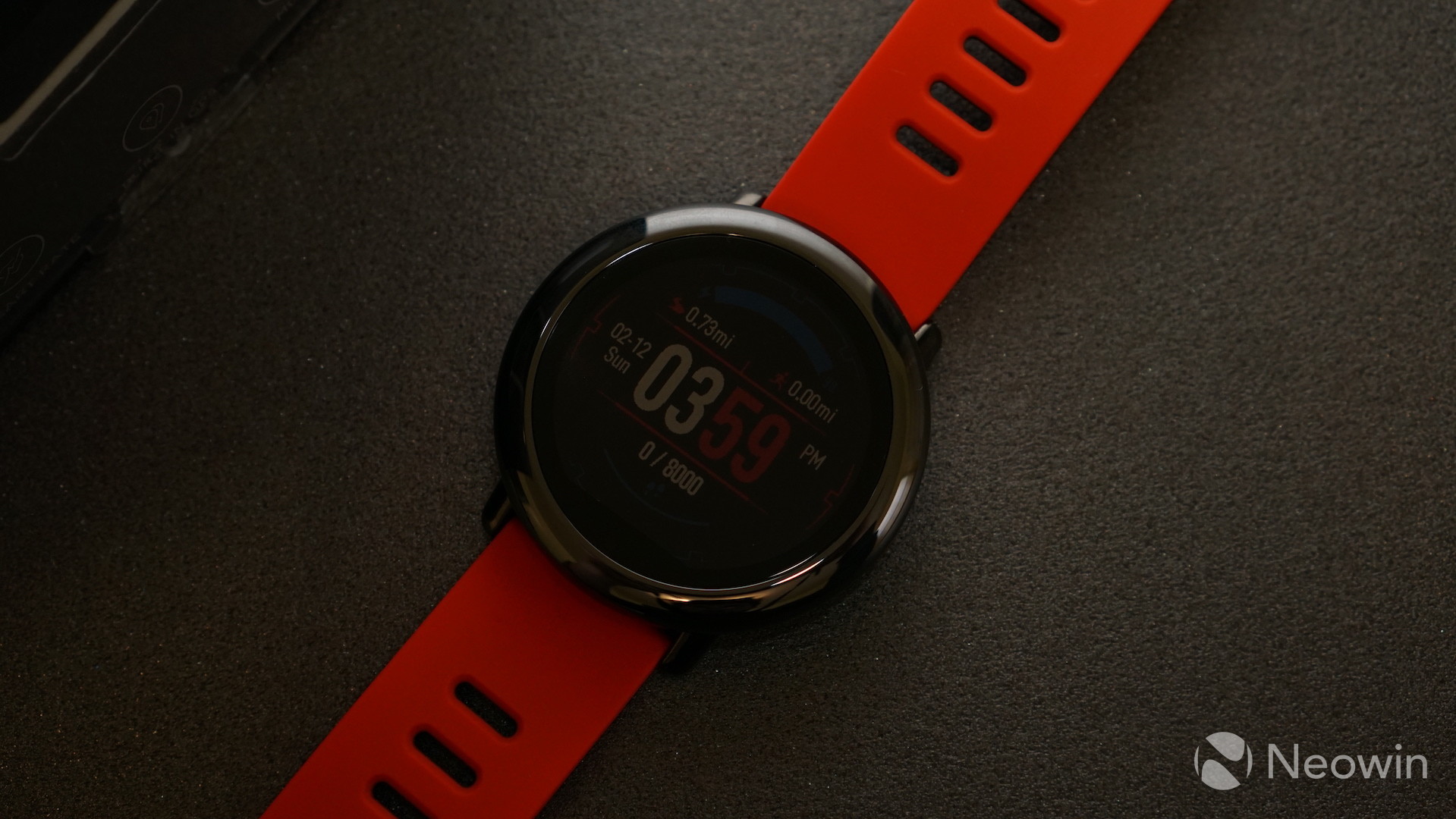 The Pace incorporates a circular design that maintains more of a traditional watch look and is constructed from a ceramic top piece and a bottom plastic portion. The initial impression of the watch from just its looks is that it is fairly cheap. This was quite a common opinion that I got from people that noticed it and while it might look that way thanksin part to the bright red strap that it was paired with, in hand, the device actually feels pretty good. 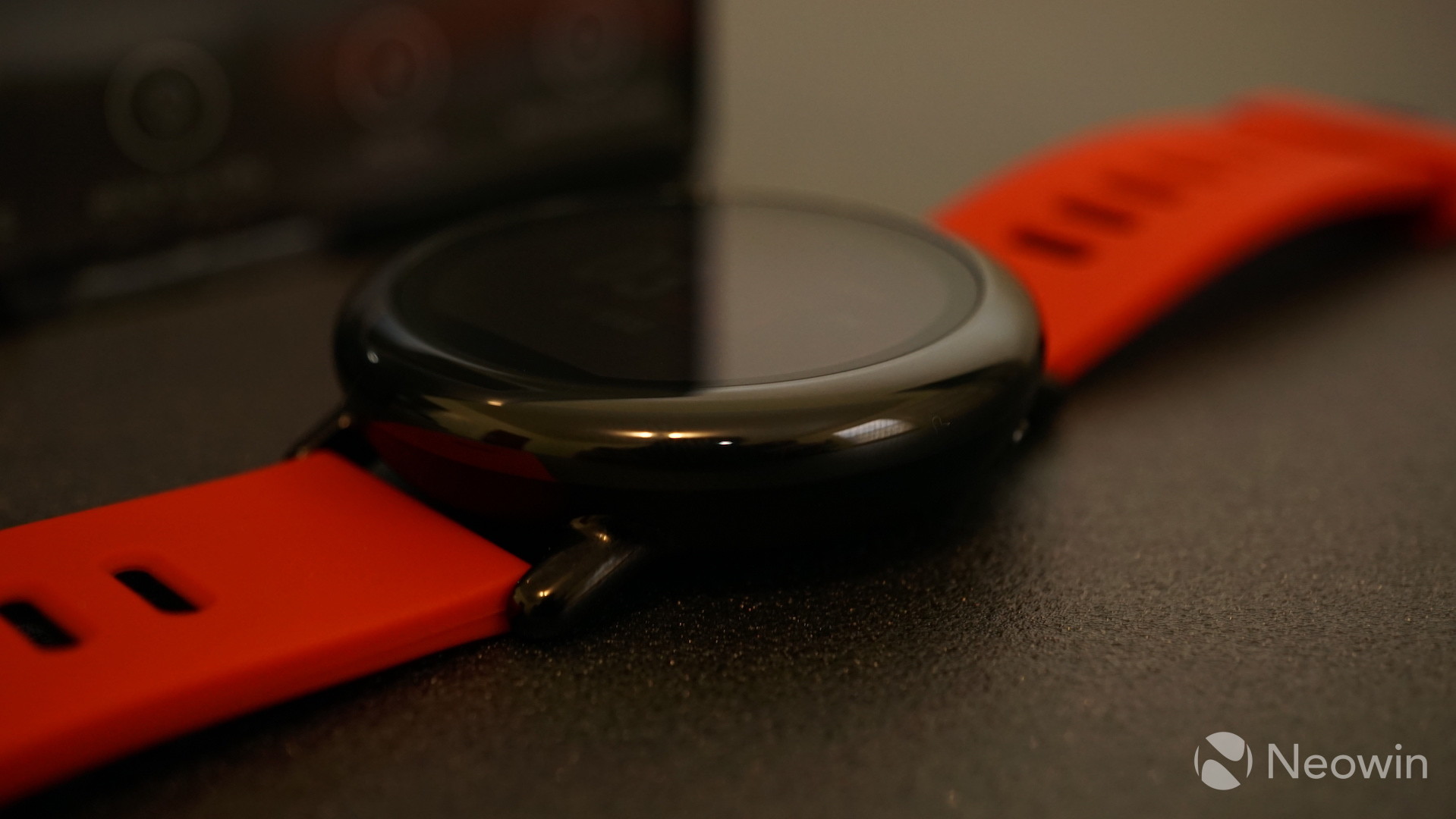 As mentioned, the top piece is constructed from ceramic that feels cool to the touch. If I didn’t know, I would assume that it was constructed from some type of metal due to its feel.. Where the Pace differs from other wearables that I have reviewed, is its always-on trans-reflective, color LCD, touchscreen display. This isn't particularly new technology and typically offers the best of both worlds by giving the user a color display, but being fairly reserved when it comes to battery consumption. 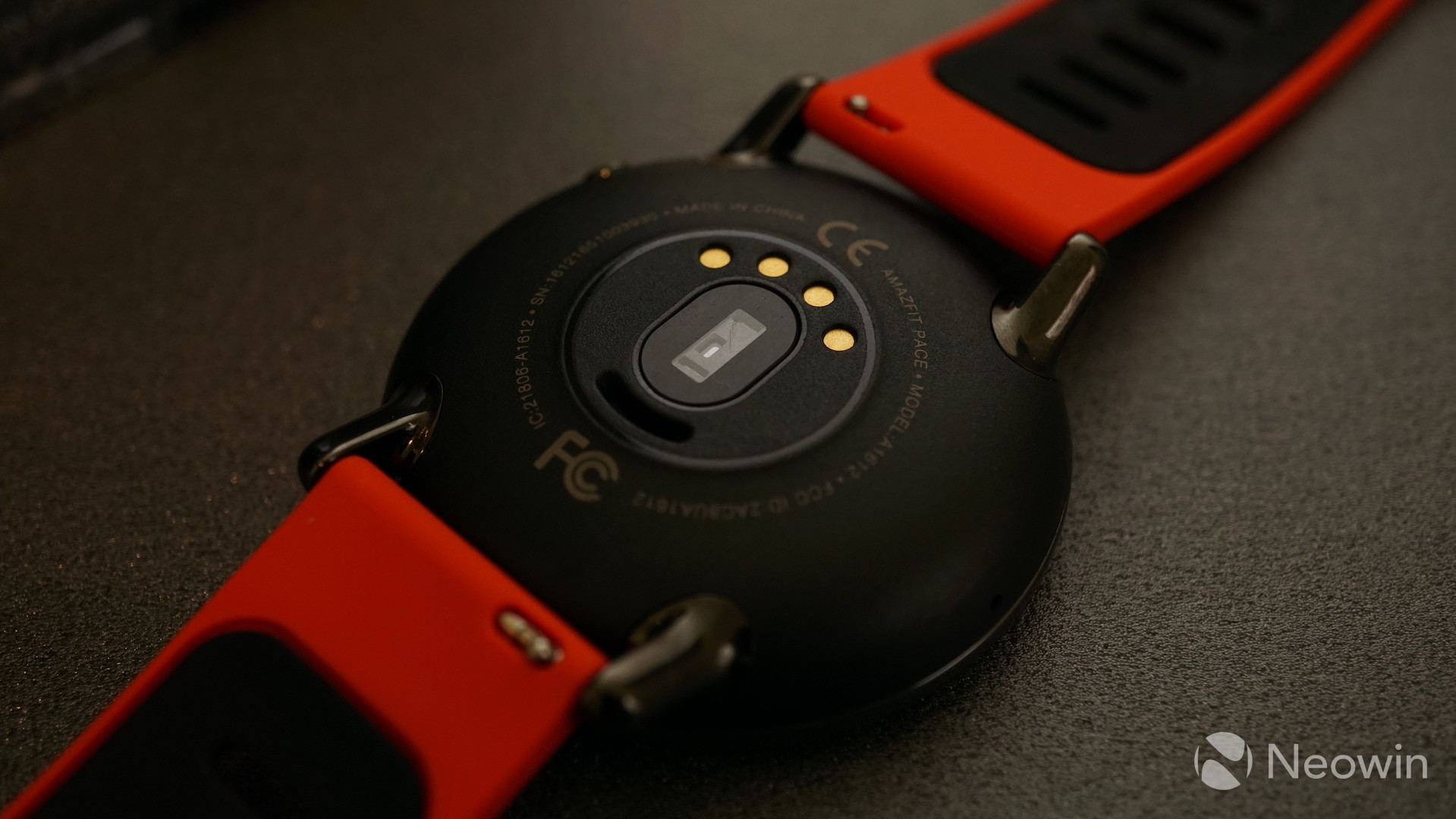 While it has its upsides, the display also has its downsides, like visual quality that degrades when the screen is under exposed to light and its color gamut / depth isn't quite as robust compared to an AMOLED or regular LCD. But, since the Pace has a backlight, the issue of being able to see at night or in dimly lit areas is mitigated.

There is a small portion of the screen on the bottom that houses the sensors, but it isn’t quite as pronounced as something you would find on the Moto 360.

Although the watch’s display is always on, it isn’t always active, meaning that when it is idle, the touchscreen feature is disabled. In order to bring the watch to life, you either need to double tap the display or press the small button located on the right side of the watch. In doing so, you’ll see the watch spring to life, giving you access to ten different “apps” that will show various points of information like the weather, heart rate, stopwatch, sleep tracking, and more. This can be customized using the accompanying smartphone app to show as little or as much as you’d like. 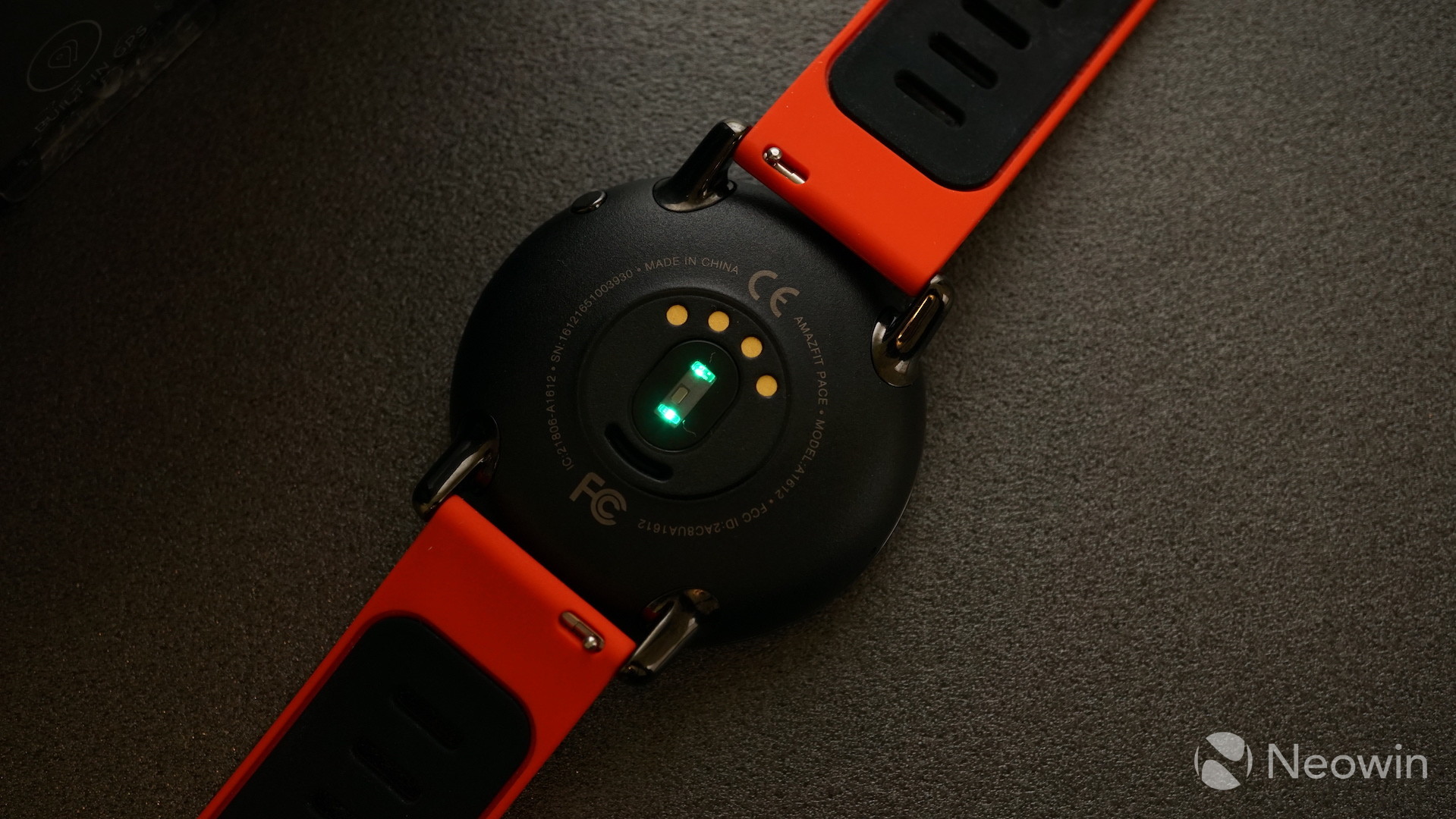 The underside of the watch houses the heart rate sensor and charging pins. While the underbelly of the watch is made of plastic, it feels good on the wrist and makes the watch feel incredibly light. The band is probably one of the more surprising components of the watch, as it extremely supple and feels good on the skin. If you aren't into silicone or rubber, you can always purchase or use a strap of your own, as the watch offers a quick release option that can accommodate any normal watch band.

Due to its construction and being lightweight, the watch felt extremely comfortable when worn, day in and day out. While I usually don’t enjoy wearing a watch to bed, the Pace was in stark contrast to other devices, finding myself often forgetting that the watch was even on my wrist. Over the past couple weeks that I have worn it, the Pace shows no signs of damage or scratches on the bezel or the display, which is a very good sign. 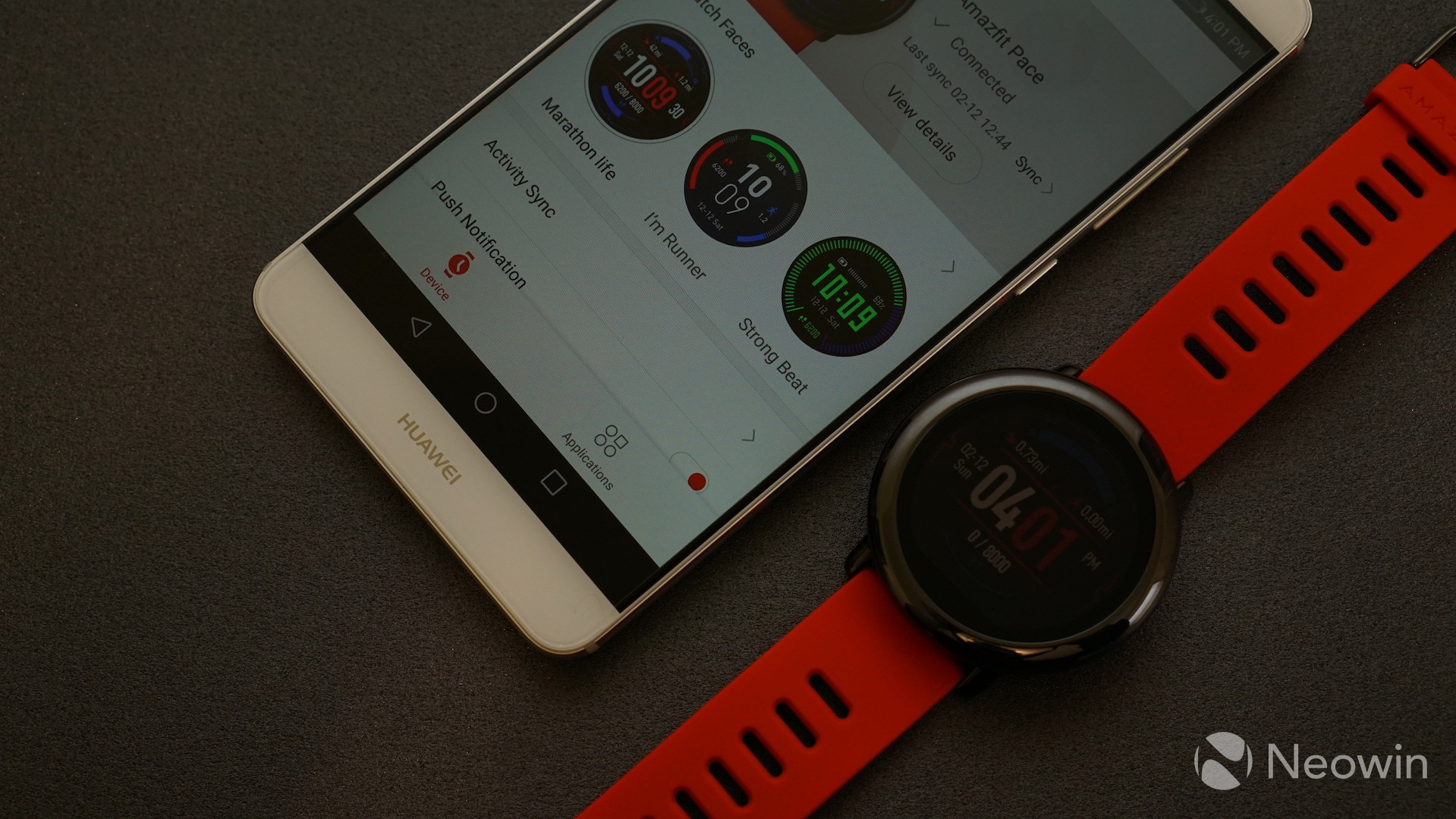 Software is a category that can make or break a smartwatch, especially one that is focused on fitness and activity tracking. Although a watch can feel good and work well, there needs to be a proper hub where all the data can be collected, analyzed, and maybe even shared. Unfortunately, the Amazfit app does not offer any of the features mentioned above, with the data only currently being able to be viewed on the watch itself. Although Amazfit tries to sidestep the issue by partnering with Strava, it isn’t a proper solution as it doesn’t sync a majority of the data that is being tracked by the watch.

It’s amazing to me that a company would build a fitness / activity tracker without offering a proper app that can actually take that data and display it on your smartphone. What is even more mind-boggling is that Amazfit does offer such an app with its other products like the ARC, MOONBEAM, and EQUATOR. 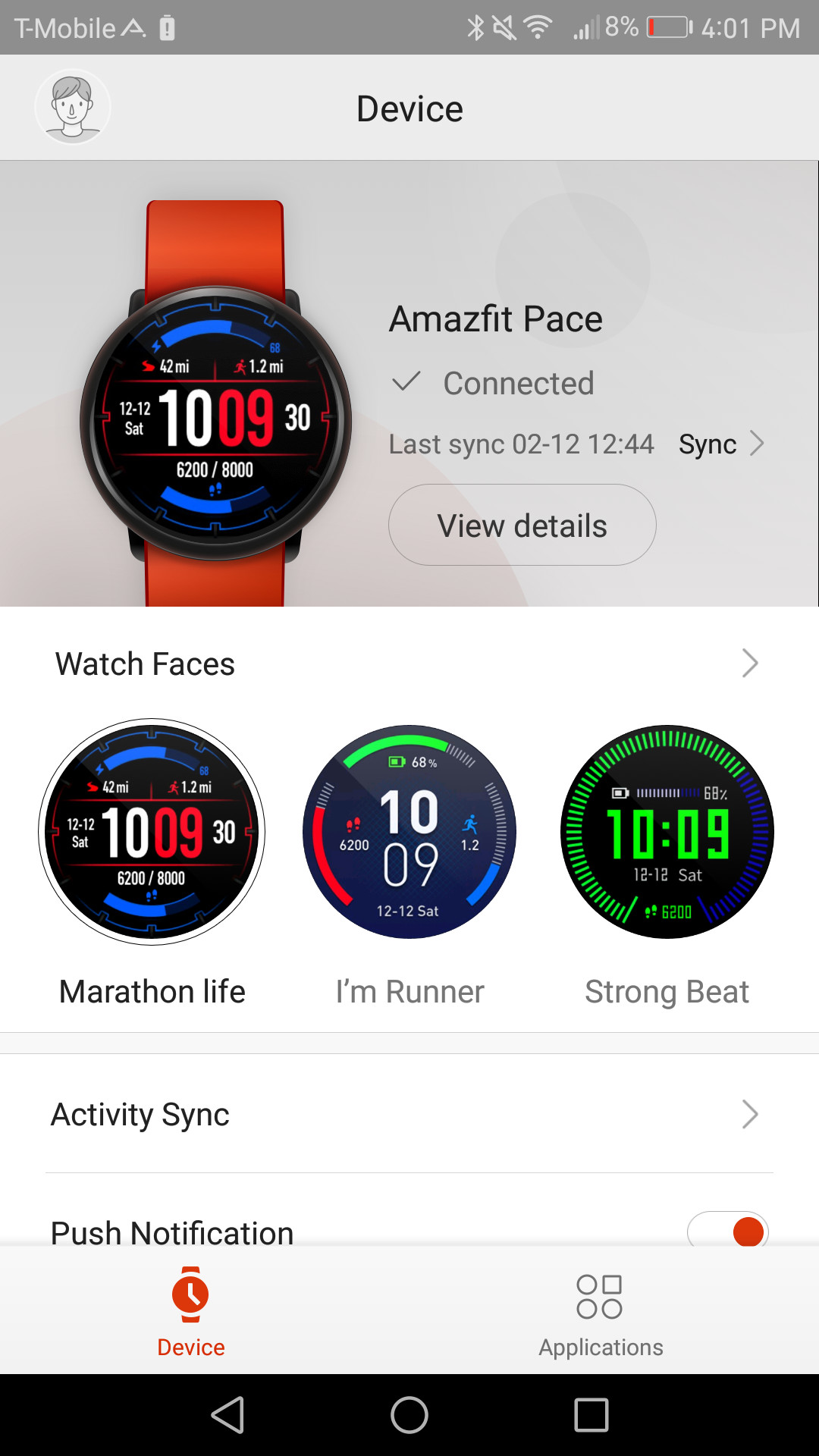 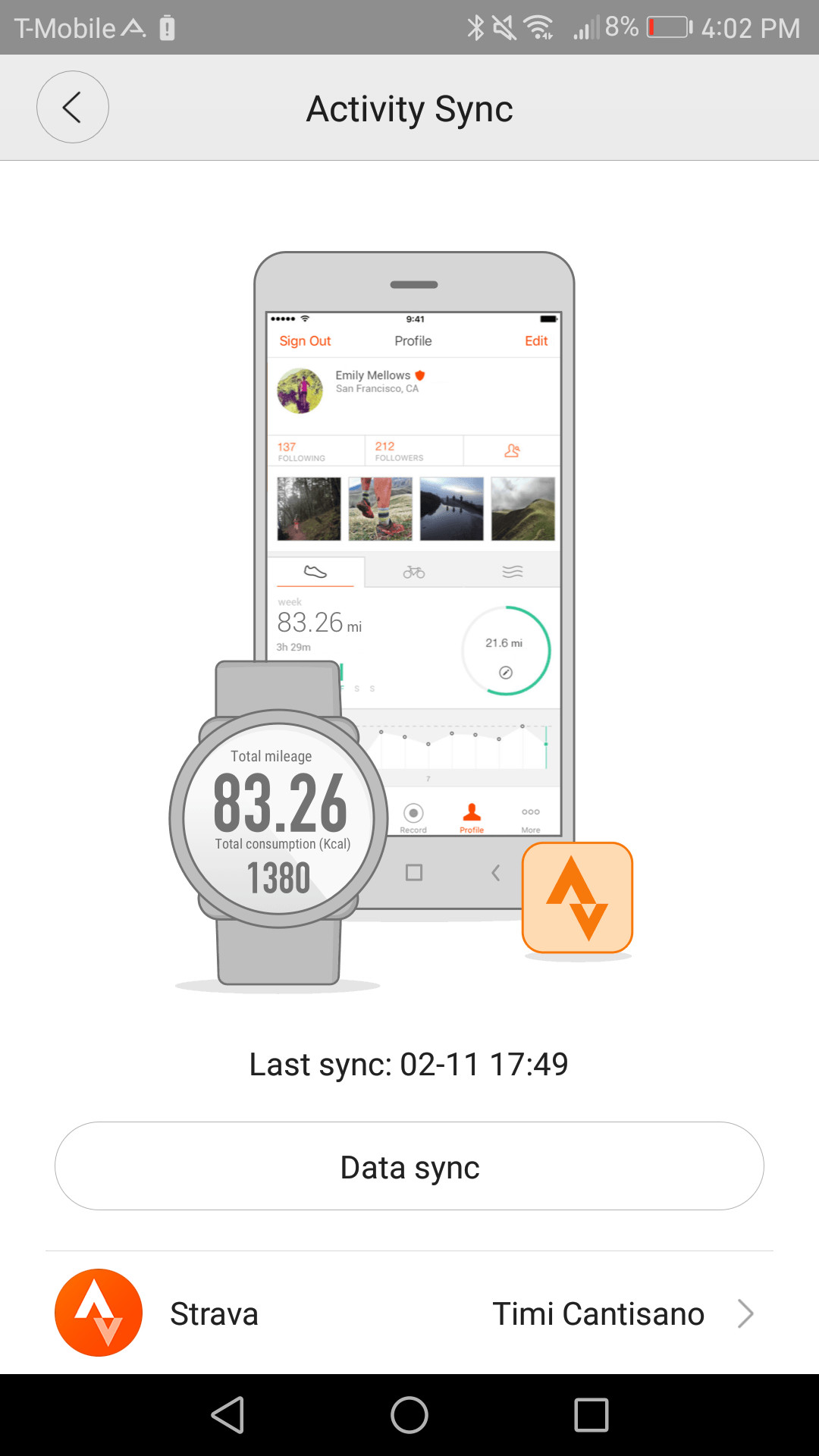 So if it can’t track data, what does the app offer? It provides the user access to a menu that will allow you to change the watch face (which is redundant because this can be done on the watch), with a total of 13 different options, most of which will only display the time in 24-hour format. If you don’t like what you see by default, you unfortunately won’t have the option to download new faces. 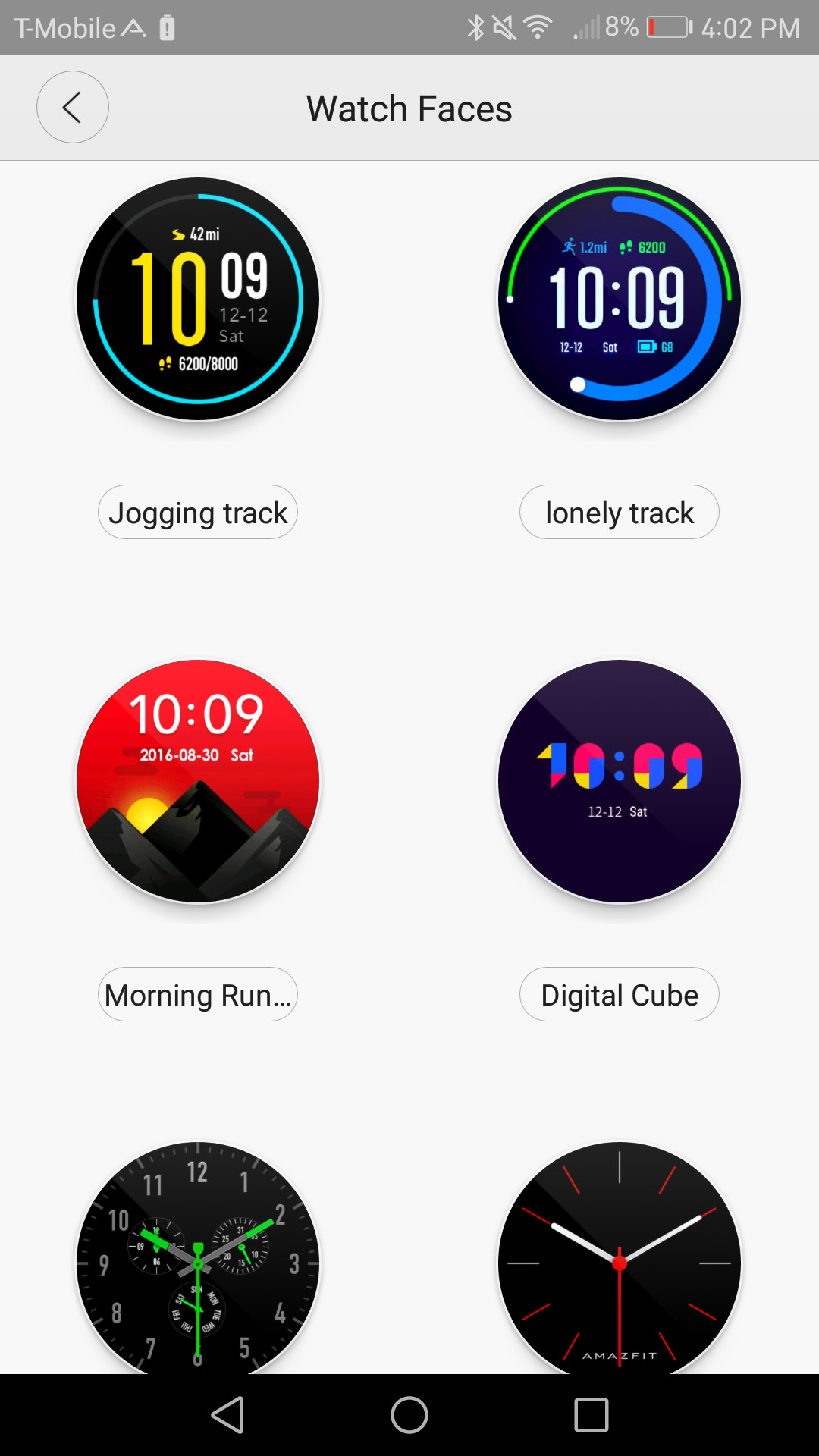 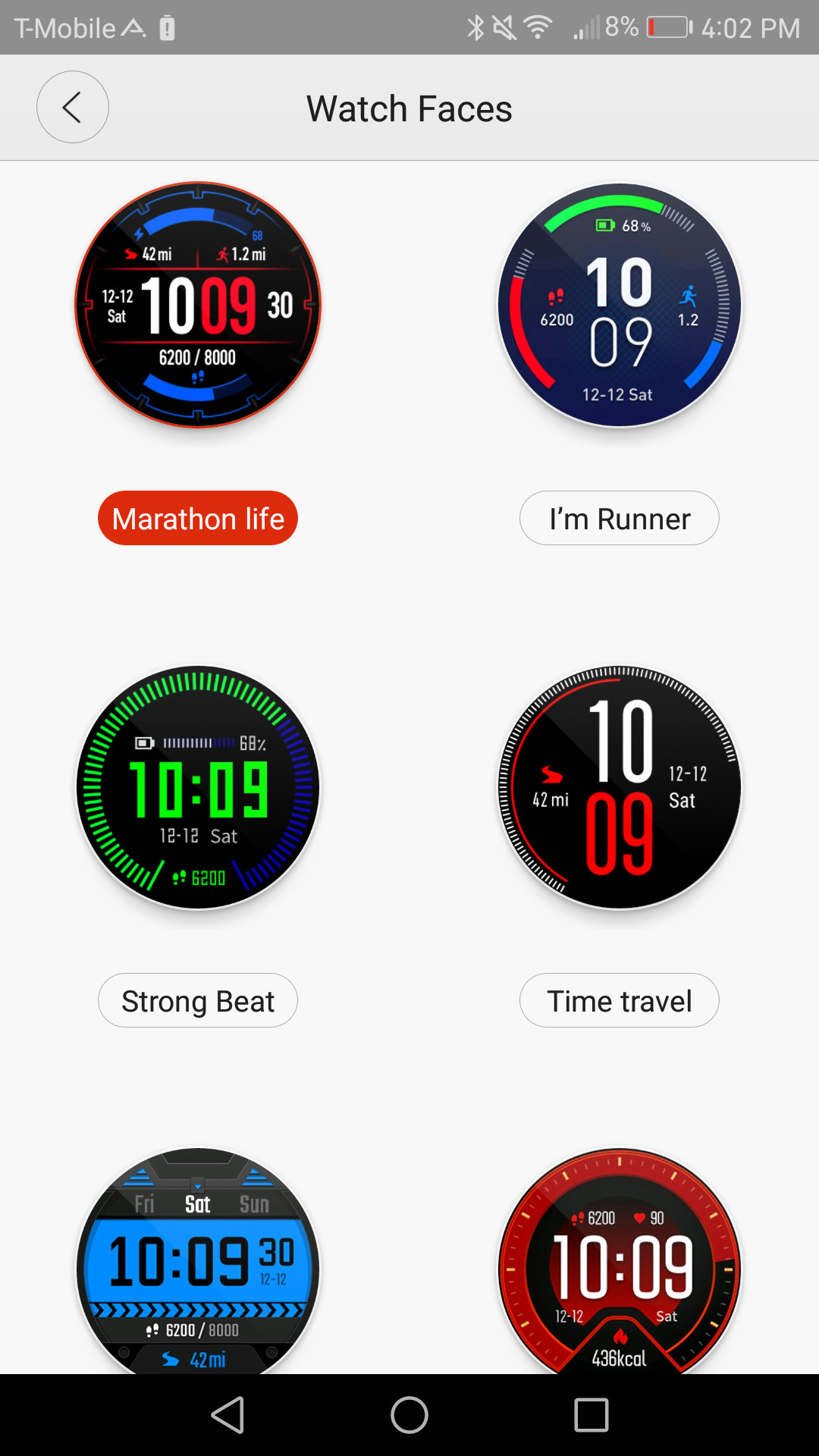 As for the watch itself, it relies on custom software, though navigating it feels very familiar to other wearables like Android Wear and Samsung’s Tizen. Once you have activated the screen, you can scroll right to dive into the app of your choice and select the app by pressing the screen to see more details. Pressing the physical button on the side of the bezel will allow you to return to the watch face, while swiping down will give you quick access to weather, detailed battery life, and toggling silent mode. You can also access a detailed settings menu that allows you to change vibration, scheduling silent times, backlight, tap to wake, and more. If you want to exit an app or notification, you can swipe right and it will bring you back to the previous screen. 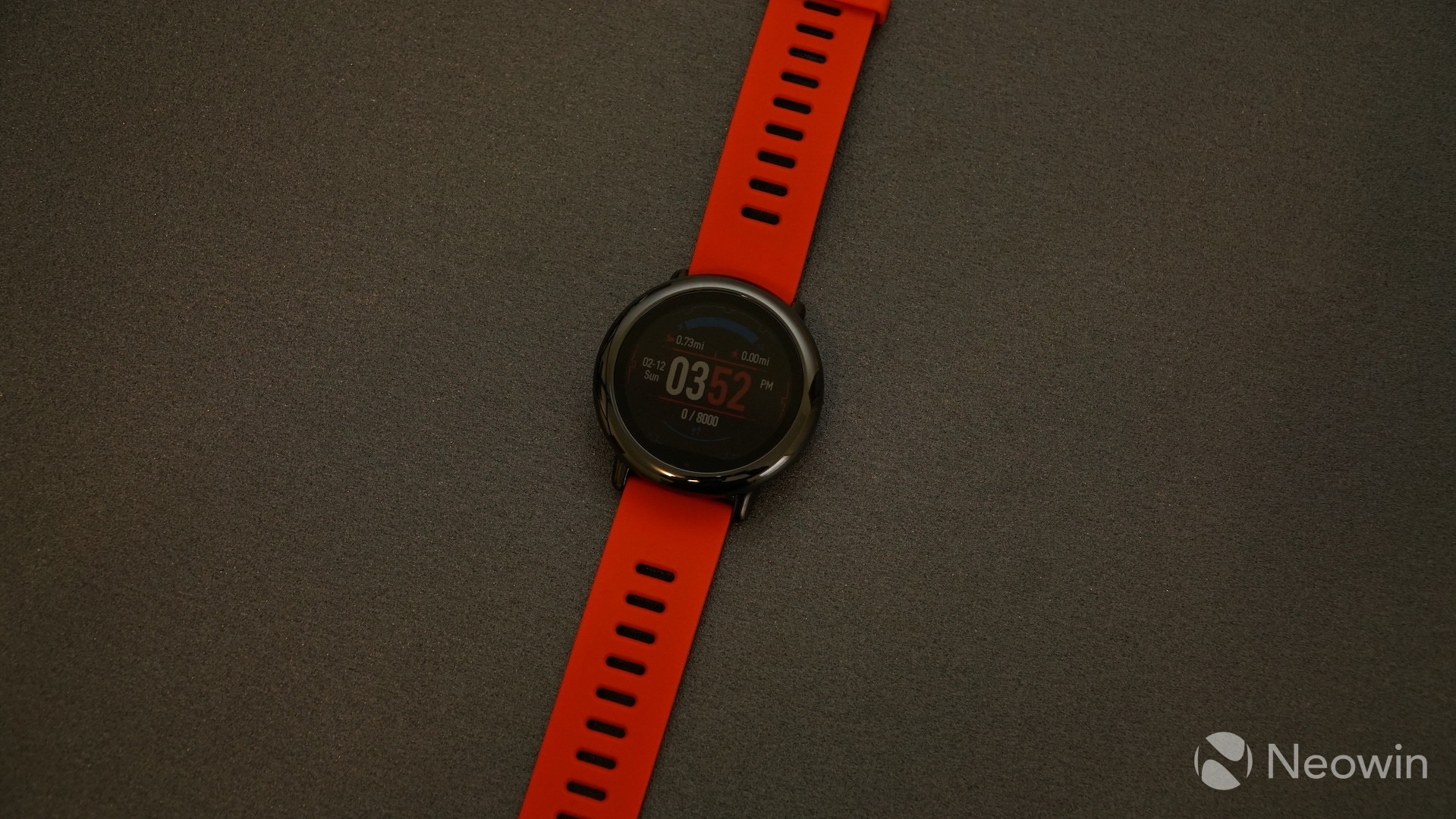 While the watch isn’t extremely quick, it isn’t slow either. For the most part, it performs how you would expect, but it does stutter every now and then when shifting through menus. The watch doesn’t offer a complex arrangement of options, so it really shouldn’t come as a surprise that everything, albeit in basic form, works fairly reliably. 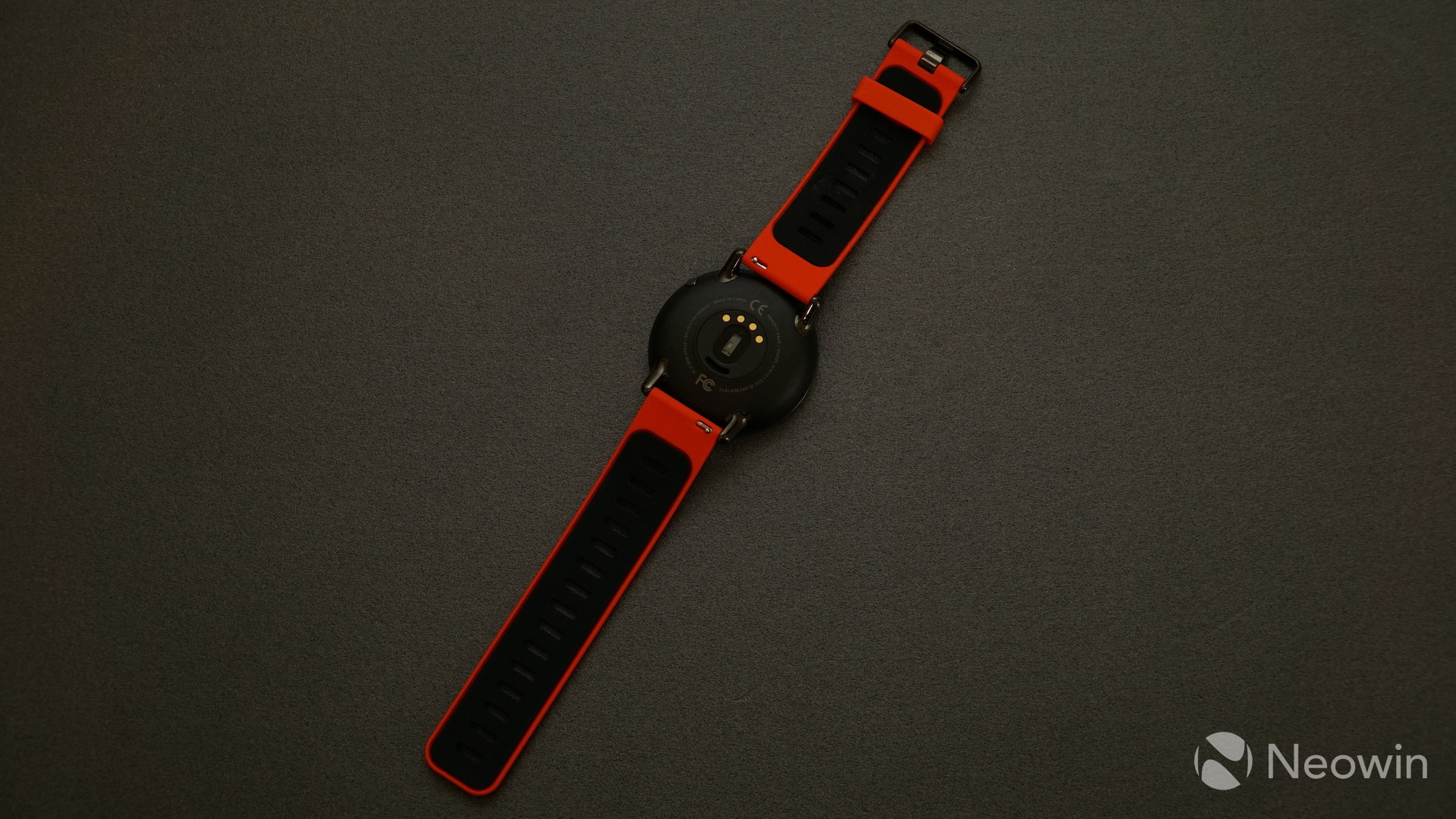 The battery life is where the Pace shines, as it can easily get you over four days with regular use, and a couple days more if you’re a light user. If you are someone that utilizes the GPS feature often you’ll get a little less battery life, but for those using the watch normally and occasionally exercising, you should be able to get at least four days.

The watch estimates that if you use tracking with GPS, you can get a full 35 hours or 199 miles before the watch will die. Personally, I did not test this out, as I am not an ultra marathoner. As far as charging goes, the watch has its own cradle that connects by snapping the watch in and uses microUSB. It roughly takes about two hours to charge the watch from zero to 100%, which isn’t bad at all for a battery life that will effectively last you about a working week. 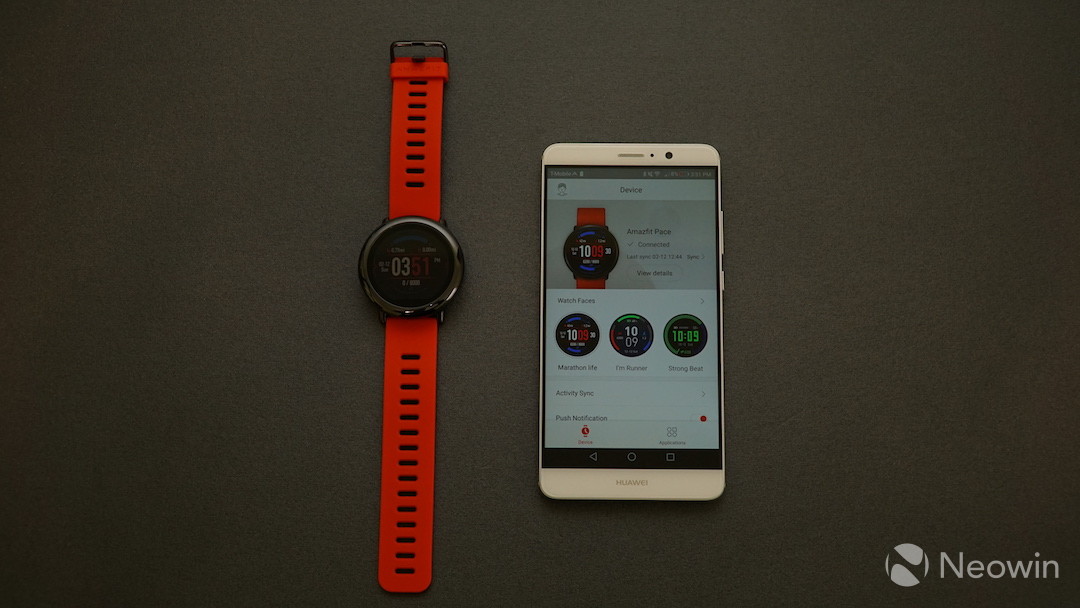 Overall, the AmazFit Pace is a decent offering but really suffers due to its software. This is a wearable that is focused on the ability to track fitness, sleep, and other metrics - but you can’t at the moment export a majority of that data. As far as the physical aspects of the device, it feels good wearing it on a daily basis and also feels solid in hand. While this would be a good device as an entry level offering, it isn't priced as such and would be hard to recommend considering there are other qualified products from more established companies like Garmin, Fitbit, Polar, and more.

While it isn’t a great product now, there is always the potential that it can get better when it receives updates. Oddly enough, I did some light searching online and it appears that the Asian variant has received updates that have greatly improved the watch, which seems to just add frustration for US buyers.

This is probably one of the key components of any product - its support from the company. If support is not offered for the product, it makes it an extremely risky purchase and with something a bit more complicated like the Pace, it can effectively be DOA. Hopefully the company can address this at some point in the future, otherwise, it is probably best to choose an option that is more familiar, with better support.