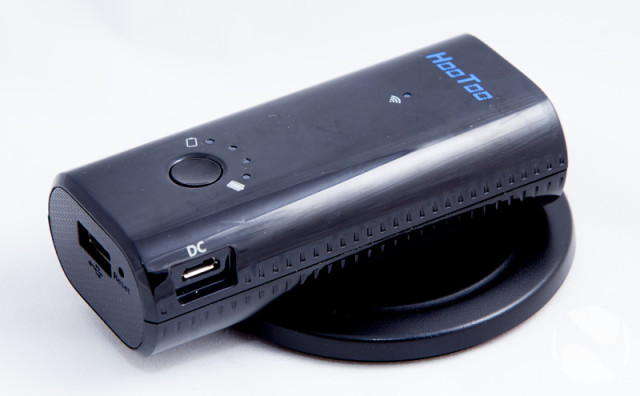 We live in a mobile, wireless world. But we still require a cord to charge our devices, and that can be difficult when we're on the road. In addition, many locations (especially hotels) have a wired Ethernet connection, but do not provide Wi-Fi, making the use of phones and tablets difficult. We've reviewed the Ontrion LifeCharge Pack, a device that can recharge your portable devices, various Amped Wireless products that can extend your network, and even Synology NAS devices. But today we're going to review a product that does a little bit of each for one of those products: The HooToo TripMate HT-TM01.

First, here's the specifications of the device, as provided by HooToo's website. 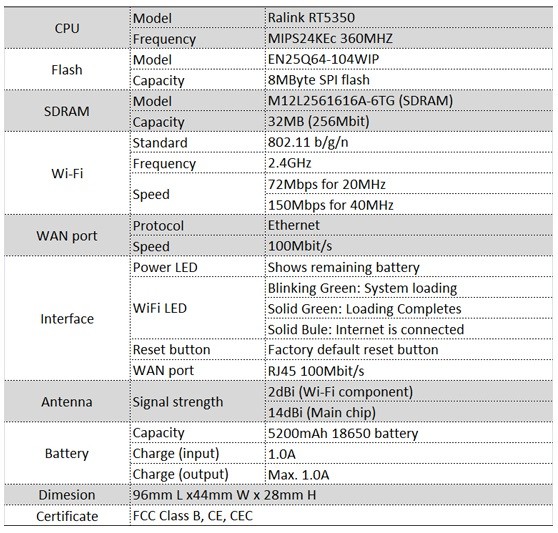 Although the list of specifications is detailed, most people probably won't care about how much memory or what type of CPU the device has. They'll just want to know answers to the following three questions: 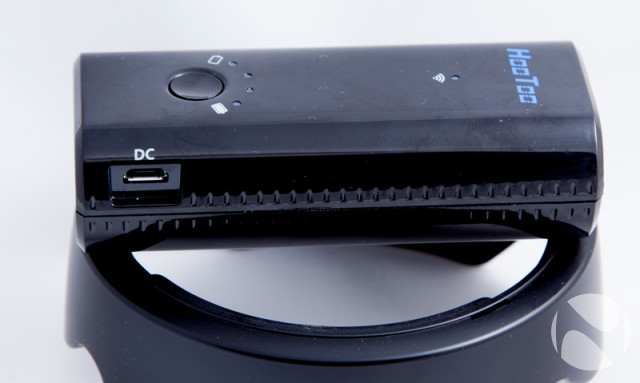 We'll attempt to answer these and provide some feedback on when you might want to use the HooToo TripMate.

How many times will it charge my mobile device?

This obviously depends on the device that you're charging. The larger the mobile device, the less you'll be able to charge it. The TripMate has a 5,200mAh battery, so has roughly 15% more power than the previously reviewed Ontrion LifeCharge Pack. In the real world, however, we didn't see much of a difference. We ran a similar test on the TripMate as we did with the LIfeCharge Pack, and we were able to charge the Samsung Galaxy S3 three nights in a row, with the last night getting close to a 100% charge. That means you'd be able to use your phone without a plug for an extended weekend camping trip if you were so inclined. 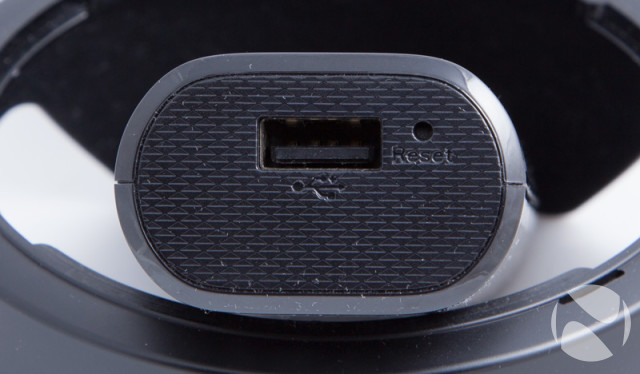 How fast does the TripMate charge up the phone? In my tests, I was getting roughly 1% of extra battery power for every two minutes of charging, based on the battery usage meter shown on the Galaxy S3. By comparison, plugging directly into the wall gave me roughly 1% of extra battery power for every 1.5 minutes of charging. This was an unscientific study: Regular background processes, such as Touchdown (email), were always running in the background, but the comparisons give a good ratio. These were pretty much the same results as with the LifeCharge Pack.

How well does the wireless work?

There are times when you're at a location that has Ethernet, but no available Wi-Fi. Some hotels, for example, have a single Ethernet cable in the room which works great if you have a laptop with you but is less useful when you want to connect a mobile device like the new iPad Air to the network. Other times, you may have friends over but not want them to know your Wi-Fi password. The HooToo can help in these cases. Simply plug an Ethernet cable into one end of the device, hold the power button down until the lights start flashing, then wait a couple of minutes. The device will act as an access point, allowing all of your devices to get on the Internet. This can also be used to share files by using it as a NAS device, which we'll discuss later. 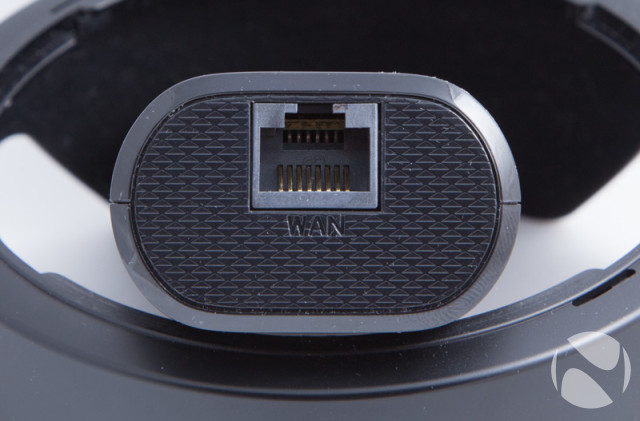 Performance was good, with consistent speeds at 37,000 kbps through the HooToo TripMate. By way of comparison, we get roughly 47,000 kbps through the 5Ghz connection on our Amped Wireless AP20000G, so while throughput isn't as high with the HooToo, it's still very commendable. Note that the TripMate uses the internal battery to power the network functionality, and up to five wireless devices can connect at a time.

That said, the range of the device is fairly poor. That's to be expected, since it's roughly the size of a candy bar and has no external antennas to help broadcast the signal. We saw our speeds drop in half at ten feet away, and drop down to 1mbps when we were 20 feet away. This device was clearly made to provide a signal to the room it's in, and not an entire house. 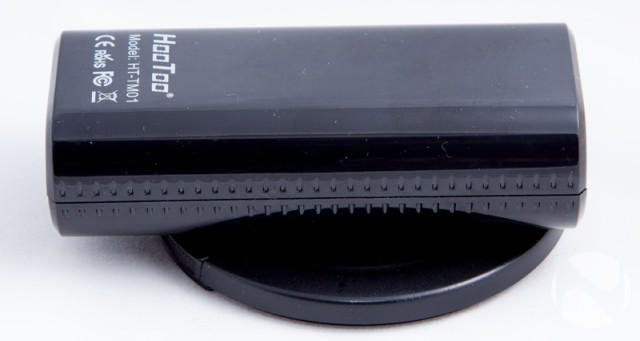 In addition to being used as an access point, the device has two other wireless modes: As a wireless bridge or a wireless router. In the case of the bridge, it can extend the range of an existing WiFi signal. Configuration is rather tricky, and with the limited range of the device, we don't see this mode being used for much. As a router, the TripMate connects directly into your cable modem or DSL router and provides the Wi-Fi signal in your house. In a pinch, this might be useful, but again, for most users we don't think the configuration difficulty will be worth the payoff.

Up until this point, the HooToo TripMate has been an amazing little device for the road warrior. The documentation makes the process sound easy: Turn off the TripMate, plug in a USB drive, power it back on, then launch the specialized HooToo TripMate application that you can download from iTunes or the Google Play store. 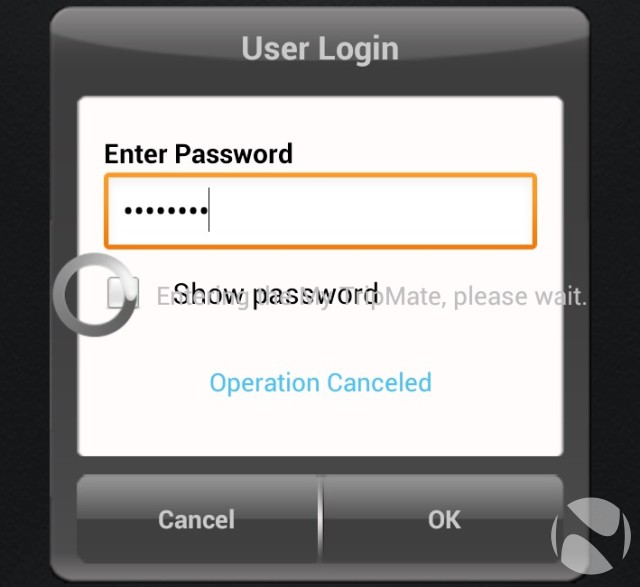 Sounds easy, but after 20 minutes, we were still unable to get our Samsung Galaxy S3 to see any files. Occasionally we were prompted for a password, but when entering the default TripMate password, we received an error message, and frequently during our testing, words were overlapping each other on the screen. Overall, the application didn't feel very polished on Android, but we were unable to test it on iOS. Keep in mind that the software is not available in the Amazon Kindle Fire store, so if you own that tablet, you probably won't be able to use this functionality either.

We reached out to HooToo about this issue, and they assured us that the feature works well and that it must be a faulty piece of hardware so quickly shipped us a replacement. We went through the process a second time: Plugged in a USB thumb drive, connected an Ethernet cable to the device, and held the power button down. When the TripMate was connected to the network, we fired off the app and, much to our surprise, we were immediately able to see our files! The interface actually worked pretty well too, allowing us to highlight multiple files and download them immediately to our phone. We're not sure what issues our original TripMate had, but we're happy to see that the replacement works flawlessly. 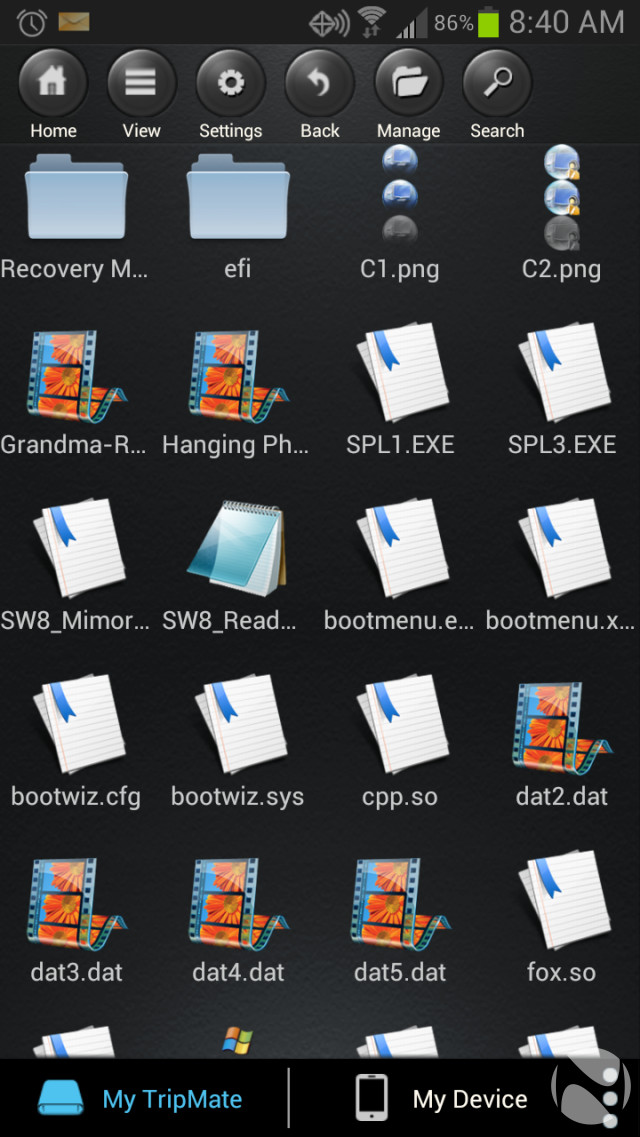 In addition, if you want to access the files via your PC/Mac, you can. Simply connect the HooToo to your network and you'll be able to see "TM01" show up as a network device. Select it, type "admin" as the username, leave the password blank, and you'll have full access to the files on the USB drive. It'd probably be easier to just plug the drive into your PC/Mac, but the option is at least available if you need it.

The HooToo TripMate is a very flexible device that serves many purposes, but configuration is difficult to manage via the web interface. While it works great out of the box, if you want to improve security by changing passwords, SSID, and such, you need to connect to the device's WiFi and point your browser to 10.10.10.254. That means you probably won't be able to use your desktop browser to configure the TripMate, and unfortunately, the configuration pages don't render well on the Galaxy S3.

That said, you can also make configuration changes via the HooToo TripMate application, downloaded from Google Play and the iTunes store. This interface is much easier to use to change passwords and such, although seems to lack some functionality compared to using a browser.

The HooToo TripMate is a jack of all trades. At its heart, it's a mobile device charger, similar to the Ontrion LifeCharge Pack and the upcoming Mimoco BatteryBot, and that's something it excels at. It also packs in Ethernet to Wi-Fi which, while of more limited use, can definitely come in handy for the road warrior. It handles this networking with ease and is a great compliment to carry around in your bag while on vacation. Being able to take data from a USB thumb drive and download it directly to your mobile device is also pretty cool, although we suspect it's of limited practical use and don't see ourselves using that feature very much.

When compared to other power chargers, this device brings the heat and delivers, while also giving us a little extra in the way of Wi-Fi networking and filesharing. We also wish the UI was a little cleaner, and we're a little concerned that we received a defective unit the first time through. Still, based on the fact that the TripMate costs a mere $50 at Amazon, only $5 more than the Ontrion LifeCharge Pack, we're going to say that the device offers a great bang for your buck.