The most common reason to purchase a NAS device for your home is to keep control of your data, rather than handing it over to a third party like Google or Amazon to store and process for you. In addition to simply storing data, modern NAS devices (like the recently reviewed Synology DS1517+) offer many other compelling features, like Plex, databases, web servers, logging stations, and more.

Earlier this week, Synology announced three new applications that install on DSM, the operating system that powers their NAS devices. The first, Drive, is a rewrite of Synology's Cloud Station Suite. It streamlines the process of syncing data across multiple devices so that your files are always available on the NAS. The second, Moments, is used to help organize your photos automatically (think: Google Photos running in your house). The last new application, Office, is a browser-based productivity suite (think: Google Docs). Both Moments and Office build upon Drive, utilizing its functionality for the backend storage.

Let's take a look at all three of these new features.

At the core of all of the updates is Synology Drive, which acts like a combination of Dropbox and File Explorer. It's installed automatically as a dependency when you install the Moments or Office apps that I'll talk about below.

When you install it on your Synology NAS device, you won't really see much other than a file manager. You can see the folders you have access to, and then standards like recent files, and the ever popular Recycle Bin. Unlike the traditional File Station, Drive streamlines the view and removes a layer of complexity for most users by not showing every file on the NAS but rather just your own Drive. 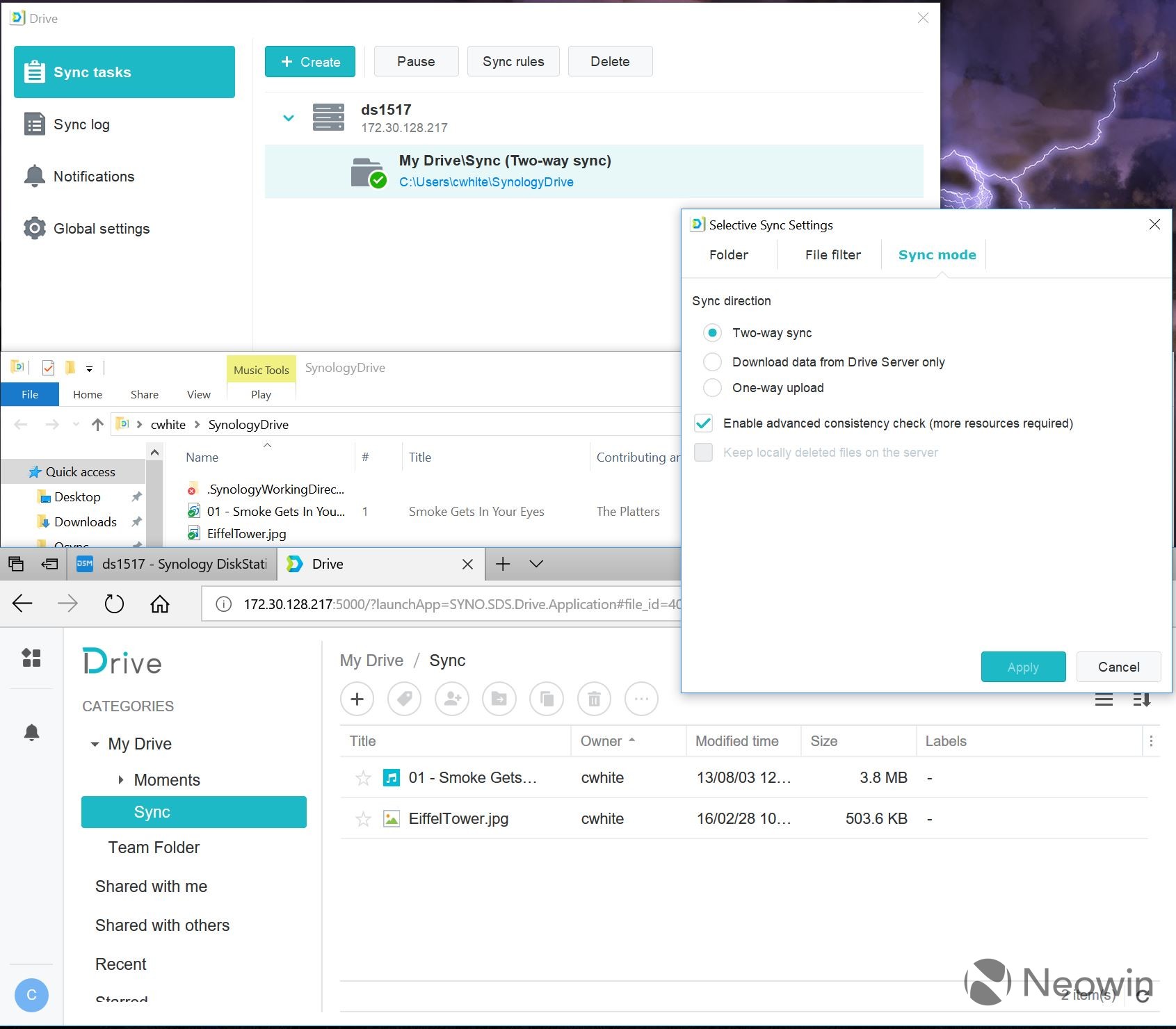 There are also mobile and desktop apps that help provide easy access and extra functionality to your Synology Drive, and the desktop version is available on Windows, MacOS, and Linux. While the mobile app seems like little more than a file explorer, the desktop app adds the ability to sync files between a folder on your desktop and the Synology NAS, which acts like a personal Dropbox account for those who don't want to share their data with a third party. This is also a great way to make sure specific folders on your system are automatically backed up to the central repository.

Overall, once you install and configure Drive, it's the type of tool that you generally won't directly interact with, but it provides the bits and pieces behind the scenes to allow Synology to provide more cool functionality with other tools like Moments and Office.

We're taking more photos than every before, and oftentimes they end up sitting on your phone and never seeing the light of day again, aside from an occasional share on social media. The biggest problem is organizing thousands of pictures is a difficult task, and manually updating them based on content is a hassle. Many people use Google Photos to do some of this work for them, since it provides automatic backups, has facial recognition to automatically tag your friends and pets, and allows people to share their pictures with friends and family. The downside, as with all cloud providers, is that you are no longer in control of your data. Enter Synology Moments.

Moments is basically a Google Photos clone, and while not quite as full featured yet, does a surprisingly good job of organizing your photos. Synology's press release touts that Moments uses "deep learning technology to automatically identify people, places, and objects in photos and sorts them into albums accordingly," and while they don't explain what "deep learning technology" means, the tool does work very well. 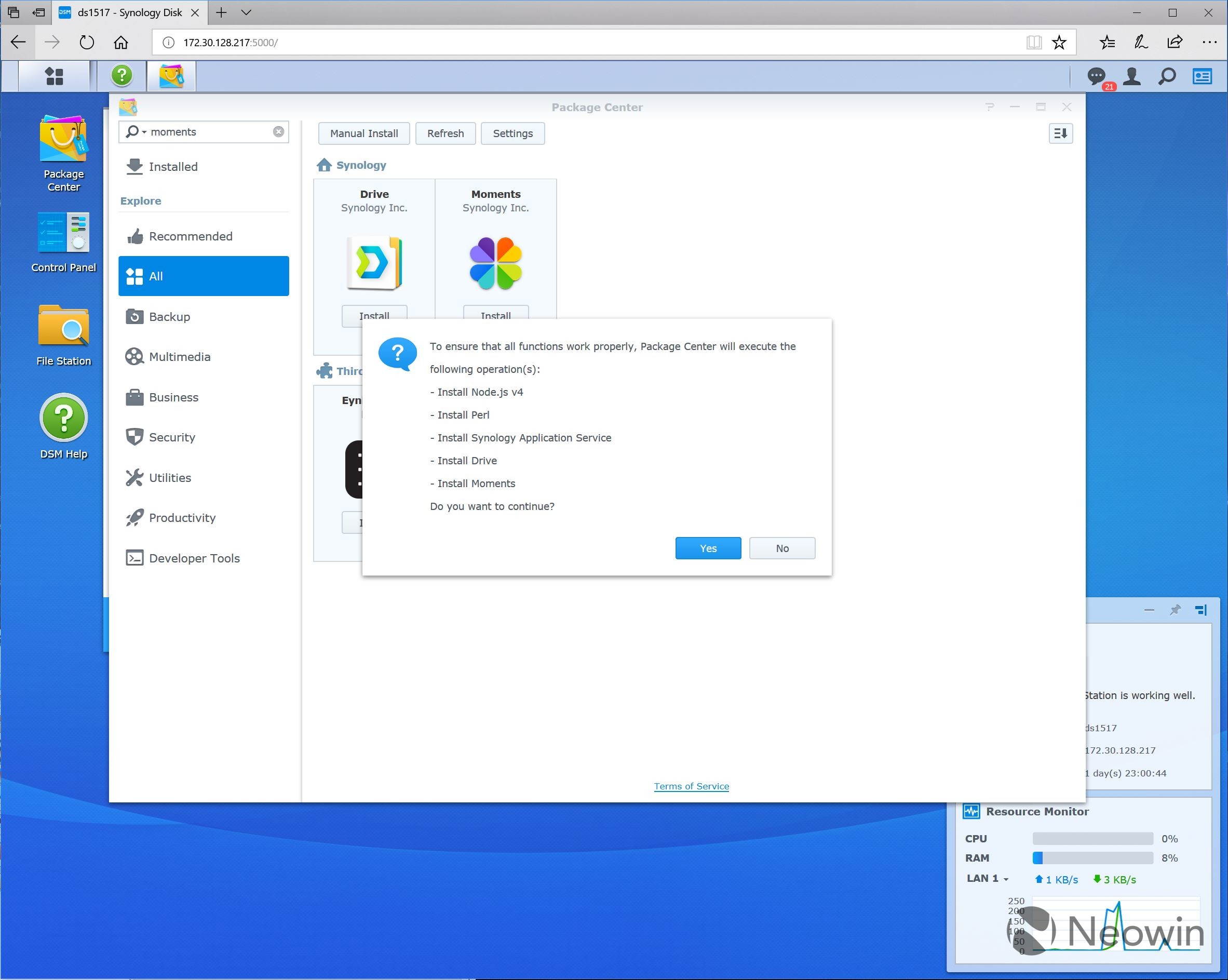 Installing Moments will automatically install other components, including the aforementioned Drive, but the process is just as easy as installing anything else on a Synology NAS device. Once installed, uploading photos into Moments is as easy as clicking the plus sign in the upper right hand corner. Moments works well on a variety of file formats, including RAW files, which is great to see. The application also accepts videos, but doesn't seem to analyze the video, instead only putting it in a Video category for you.

Once uploaded, your NAS device will get to work analyzing the files and automatically tagging them based on the content. After uploading a few hundred photos, the CPU on the DS1517+ was pegged at 100% for awhile, and performance utilizing other features of the device were a little sluggish, but still usable.

While the device is chugging through the images, you can go into the Albums section and see in real time as it categorizes what it finds. It automatically puts people's faces into a group and when it doesn't recognize someone, it simply says, "Who's this?" underneath a picture of the person. Click on the question and you're prompted to type in the person's name. The whole process is very simple and convenient.

Moments is very good at facial recognition. For example, it examined pictures of me both with and without facial hair and was able to put them together in the same group and it did the same with my wife, regardless of her hair style or color. 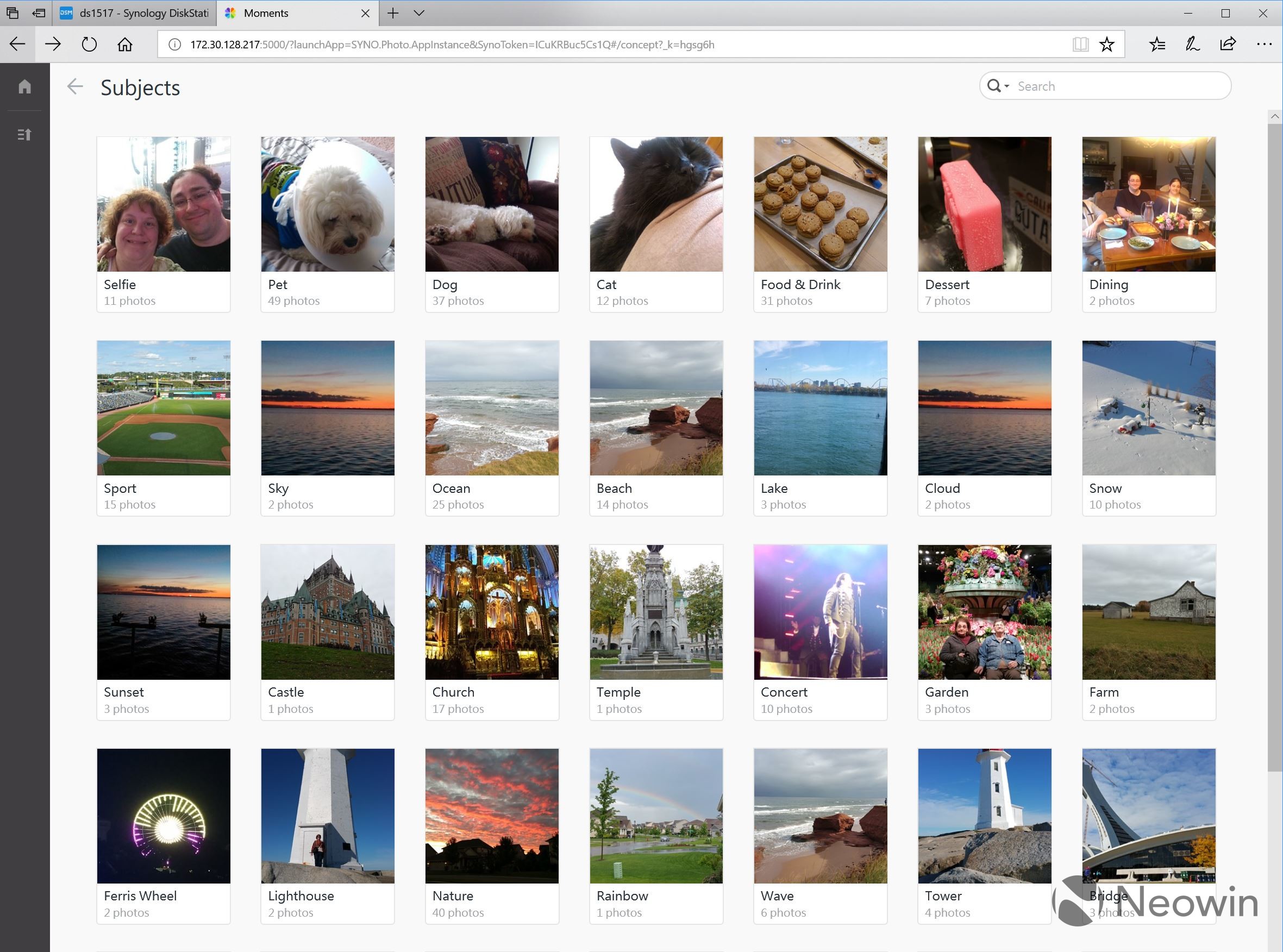 In addition to facial recognition, Moments also tags images based on the subject. For example, if it sees flowers, it will label the image as a garden; if there are clouds, it will tag it as such; and if there's snow (which we have a lot of here in Minnesota), it will categorize that for you as well. While the categorization works extremely well, there does not seem to be a way to correct it when it makes a mistake.

Based on the default albums, it looks like Moments is supposed to use geolocation to tag where photos were taken, but that section was always empty and there didn't appear to be a way to manually add photos into this section. I suspect this is either a bug, or a future feature, although I wasn't able to get clarification on this from Synology.

While you can manually upload files from your desktop, Synology also has a mobile app you can use as well. The real advantage here is that it can be set to automatically upload photos to your NAS device. You have the ability to determine if you want to limit uploading to Wi-Fi only in order to save your data plan, whether you only want to upload photos (skipping videos), and what to do with duplicate files. In addition, you can have the uploads only occur while your mobile device is charging, a feature that Google removed from their application. 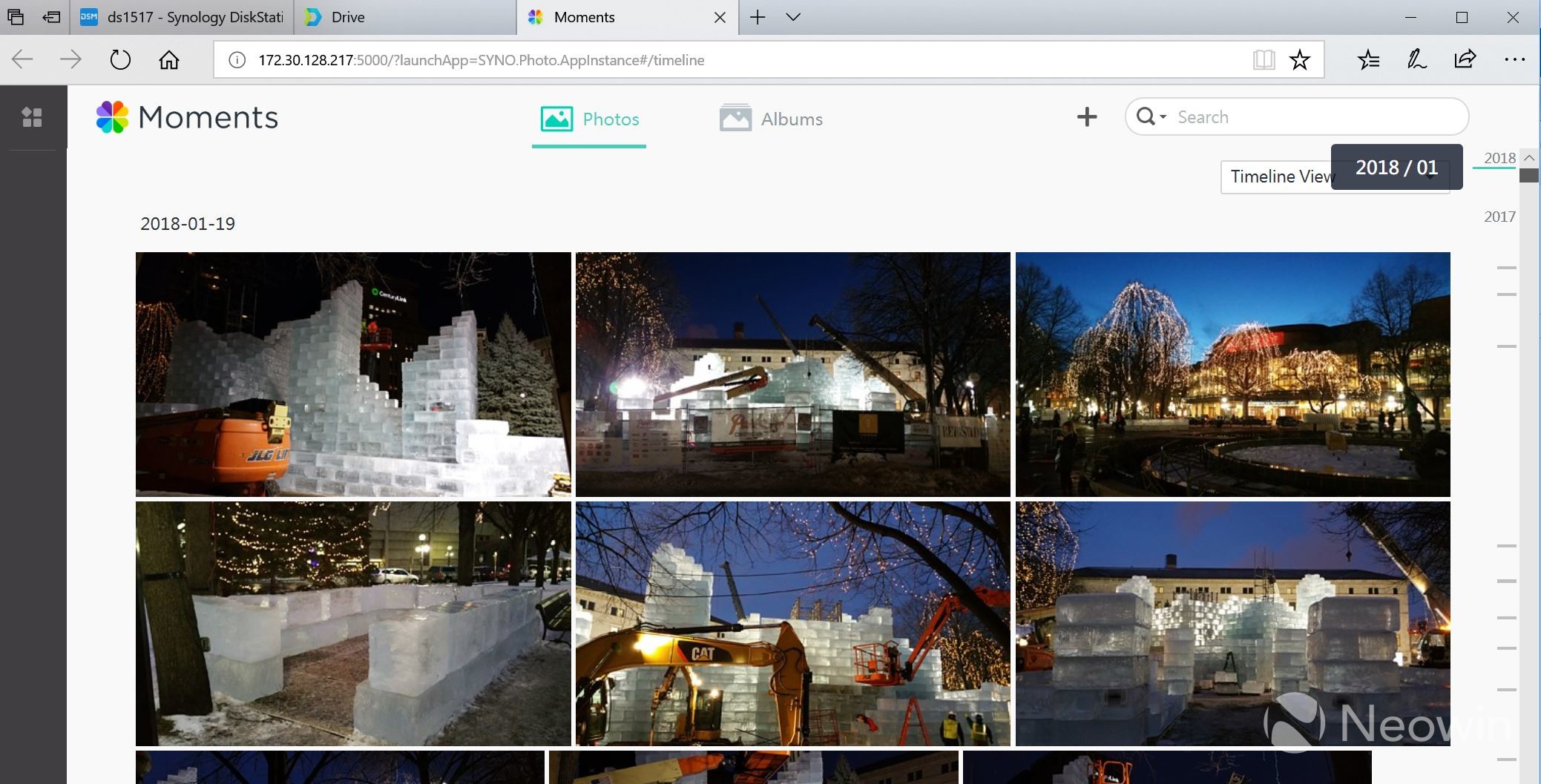 Although this is a great first version of the application, there are still some quirks that will need to be ironed out and some other features that Synology will have to release if they want to stay competitive with Google. For example, while Moments can correctly identify a dog or a cat, it can't recognize that it's YOUR dog or cat like Google can, and given how much people love their pets, this is something Synology will need to add. Searches appear to use an "OR" instead of an "AND," meaning if I search for "cat and dog," it shows images with either a cat or a dog in them. In addition, there does not appear to be an easy way to remove an incorrectly applied label, nor to remove tags from people. These are all software features that I suspect Synology will be adding in the near future.

Where Moments is primarily a consumer-based tool, Office will be mainly of interest to those in an SMB environment. Acting as a replacement for Microsoft Office (or Office365), the not-so-subtly named Office gives users on the network the ability to edit documents, spreadsheets, and slides (still in beta) via the Synology NAS device, both alone as well as collaboratively. If you've ever used Google Docs, you'll find that Synology Office works the same way. 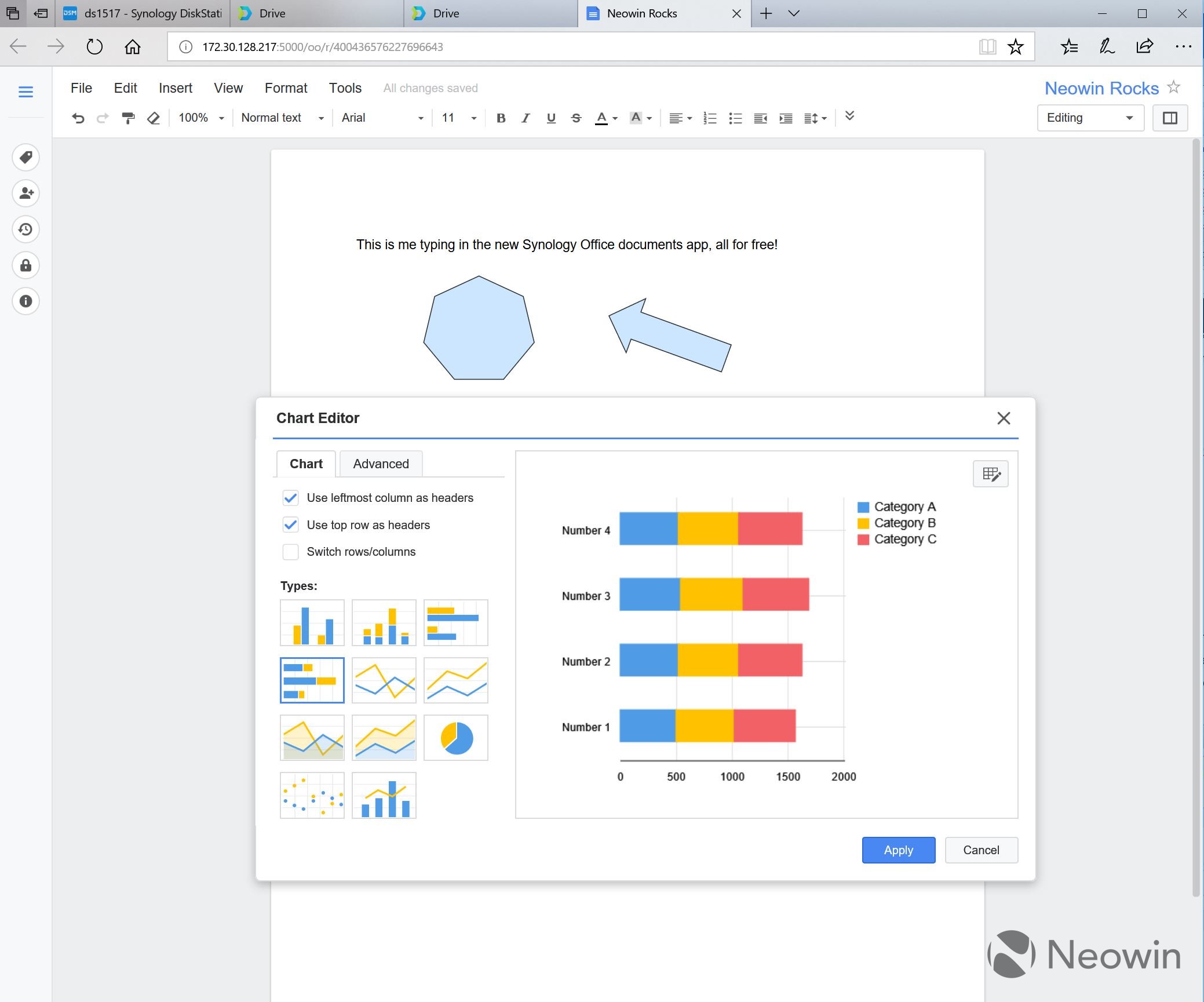 The tool works within a web browser and allows users to type up documents, create spreadsheets, and make presentations. The real power is with the ability to collaborate with others. Simply share the document with friends and coworkers, and everyone can read and edit it in real-time.

While Synology Office doesn't have all of the features of Microsoft Word, it has everything that most people would use on a day-to-day basis, and over time I'm sure more features will be added to meet the needs of niche groups.

It's clear that Synology realizes they must compete not only on a hardware front, but also on the software front as well. With tools like Google Docs, Dropbox, and Google Photos being offered to users for free, Synology is trying to bring that functionality inside your own walls to give you full control over all of your data.

If you currently own a Synology NAS device and have a need to manage your photos and documents, I'd highly recommend looking into installing Moments and Office. While both of these tools are missing some functionality, for a version 1.0 product, both tools hit the ball out of the park and provide yet another compelling reason to have a NAS device in your home or office. At the price point (free!), it's a no brainer to try out.

If you don't currently own a NAS device but have been on the fence about purchasing one, this might be the extra motivation you need to finally pull the trigger.